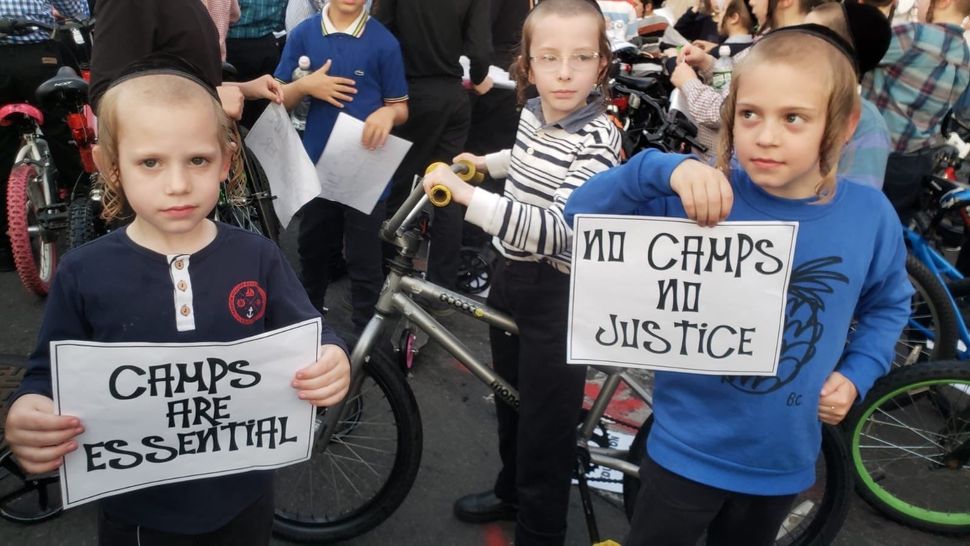 Videos and photos showed a crowd of children, mostly boys with sidecurls and kippot, walking and biking along Bedford Avenue, Taylor Street and Lee Avenue in the Williamsburg neighborhood. Some hold signs that say “Our education masters,” presumably meant to say “Our education matters.” Other signs say “No camps, no justice” and “Camps are essential.”

A WhatsApp message sent to the Forward asked demonstrators to bring along signs that say “Kid Lives Matter.”

Jewish organizations, mostly Orthodox, have been pressuring de Blasio and Cuomo to open sleepaway camps. Those camps, many of which serve the state’s substantial Jewish population, have been ordered to remain shut due to the present risk of coronavirus.

Simcha Eichenstein, an Orthodox Jewish state assemblyman representing Borough Park, is one of the individuals leading the charge to open sleepaway camps. A group of more than 50 camp directors have written letters to officials asking them to open as well.

Orthodox families often have six or more children, and with distance learning in effect for the last few months, Jewish families (like all families) are looking for a break. Multiple Hasidic yeshivas remained open despite the state and local laws that closed schools due to the coronavirus outbreak.

Another protest is scheduled for 2 p.m. Friday, according to social media posts.