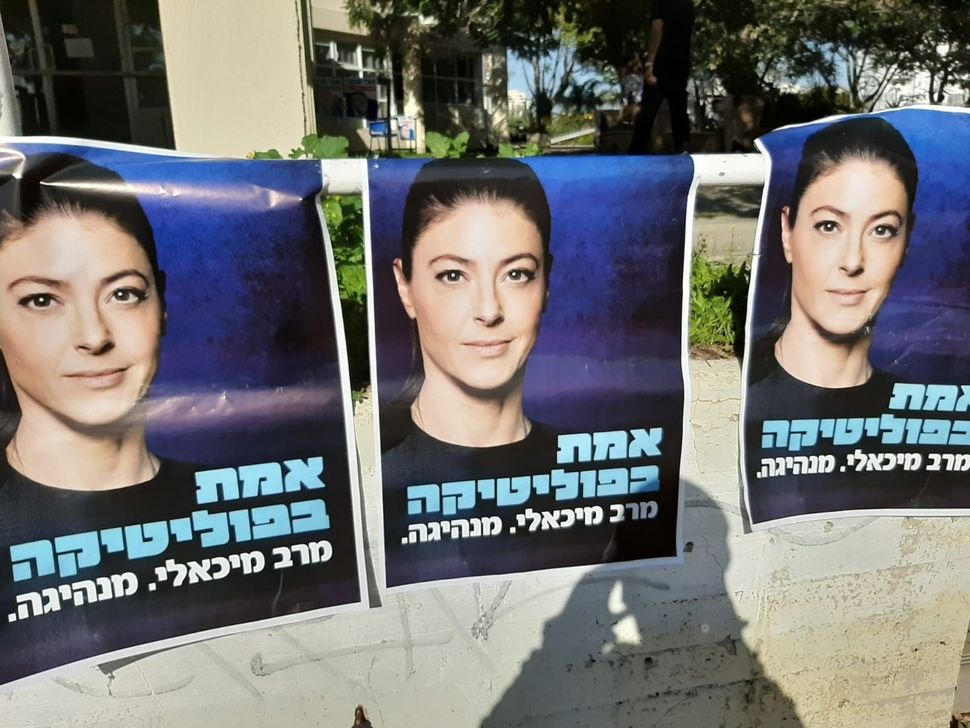 Merav Michaeli, the Knesset member elected on Sunday to lead Israel’s beleaguered Labor Party, cleared her schedule last Wednesday to watch Kamala Harris be sworn in as the first female vice president in American history. For Michaeli, a former journalist and staunch feminist, this glass-ceiling moment was very important.

“This gives other women the example, the power and the strength to look up and see that it’s possible and to follow suit and also fight for the things that they want to see happen,” Michaeli explained in an interview on Friday.

“The most important thing that I can do for women and for equality is to gain a lot of political power for our side of the map,” she added, “so that when we once again get back into power to change the system the way it should be changed in order to allow women the rights that they deserve.”

Michaeli, 54, is the second woman since former Prime Minister Golda Meir to lead Israel’s founding party, and she takes over at a challenging time. Labor currently holds only three of the 120 Knesset seats, after several efforts to revive Israel’s moribund left wing with new parties and mergers have failed to gain traction.

With yet another Israeli election slated for March, Michaeli has a big mountain to climb: recent polls show Labor in danger of failing to meet the threshold of 3.25% of the total votes cast required to secure any Knesset seats. In the interview, she attributed the poor showing to the former party chairman, Amir Peretz, having joined Prime Minister Benjamin Netanyahu’s government as economy minister, breaking a promise not to be part of the government whose leader was under indictment.

“My first mission is to make Labor stand on its own feet and pass the threshold on its own merits,” Michaeli said, and indeed a poll published on Sunday suggested confidence in her leadership, with Labor projected to land four seats.

“The reason that Labor is so low under the threshold for recent months is because its recent leadership committed maybe the most cynical and harsh betrayal in voters’ trust in the history of Israeli politics,” Michaeli explained. “But now that there will be new leadership that brings back values to the party and really rehabilitates the party’s vision that people know they can really trust, I have no doubt that it will become again a home for a million voters who right now are homeless.

Michaeli joined Labor in 2012, after its former leader, Ehud Barak, split the party to maintain his alliance with Netanyahu and serve as his defense minister.

Labor won 15 seats in the 2013 elections, and 24 two years later, when it was part of a coalition known as the Zionist Union. But its fortunes have plummeted since: the party won six seats in the April, 2019, elections, and last January joined forces with the far-left Meretz, when both parties seemed in danger of not making the electoral threshold.

Following the March 2020 election, one of the four Knesset members of Labor, Orly Levy-Abekasis, split from the alliance to join Netanyahu’s right-wing bloc. After Peretz, too, became part of Netanyahu’s government, Michaeli vowed to keep true to her values and remained the only party member in opposition.

She said on Friday that she chose to take on the official leadership role in order to “revive and rescue” the party, which has about 37,000 registered members. On Sunday, she won 77% of the nearly 10,000 votes cast, beating Avi Shaked, an ally of Peretz, and Gil Beilin, the son of Yossi Beilin, a longtime Knesset member and minister from both Labor and Meretz.

Michaeli said her next step would be to discuss a merger with other parties to ensure votes don’t go to waste for the center-left bloc. The Israeli news channel Kan 11 reported on Sunday that she is likely to sign an agreement with a new party, called The Israelis, that is led by Mayor Ron Huldai of Tel Aviv.

Michaeli said she hoped that a strong showing in the polls in the coming weeks would help her negotiate “from a position of strength.”

In the interview, Michaeli acknowledged that it was a longshot to imagine the center-left would get a majority of the vote to oust Netanyahu, Israel’s longest-serving prime minister. “I don’t think it’s clear that there will be such a possibility,” she said. But she said her party would be part of any effort to form an alternative government, even if it means joining a coalition headed by Netanyahu’s conservative rival, Gideon Sa’ar.

“Sa’ar believes in things that I think are dangerous for the state of Israel,” she acknowledged, “starting from annexation, through his views on the judicial system, and ending with his social economic views that are very much to the right, as well as his views on freedom of religion.”

“But he’s not indicted,” she noted, referring to Netanyahu’s ongoing trial on corruption charges. “And if our No. 1 priority would be to oust Netanyahu, it will have to be considered.”

Repairing the relationship between Israel and the American Jewish community is another top priority. To that end, Michaeli said that change Israel’s approach to religion and state to allow civil marriage and recognizing all forms of conversion is “an urgent matter that Israel needs to do for itself before it can rehabilitate its relationship with Jews around the world.”

“It is an absurd and tragic thing that the only country in the world that does not treat all Jews the same way is the Jewish State,” she added.

At the same time, after four years of a lovefest with President Donald Trump, she said. Israel’s leadership and public also has to recognize “the other half” of the American political spectrum — the Democratic Party.

“It’s high time that these relationships are repaired and we go back to mutual respect,” she said. “That whatever differences we have, we discuss them behind closed doors while maintaining the very important strategic alliance between the two countries.”

The fact that the Biden administration has a lot of prominent Jews in key positions, “can certainly be used for bridging the growing gap between American Jews and Israel,” Michaeli said.

Michaeli doesn’t necessarily see the Labor Party, known as Avoda, as a twin of the American Democratic Party, but she said it is “certainly a close relative.” The difference, she said, is that while the Democratic Party has prevailed in regaining control of all branches of government, it is also in a state of figuring out its own identity. Labor, she said, “ideologically speaking is in a more coherent place.”

Her challenge, therefore, is to turn that clear vision into political power.

Michaeli said that she draws inspiration from President Joe Biden’s inaugural address, in which he called for healing and unity.

“I intend to put a lot of attention and effort into ceasing the constant identity fight in Israel to look at the common good,” she stressed. “I want people to stop looking at each other through their sectors. I want to talk about our joint interests — we have so many of them — and we have to go back to look at one another as human beings.”