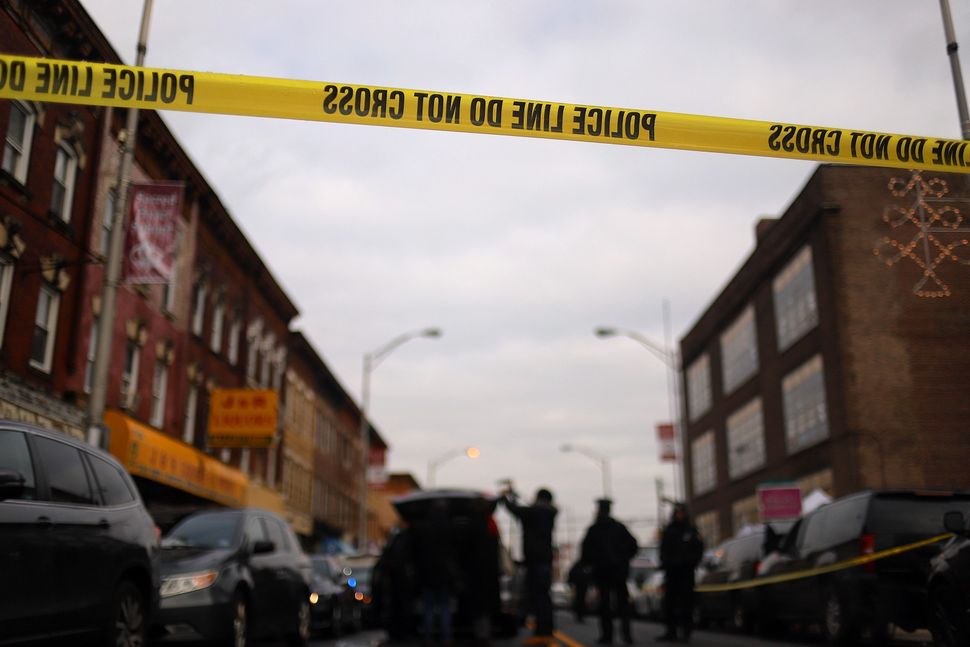 Detail of a police line band as recovery and clean up crews arrive to the JC Kosher Supermarket in the aftermath of a mass shooting on December 11, 2019 in Jersey City, New Jersey. Image by Rick Loomis/Getty Images

As the Jewish left and more conservative communal groups dig their heels in over the use of a controversial definition of antisemitism, a set of establishment organizations are trying to forge a middle path.

The Reform and Conservative movements joined with the Anti-Defamation League , World Jewish Congress and a handful of more liberal organizations in signing a recent letter to the Biden administration that packaged a limited endorsement of the definition with unrelated steps it could take to combat antisemitism.

“We’ve seen antisemitism weaponized in political terms,” Rabbi Rick Jacobs, president of the Union for Reform Judaism, said in an interview, “and it’s not helpful in stopping antisemitism.”

The fight over the definition, adopted in 2016 by the International Holocaust Remembrance Alliance, has exposed cracks in the Jewish community’s effort to stem four years of rising anti-Jewish bigotry and violence. Umbrella organizations like the Conference of Presidents have called on President Joe Biden to enshrine the definition in government policy, but progressive groups argue that it has been primarily used to shut down criticism of Israel.

“Not recognizing that IHRA is already out there and being used is impractical.”

The open letter, which was released on Friday, attempts to strike a middle ground. It calls on the federal government to use the IHRA definition only “as an education, monitoring, and training tool,” and not to enforce anti-discrimination laws, which the letter said could “punish Constitutionally protected, if objectionable, speech.”

Jonathan Jacoby, who leads an antisemitism task force at the University of Southern California, said the letter was an attempt by centrist groups to put the brakes on a right-wing move to codify the IHRA definition into either law or other widespread adoption by the White House.

He said that was a more effective approach than the one taken by activist groups like IfNotNow, which is primarily focused on opposing the Israeli occupation but is launching a campaign against the definition called “Fight Nazis, Not Students.” J Street U, the college arm of the liberal pro-Israel group, circulated its own open letter Monday from students opposed to the definition.

Ken Stern said in 2019 that the IHRA definition was “never intended to be a campus speech code.”
He’d know- he wrote it. pic.twitter.com/cLbKlfs2PK

“Not recognizing that IHRA is already out there and being used is impractical,” said Jacoby, who believes the definition is useful when paired with other materials. “The more pragmatic approach is to say, ‘Use it — but use it wisely.’”

The letter, which was signed by seven members of the Conference of Presidents, follows two weeks of concerted effort by the umbrella organization to convince the Biden administration that the American Jewish community supports the IHRA definition.

The conference organized a Jan. 12 letter to Biden stating that all federal agencies should “consider” the IHRA definition, but it was only signed by five of the 50-plus member-groups, including the ADL, Jewish Federations of North America, American Jewish Committee and Orthodox Union. A week later, the conference announced that 51 of its 53 member-groups had “adopted” the IHRA definition, though it did not specify what that meant.

Alan Solow, a former chairman of the conference, said he saw Friday’s open letter as akin to a legal concurrence, when judges who agree on the final ruling in a case write independent opinions outlining distinct arguments.

“Frankly, the IHRA definition is not the only critical piece of combating antisemitism.”

“It’s always more powerful when we speak with a united voice,” Solow said. “But I don’t view this as being a significant schism.”

Jacobs said the Reform movement does not disagree with much of the substance of the conference’s Jan. 12 letter — which primarily focused on the definition — but signed Friday’s open letter because he and others thought it was important to outline a more holistic approach.

“Frankly, the IHRA definition is not the only critical piece of combating antisemitism,” Jacobs said.

The new letter, addressed to the Biden administration and Congress, called for:

The other groups that signed the open letter are the Central Conference of American Rabbis and Rabbinical Assembly, which represent Reform and Conservative rabbis, respectively, refugee aid group HIAS and the National Council of Jewish Women, which takes liberal positions on a wide range of issues.

While the conference’s Jan. 12 letter and the one released last week do not directly contradict one another, the ADL was the only organization to sign both.

“ADL signed both letters to demonstrate the great support for the ​IHRA working definition, and its appropriate application, within the U.S. Jewish community,” an ADL spokesman said in an email.

The Conference of Presidents and the Jewish Federation of North America did not respond to requests for comment about whether they supported the priorities listed in the open letter. A spokesman for the American Jewish Committee, a broad-based advocacy group that leans to the right on Israel, declined to answer questions about it.

“American Jewish Committee has articulated its concerns and priorities about combating antisemitism in the U.S. and around the world directly to the Biden Administration,” the spokesman, Kenneth Bandler, said in an email.

Morriah Kaplan with IfNotNow, which regularly clashes with establishment organizations, said in a statement that the open letter was a “clear sign that leaders of the American Jewish establishment are reversing course” on calls for Biden to use the IHRA definition to make policy.

Jacob Blumenthal, chief executive of the Rabbinical Assembly, which represents Conservative rabbis, said he is hopeful that the letter helps build pressure for the federal government to tackle antisemitism while making clear that the Jewish community does not support restrictions on free speech.

“Sometimes there’s a need to be very direct: we oppose anti semitism in all its forms,” Blumenthal said, “and we also want our government to adopt policies and enforce them with nuance and with caution.”