A stretch of Devon in the late 50s, early ‘60s, back when Jews were flocking into West Rogers Park and it was the fastest-growing neighborhood in the city. Courtesy of Barbara Brotman

Myra Friedman clicked on the video, and there it was: the old neighborhood, the high school clubs, the gray jackets with pink lettering, the shopping trips to Woolworth’s and Kresge’s, the multiple synagogues.

The 1950s and ‘60s in Jewish Chicago were back, in a documentary playing on her computer in L.A., and on laptops, tablets, and smart phones across the country.

The documentary, “Driving West Rogers Park: Chicago’s Once and Future Jewish Neighborhood,” has been ricocheting around the internet, igniting a delighted wave of nostalgia among the retirees who were once teenagers there.

“Oh, my god, it brought back a lot of memories,” said Friedman, 76, who lives in Los Angeles and forwarded the link to another friend. “It was a great time.” 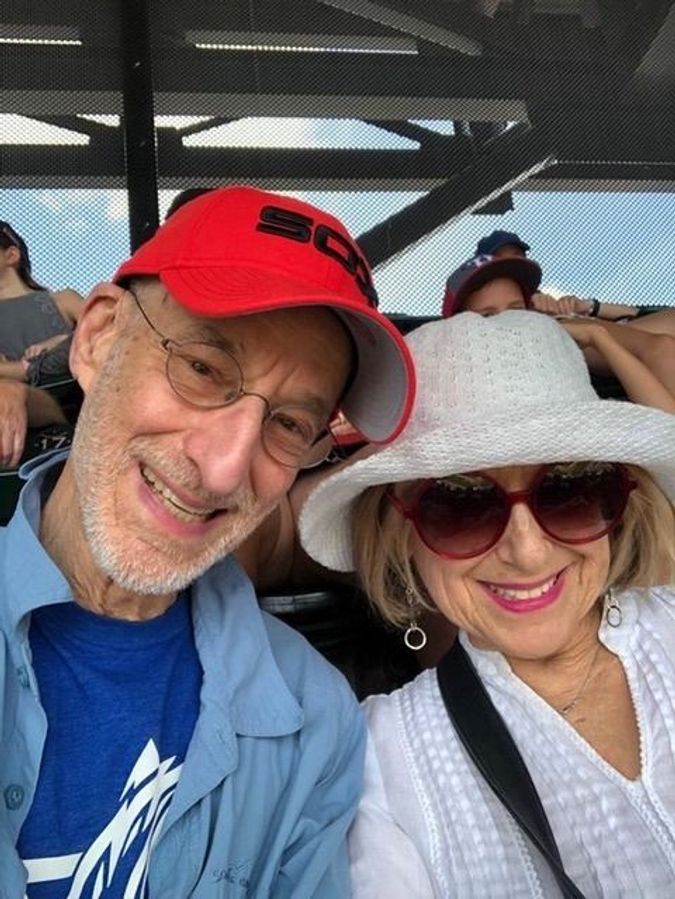 The film is the work of Chicago documentary filmmaker Beverly Siegel. She lived in West Rogers Park, a neighborhood on Chicago’s far North Side, as a teenager and lives there today. Siegel made the documentary to draw attention to the work of the Jewish Neighborhood Development Council of Chicago (JNDCC), where she is president, revitalizing the community’s business districts — and to tell the area’s remarkable Jewish story.

“Driving West Rogers Park” traces the neighborhood’s evolution from the bustling center of Chicago Jewish life in the 1950s and ‘60s, to that world’s disappearance as Jews moved to the suburbs, to the neighborhood’s modern-day rebirth as a largely Orthodox Jewish residential community with a busy Indian and Pakistani business strip. 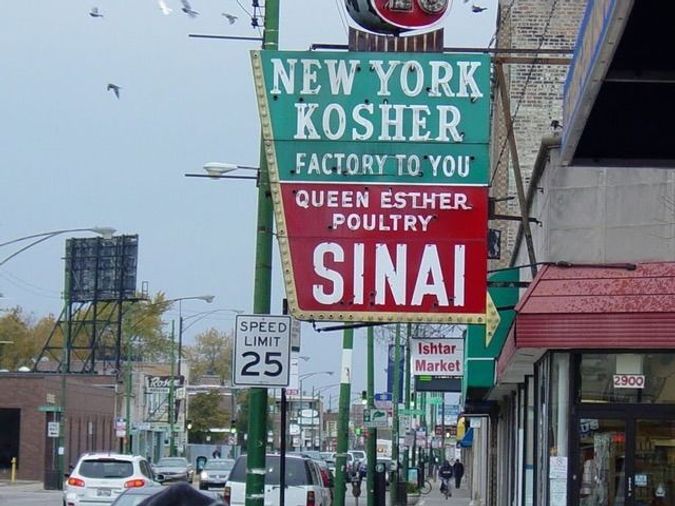 Devon Avenue in the 80s. Signs the neighborhood was changing. Courtesy of Irving Cutler

Siegel posted the 25-minute film on the JNDCC’s website via YouTube, and moved on to other tasks.

Then the emails started pouring in.

“All of a sudden, my video is going wild on YouTube,” she recalled.

The burst of attention came courtesy of Jerrold Dolins. Dolins, who was in the first graduating class of the much-loved neighborhood high school, Mather High School, maintains three separate directories of the first 1,350 people to graduate from much-loved Mather High School, which opened in 1959. He has another list of former Mather teachers, and contact information for hundreds of other onetime West Rogers Park residents.

He sent a link to the JNDCC website to nearly 2,000 people in his directories living everywhere from the Chicago suburbs to Florida, Arizona, California, Montana, and Texas. They in turn sent it to their friends. Someone posted it on Facebook groups for people who grew up in West Rogers Park.

“It really exploded in terms of people sharing it and enjoying it,” said Dolins, 75, who today lives in suburban Buffalo Grove.

A stretch of Devon in the late 50s, early ‘60s, back when Jews were flocking into West Rogers Park and it was the fastest-growing neighborhood in the city. Courtesy of Barbara Brotman

The documentary captures a neighborhood that was an idyllic world for Jewish teenagers. Jews from Eastern Europe had first settled on Chicago’s West Side, then moved away—some to the South Side, most to the North Side.

Jews started moving into West Rogers Park, which is at the northernmost tip of the city, in the 1930s. It was still largely prairie. Builders began erecting single-family houses. By the ‘50s, fueled by the post-war hunger for home ownership, West Rogers Park was the fastest-growing area in Chicago—and an overwhelmingly Jewish one. The Jewish population soared to more than 47,000 in 1963. Jews made up 75 per cent of the neighborhood.

“Come Rosh Hashanah and Yom Kippur, the synagogues would fill up. Entire blocks would totally be quiet,” said Burton Paris, 77, another member of the first graduating class of Mather High School, who now lives outside Dallas. “It was filled with Jewish families. It was just wonderful.” 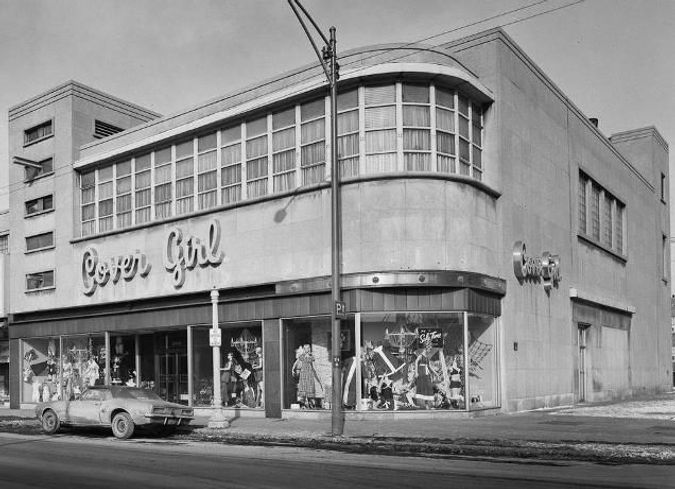 It was a great time to be young and Jewish in America, says Rabbi Zev Eleff, provost of Hebrew Theological College in Skokie and an associate professor of Jewish history for the Touro College and University System. “It was a post-Holocaust, post-war period of economic prosperity,” he said. “Jews felt like they were rightfully here. There was a sense that anti-Semitism was at a nadir. The establishment of the state of Israel and the Six-Day war led to an explosion of Jewish pride and identity.”

West Rogers Park exemplified mid-century Jewish life, says Kevin M. Schultz, chair of the history department at the University of Illinois at Chicago and author of “Tri-Faith America: How Catholics and Jews Held Postwar America to Its Protestant Promise.”

“There were neighborhoods like that in almost every major American city,” he said. “For American Jews who had come out of the anti-Semitism of 1930s and early 1940s, there definitely was an appeal to moving to a neighborhood where you could have more square footage, and also have a large number of Jews—where you felt safe and you wouldn’t be worried about your son or daughter finding a partner and potentially leaving the faith.”

But by the ‘70s and ‘80s, he said, most Jews were largely assimilated into American life and comfortable living anywhere. They moved to the suburbs or to farther-out suburbs.

And so it went in West Rogers Park. The close Jewish community of West Rogers Park dispersed. Between the loss of customers and the rise of malls, Devon Avenue withered.

On the side streets, however, a new Jewish world was emerging.

There were small numbers of Orthodox Jews already living there. More began moving in. They didn’t want to live in spread-out, car-centered suburbs, said Rabbi Leonard Matanky, who grew up here and is rabbi of the now-Orthodox synagogue Congregation K.I.N.S. of West Rogers Park. Orthodox families needed to be walking distance from synagogues and friends to visit on Shabbat.

With its dense housing and plethora of synagogues, Rogers Park was perfect for Orthodox Jews. And community and civic leaders instituted changes to make it even more attractive. An eruv was erected, enabling young families to carry their children on Shabbat. A zoning change permitted residents to expand their homes with large additions, accommodating large families. The business districts, however, have not thrived. That part of the story is personal for Siegel. When her husband, Howard Rieger, a Chicago native, retired as the New York-based president and CEO of the Jewish Federations of North America, he began spending more time at their West Rogers Park high-rise condo. He was taken aback at the difference between the residential areas and the business sections.

The new Northtown Branch of the Chicago Public Library that came about with the assistance of JNDC advocacy. Courtesy of JNDC

“I was totally struck by what I saw as a complete disconnect,” he said. “The commercial streets had all the markers of a declining neighborhood.”

A veteran community organizer, Rieger worked with residents, public officials, and community leaders to reinvigorate the public spaces of West Rogers Park. Siegel’s film showcases one of its successes: that abandoned corner is now a new park.

“It’s beautiful,” Siegel said. “And we had other projects like that. We created a multi-ethnic coalition and helped to get the neighborhood a gorgeous new library.” With Sunday hours, she added, to make it accessible to Jews who observe the Sabbath. 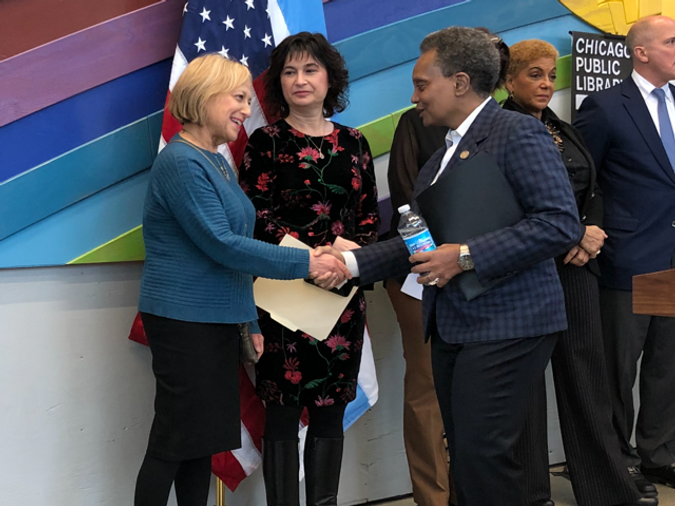 Beverly Siegel shaking hands with Chicago Mayor Lori Lightfoot at a press conference at the new Northtown Branch Chicago Public Library in West Rogers Park, December 2019. Announcing the launch of Sunday hours, which Siegel spoke to as significant for the Jewish community. Courtesy of Beverly Siegel

Today Devon Avenue is a bustling strip Indian and Pakistani groceries, sari stores and restaurants that draws customers from across the city and suburbs. The residential areas are about one-third Jewish, mostly Orthodox, teeming with young families, some 25 synagogues—one egalitarian, the rest Orthodox—and day schools and other institutions, many supported by the Jewish Federation of Metropolitan Chicago.

What makes West Rogers Park unique, Siegel says, is not just what it was, but what it is—namely, still Jewish.

“The traditional trajectory of Jewish neighborhoods in Chicago is that they rise, they reach their heyday—and then people start to leave. Eventually, all the Jews leave. And once it’s not Jewish any more, it never comes back.

“West Rogers Park defies that pattern. It’s growing again as a Jewish neighborhood.” Many of the former West Rogers Parkers who saw Siegel’s documentary were intrigued by their former neighborhood’s current iteration. Among the emails and Facebook comments:

I’ve been away from Chicago since 1965 and I am amazed at the transformation of West Rogers Park.

Glad to see the old hood is making a comeback.

Nice to see it’s bouncing back.

Which opens up new possibilities for the community’s continued revitalization, says Rieger. The JNDCC would love the old crowd to join the organization to support the new crowd. “It’s nostalgia that can be more,” he said.

Siegel is thrilled at the pleasure the film is bringing. “It’s this lovefest,” she said. “I’m getting emails from Texas, Florida, California. It’s such a treat to read them.”

The JNDCC would be glad to welcome them.

You can watch “Driving West Rogers Park” at the JNDCC’s website, https://jndcchicago.org/.