A Jewish labor leader on his union’s battle with Amazon 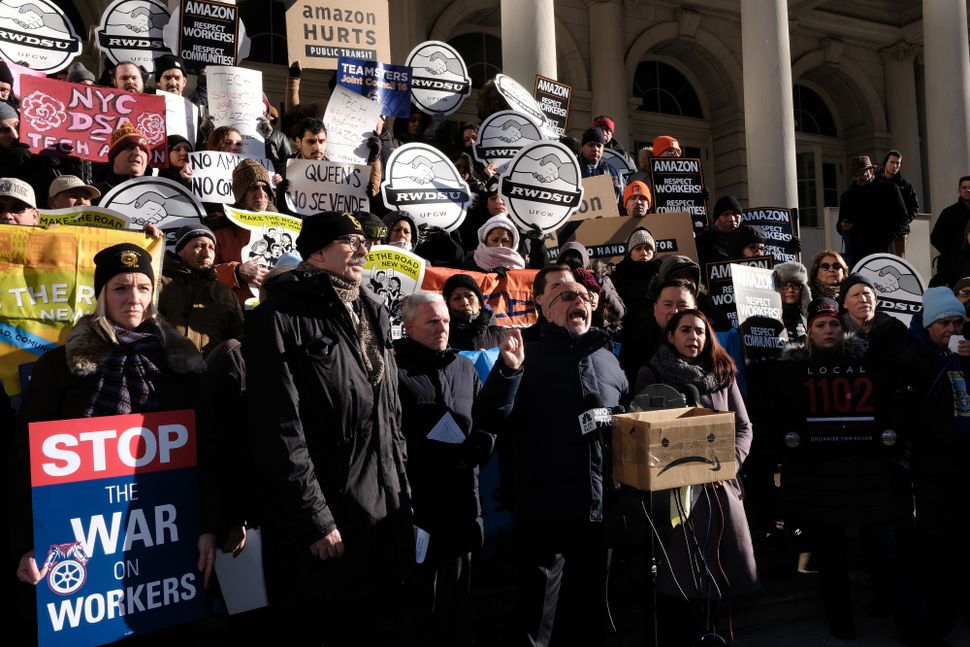 Stuart Appelbaum, president of the Retail Wholesale Department Store Union (RWDU), center, speaks during a protest against Amazon outside of City Hall in New York, U.S., on Wednesday, Jan. 30, 2019. New York’s city council held a hearing today to discuss the tax incentives behind Amazon’s HQ2 deal and the potential impact it could have on the city. Photographer: Sangsuk Sylvia Kang/Bloomberg via Getty Images Photo by Getty Images

The union election at an Amazon warehouse in central Alabama, which began Monday and will last for seven weeks, is being closely watched by both supporters and foes of organized labor. Workers at the facility have come closer to forming a union than any others in Amazon’s history, and a victory could have ramifications well beyond a single fulfillment center in the Birmingham suburbs.

“The importance of this campaign transcends this one facility,” said Stuart Appelbaum, president of the Retail, Wholesale, Department Store Workers Union (RWDSU), which is organizing the workers in Alabama. “It’s really about what the future of work is going to look like.”

Appelbaum, 68, climbed the ranks of the retail workers union starting in 1987, after working for the Democratic National Committee and Michigan AFL-CIO. He has been president since 1998. He is also president of the Jewish Labor Committee, and sits on the executive committee of the Conference of Presidents of Major American Jewish Organizations, as well as the national advisory board for J Street, the liberal pro-Israel group. The son of a postal clerk in Bloomfield, Connecticut, Appelbaum said he would read union newsletters cover-to-cover as a child. The family attended a Conservative synagogue where the rabbi’s sermons made an impression.

“I remember my rabbi telling us all work is honorable, regardless of whether or not you have a job that requires a college education,” Appelbaum said. “That’s normally not a message you’d hear in Jewish synagogues — you’d hear, ‘Everyone has to go to college.’”

I spoke with Appelbaum about the stakes of the Amazon organizing drive and the changing role of Jews within the American labor movement. Appelbaum is, unsurprisingly, hostile to the e-commerce giant and that is reflected in the interview. We have also reached out to Amazon to request an interview with incoming CEO Andy Jassy, who is Jewish. This conversation has been edited for clarity and length.

Many Jews came to the United States as working-class immigrants but their descendants have since ascended to the professional class: doctors, lawyers, business people. Is it harder to convince the Jewish community to support organized labor these days than it was 30 or 40 or 50 years ago?

Are we able to go back and talk to people about how their parents or grandparents were treated? Maybe. But I think what’s more likely now is that we have to talk about those things that as Jews we need to respect. I’ve got my little “sermonet,” which I really like, which is that tzedek tzedek tirdof — justice justice, you shall pursue — where the word is repeated for emphasis, so I feel the Jewish community as a whole will continue supporting working people. As it should.

How are you feeling now that ballots for the union election are in the mail?

I am so inspired by the workers at the facility in Bessemer who had the courage to stand up and say they wanted a union. We are watching one of the most aggressively anti-union campaigns that I have ever seen. Amazon’s propaganda is everywhere throughout the facility.

When you go to use the bathroom, they have placed anti-union posters at eye level if you are sitting on the toilet. They have people receiving five or more text messages from the company per day telling them to vote against the union. Amazon is holding captive audience meetings where they force workers to listen to lecture after lecture about why they should vote against the union. [Ed note: Amazon has stated it is opposed to workers forming a union and does not believe that a majority of its employees support joining the RWDSU.]

Why do you think Amazon is so opposed to the formation of a union at the facility?

That goes to the question of why the workers want to unionize. Amazon talks about the wages and benefits it provides — but it has also created a horrific working environment where people feel dehumanized and mistreated. People get their assignments from a robot, discipline via telephone app, and they get fired by a text.

There are stories about how people had to pee in bottles because they felt they didn’t have enough time to get to the bathrooms and still be able to maintain the required pace to keep their jobs. In some facilities, there’s greater than 100% turnover every year. Amazon’s business model is a simple one: feast on public subsidies, pay little or no taxes, and dehumanize and mistreat their employees. And they don’t want to change.

What makes this such a significant organizing campaign?

Amazon is an enormous company that is transforming industry after industry and we do not want Amazon’s model to become the model for the future of work. And if we are successful in this election, this is the sort of thing that could really spark an organizing movement in this country.

We saw a reporter post a video about the anti-union tactics at Amazon last week. It had 2.5 million views. This campaign is resonating with people all over the country.

They say Amazon is forcing them into anti-union meetings, texting them up to 5x daily, putting messages in bathrooms, even changing traffic light patterns to harm union organizing. pic.twitter.com/ADnYYm08B4

Why has it been so difficult for unions to make inroads at companies like Amazon, Target, Walmart?

Labor law in this country is geared to make it difficult for people to organize. Look at the way this election is being conducted. People come to work every day in a facility where they’re surrounded by only anti-union propaganda. They’re required to go to union-busting meetings as part of their job. The employer spreads rumors that the facility may close if the union comes in.

People know that every motion they make in an Amazon facility is being surveilled and they’re afraid that the employer is going to know exactly how they vote. Imagine if the presidential election was conducted in such a way that you had two candidates, but in order to vote everyone had to vote in just, say, the Democratic Party headquarters.

I also think we’re at a special moment in time. The pandemic has opened up a lot of people’s eyes to the need to have a union and a collective voice in the workplace. And this Amazon workplace is also about 85% African American and a lot of people have been inspired by the Black Lives Matter movement to stand up for themselves.

We’re at a moment of hope in this country now that we’re at the very beginning of a new administration that is working to reverse some of the most grievous problems of the past. So I think time is right and location is right.

Workers in your sectors — retail, warehouse, food service — are increasingly likely to be Black or Latino. How do you make sure everyone’s life experience and perspectives are heard while ensuring the union remains, well, unified?

Solidarity is the key word of the labor movement and that’s what attracted me to the labor movement early on. It’s one of the most diverse elements of our society. Integration and diversity were taken for granted within labor unions long before the same could be true about the rest of society.

I’m really proud of the way our union has always celebrated diversity. Something else: I’m a Jewish guy but one of the proudest things we did was to be the first union in the country to negotiate the end of Ramadan, Eid al-Fitar, to be a paid holiday in a union contract at Tyson’s poultry plant in Tennessee. I still get hate mail for it.

And what about the ways that being a “Jewish guy” has influenced your career?

It’s my Jewish upbringing that made me want to be involved in the labor movement. I still hear the lessons I learned as a young man and as a child going to synagogue and Hebrew school. Bloomfield was a lower-middle class town and I remember my rabbi telling us, “All work is honorable, regardless of whether or not you have a job that requires a college education. All honest work: working with your hands had just as much dignity as working with what you learned in college.”

A Jewish labor leader on his union’s battle with Amazon