For a century, Aunt Jemima products spread a racist archetype — and the Yiddish press helped 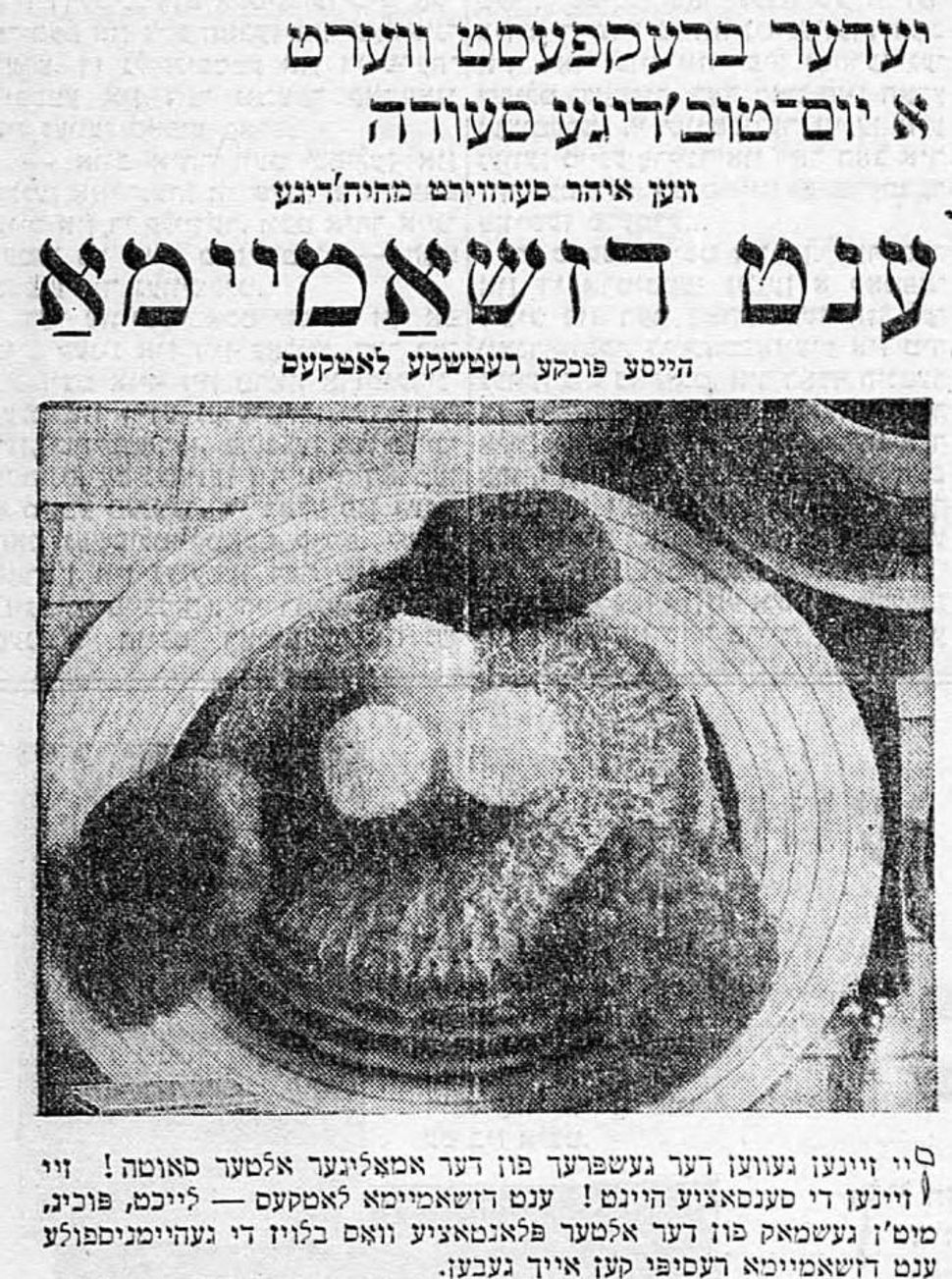 “Every Breakfast will be Yontif’dig Seudah when you serve Aunt Jemima,” reads a 1936 ad. Lower it says “with taste of the old Plantation, that only Aunt Jemima’s secret recipe can give.” Image by Forward Archive

After 131 years, Quaker Oats announced this week that it will replace Aunt Jemima’s familiar name and face on all of its products with the logo for “Pearl Milling Company,” a homage to the St. Louis company which first invented the product.

Aunt Jemima became one of the world’s most prominent racist stereotypes thanks, in part, to the brand’s marketing efforts in U.S media outlets—including the Yiddish press, which published uniquely Yiddish and Jewish ads to market Aunt Jemima products to its audience.

For immigrant Jews arriving at ports in New York or elsewhere in the country, seeing Aunt Jemima’s ads in the pages of the Yiddish press would have been one of their first introductions to America’s racist tropes.

“From slavery through the Jim Crow era, the mammy image served the political, social, and economic interests of mainstream white America,” wrote the Jim Crow Museum of Racist Memorabilia at Ferris State University in a primer on the character. “During slavery, the mammy caricature was posited as proof that Blacks — in this case, Black women — were contented, even happy, as slaves. Her wide grin, hearty laugher, and loyal servitude were offered as evidence of the supposed humanity of the institution of slavery.”

The Pearl Milling Company’s owners lifted the name and character from a minstrel show they saw in 1889 and applied it to their newly invented product.

The image spread via media advertisement through every culture and subculture of America, including among Jewish American immigrants. 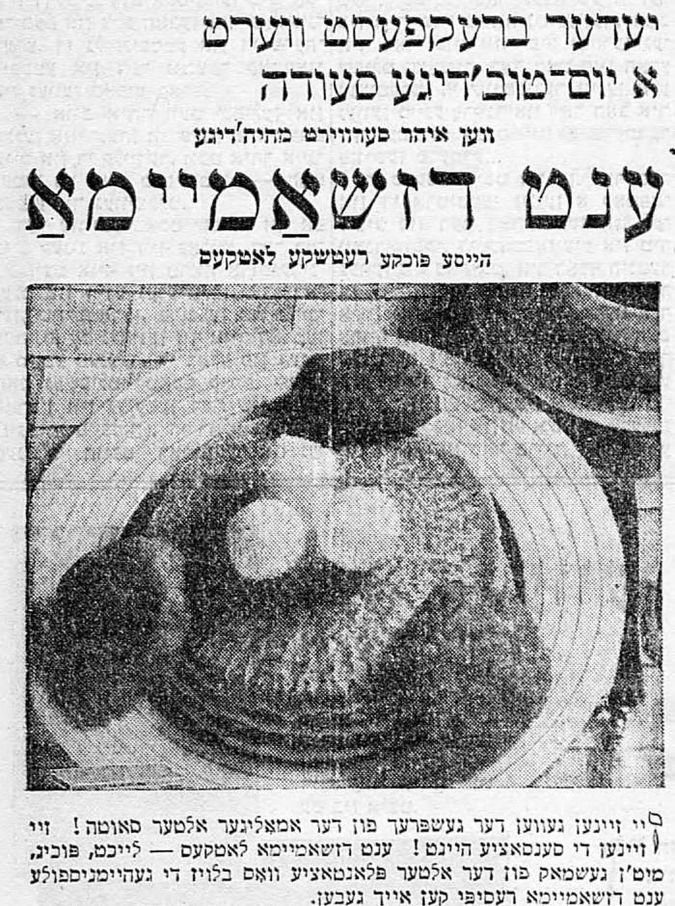 “Every Breakfast will be Yontif’dig Seudah when you serve Aunt Jemima,” reads a 1936 ad. Lower it says “with taste of the old Plantation, that only Aunt Jemima’s secret recipe can give.” Image by Forward Archive

A search through the archives of the Yiddish-language Forverts, the precursor to this publication, found dozens of ads for Aunt Jemima’s products, most with the grotesquely racist imagery that graced Aunt Jemima’s packaging.

The Forverts didn’t just reprint the pictures, it translated them into the right cultural context to be absorbed by their immigrant Jewish audience.

One such ad begins: “Every breakfast will be a Yontif Seudah when you serve Aunt Jemima,” using the traditional Yiddish term for a Jewish holiday feast.

What makes it a feast? Well the text which followed lays it out more clearly,

“mit’n geshmak fun der alter plantatsye” — Meaning: with the taste of the “old plantation.” I.e only that which food cooked by slaves could provide. 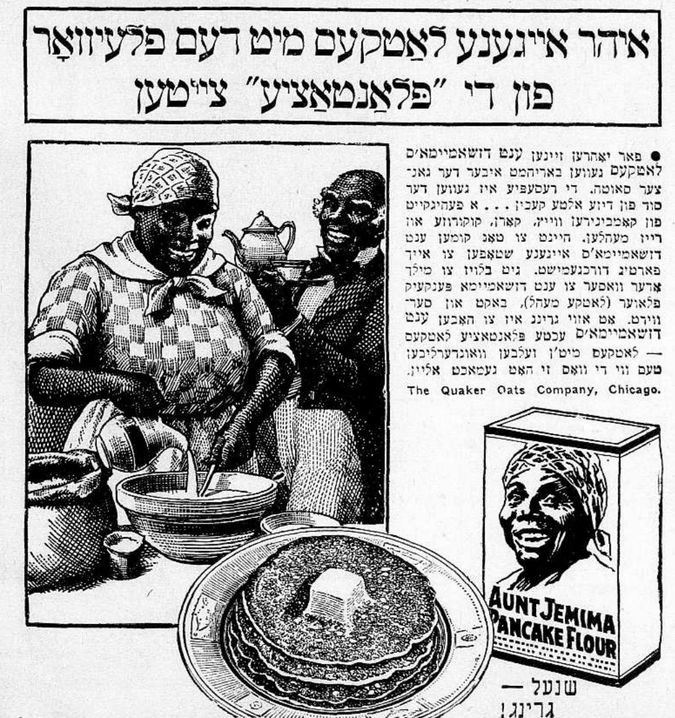 “Her own latkes have the flavor of the ‘plantation’ times,” reads a 1934 ad for Aunt Jemima’s pancake flour. Image by Forverts

Another advert puts it right in the headline, “Her own pancakes have flavor of ‘plantation’ times” it reads in Yiddish, above the image of a smiling Aunt Jemima complete with all the mammy tropes and a so-called “Rastus” character, — the male equivalent of a mammy — standing right behind her. The ad ran right next to an article reporting on a Swiss antisemitism trial centered around the Protocols of the Elders of Zion.

A third, which ran around Hanukkah in 1929, begins, “Hanukkah and Latkes go hand in hand, — but every Jewish balabusta (housewife) must see that they should be made with “Aunt Jemima’s ‘pancake’ flour.” (While the word “latke” here refers to the usual potato-based Hanukkah variety, “latke” was also how most of the other ads translated pancake into Yiddish.) “Hanukkah and latkes, they go hand in hand,” reads a 1929 ad. Image by Forward Archives

Once more it was placed above a picture of the racist mammy trope.

The irony of juxtaposed imagery which glorified the enslavement of African Americans with a holiday which celebrated Jewish liberation, seemed to be lost on the Forverts’s editors.

So too was the irony of the largely left-leaning Forverts printing these ads alongside their reporting that continually covered labor rights, the civil rights movement, and antisemitism.

That isn’t to say that all of the Forverts’s reporting from the time lived up to lofty ideals. In one of the same issues with an Aunt Jemima ad, the Forverts devoted an entire half-page to an article headlined “The family life of the half-wild Arabs.”

“The readers of the Forward know that theirs is a paper which belongs to no individual, which cannot be bought, which is unafraid, and which can afford to be discriminating in the choice of advertisements,” Henri Greenfeld, who was the Forverts’s advertising manager in the 1920s once wrote. “Our agents can proudly point to the fact that no advertiser can buy space in the Forward unless we are persuaded that he is telling the truth.”

Of course, the Forverts was not alone in printing Aunt Jemima ads with racist content. They appeared in other organs of the Yiddish press, and the character of Aunt Jemima even appeared, complete with Black face, in productions of New York’s Yiddish theater scene.

All this was a drop in the water compared to how the figure of the mammy proliferated through wider American media. But the fact that mainstream media was awash in racist stereotypes made it even more important, according to civil rights leaders of the time, that the Forverts avoid them.

At the very same time the Yiddish Aunt Jemima ads were printed, NAACP founder W. E. B. Du Bois, implored the Forverts to use its platform to keep newly-arrived Jewish immigrants free from bigotry.

“When the immigrant from Eastern Europe meets the Negro in New York,” Dr. W. E. B. Du Bois told the Forverts, “he is curious. He has never before seen a colored man; he therefore gazes at him as something new and novel. In his next step, through the process of Americanization, the immigrant will be told to avoid the Negroes, not to have any dealings with them, etc., etc. and later the final step, he will unconsciously begin to absorb the current prejudices against Negroes.”

“But before the immigrant goes any further, he should be stopped and warned. The millions of Negroes in America represent the exploited and persecuted group, just as these wanderers from Russia and Poland and Romania represent that of their countries,” he added.

David Ian Klein covers breaking news and international Jewish communities for the Forward. You can reach him at Klein@forward.com and on Twitter @davidianklein

For a century, Aunt Jemima products spread a racist archetype — and the Yiddish press helped