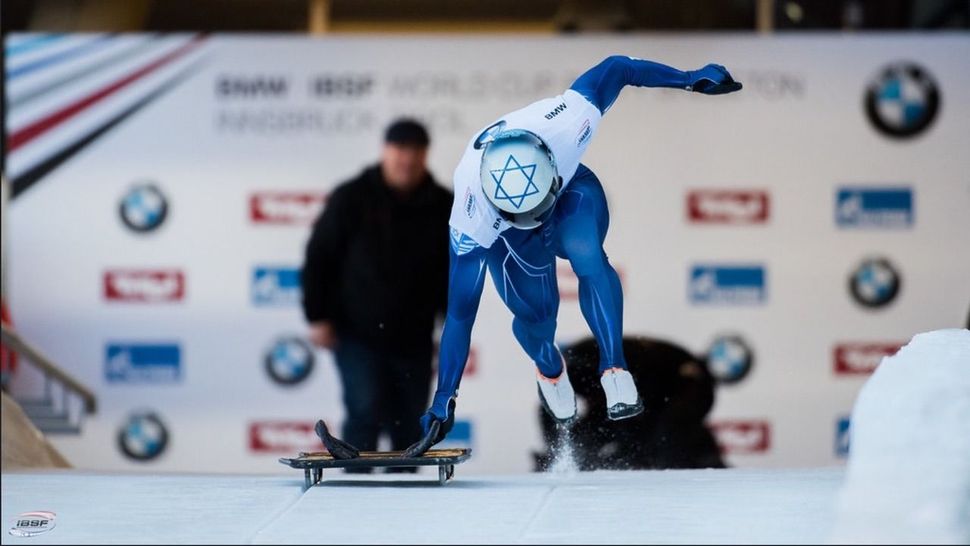 The bobsled/skeleton track in Germany is about 2 ½ miles from Eagle’s Nest, Hitler’s vacation home. When Jared Firestone of Hollywood, Florida, competed on that track last season as a member of the Israeli team, he made sure to wear a helmet he had specially emblazoned with the Star of David.

“It was important for me to have the Jewish star on my helmet where everyone could see it,” he said.

Firestone, 30, made headlines when on Jan. 26 he won a bronze medal in the sport of skeleton at the North American Cup in Park City, Utah — the first time an Israeli has earned a spot on the podium in that sport. 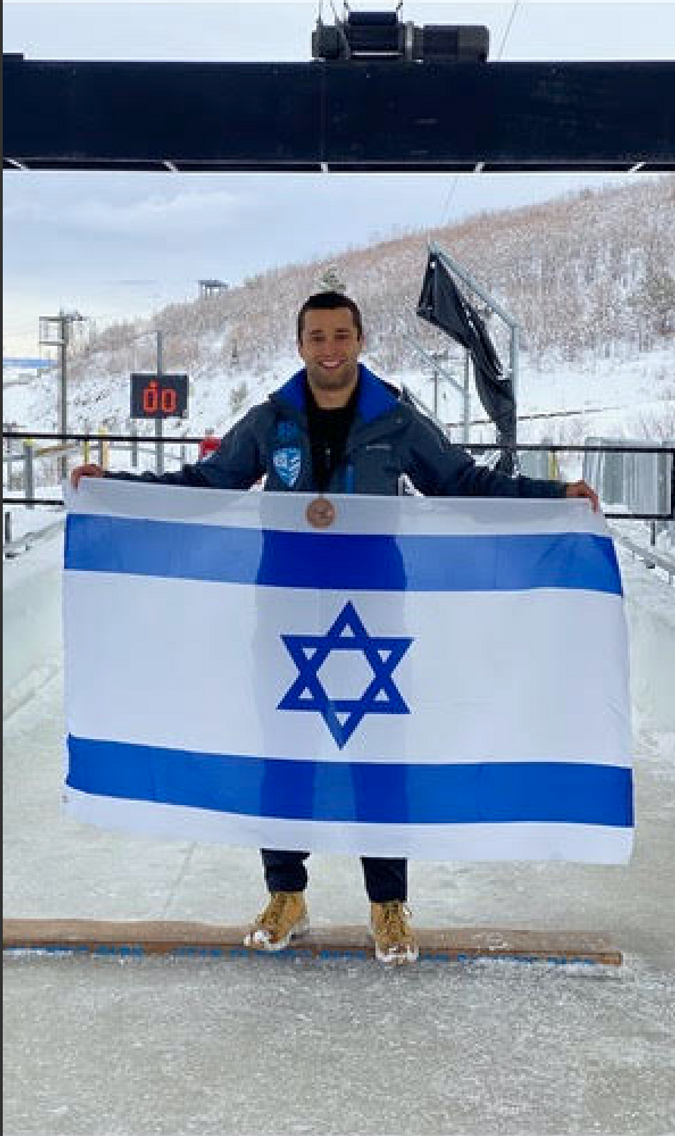 Unlike the bobsled, in which either two or four athletes travel at a speed of 80 miles an hour down a narrow, twisting, banked ice track in a gravity-powered sleigh or open-air carriage with a long seat and steering wheel, the sport of skeleton involves only one athlete hurtling solo face down and headfirst on a small, bony-looking flat sled on the iced track. Firestone completed the mile-long course in 49.66 seconds, traveling at speeds as high as 81.5 miles per hour.

Not only did he earn a Bronze medal and share the podium with athletes from the United States and Italy, he also set a speed record for Israel’s National Team.

But that accomplishment was almost derailed last summer when, following a surgical procedure, complications developed that led to the breakdown of muscle tissue and he found himself in the intensive care unit of Jackson Memorial Hospital in Miami.

“I couldn’t walk in June and July and then I had a month of physical therapy.” It was not until September that he could begin training for the North American Cup.

What motivated him during that tough period, Firestone recalled, was “the thought that one day I was going to be on the podium with the Israeli flag.” 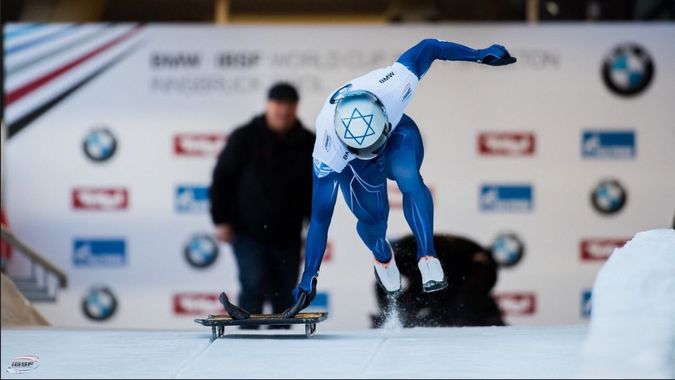 But excelling in the sport of skeleton wasn’t always Firestone’s goal. At Pine Crest School, a private high school student in Fort Lauderdale, he was on the track team, even winning the district championship in 2008 in the 100-meter dash. When he attended Tulane University in New Orleans,, he again joined the track team and dreamed of competing in track and field for Israel in an international competition.

But in his first semester at Benjamin Cardozo School of Law in 2013, Firestone suffered a stroke. While recovering, he watched the 2014 Winter Olympics and — after assurances from doctors that another stroke was unlikely – he decided that the sport of skeleton was a better option for him.

He trained for three seasons with Team USA Skeleton in Lake Placid, N.Y., all the while passing the Florida Bar and Florida Real Estate Sales Associate exams. He is now a practicing attorney with Gustman Law PC.

His parents were not overly thrilled with the sport. But that changed when he applied for Israeli citizenship and formally joined the Israel Bobsled & Skeleton Federation in April 2019.

“When I told them I would be racing for Israel, they became enthusiastic and they now have a lot of pride in what I’m doing,” he said.

Firestone said his decision to become an Israeli citizen was influenced by his participation in the March of the Living in 2008. On that trip, he visited Nazi concentration camps, learned what happened to the Jews of Europe in the Holocaust, and visited Israel.

“I saw that it was so important and crucial to support Israel the best we can,” said Firestone, who had attended a Jewish day school, Scheck Hillel Community School in North Miami Beach, from kindergarten to eighth grade. “I felt I could use my talents on the athletic stage and get to be an ambassador for Israel that way.” 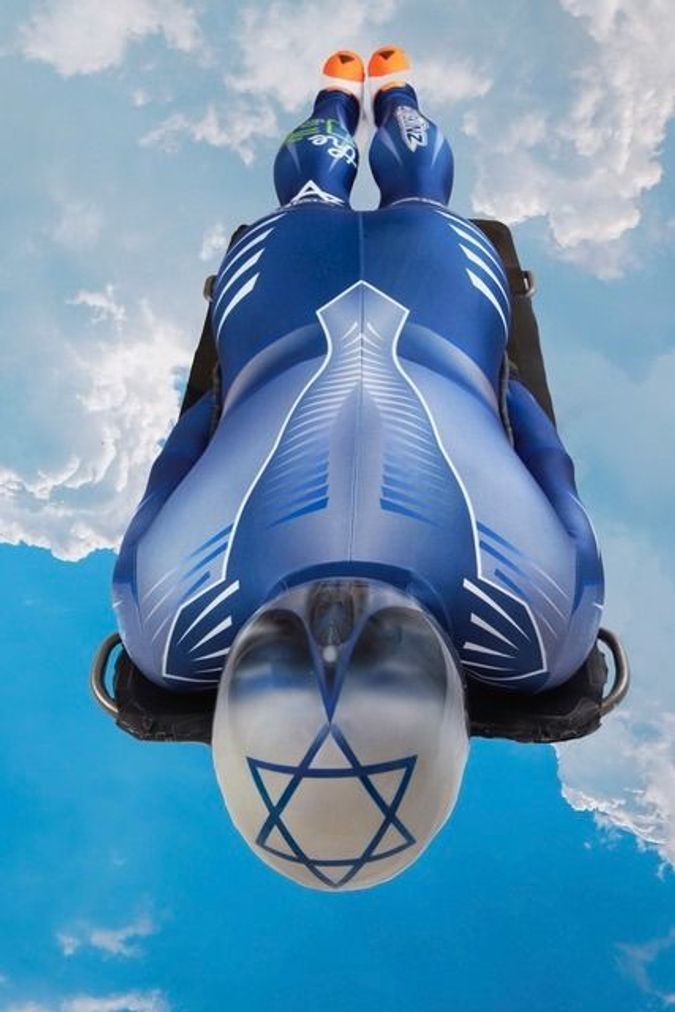 Firestone’s success as an athlete was evidenced even as a child, according to David Fried, his football coach at the Hillel school.

“He excelled athletically and his natural ability is wonderful,” he said. “But his commitment to his craft and his dedication to his sport is what made him excel.”

He added that Firestone’s success in the sport of skeleton is all the more remarkable because “he grew up in south Florida – it’s not like he grew up on the slopes with the skeleton in the backyard.”

“It is a great feeling when you see a kid like that who is so close to his goal in athletics,” he said.

Firestone’s goal is competing for Israel in the Winter Olympics next February in Beijing. His sprint coach and fitness trainer, Chris Brooks of Fort Lauderdale, said he is convinced Firestone can sled faster.

“He was able to push some of his fastest times this season coming off major surgery and having a late start,” he said.

Firestone pointed out that Israel is “not guaranteed a spot” in the sport of skeleton and must earn it. David Greaves, president of Israel’s Bobsled/Skeleton Federation, noted that another Israeli is also competing to be Israel’s representative in the skeleton. But he said Firestone is “different from our current athletes because he was a track and field specialist. He is a 100-meter sprinter and that attribute is critical in our sport. If you are competitive in the push at the beginning, you have a good shot of winning.”

Israel decided to compete in international sports because it afforded “an opportunity to shed a positive light” on the country and to let other athletes “meet an Israeli, and in some cases their first Jewish person. Jared comes from a traditional Jewish family. We have had wonderful followers through his family’s connection to the sport.”

Rabbi Ian Silverman, spiritual leader of the Shul of Harbor Islands in Hollywood, a Chabad congregation, said he has known the Firestone family for years and that the “entire community is proud of the fact that one of our own children has dedicated himself to the sport and is representing Israel.”

Brooks said he did not go to Utah to see Firestone compete last month, but that if he goes to Beijing next year, he will attend.