Purim as a Jewish ‘National Coming Out Day’: What the holiday means for LGBTQ Jews 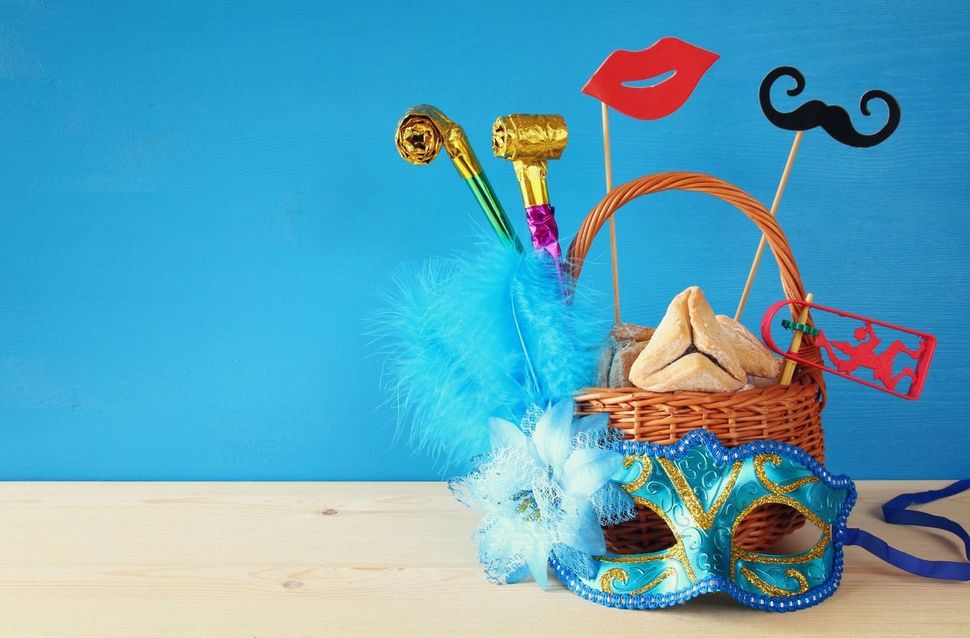 For some, the story of Purim has come to embody the potential of the Jewish canon to uplift and embrace LGBT identities. Courtesy of Tomertu/iStockPhoto

For many Jews, Purim may be the holiday when five-year-olds dress up like Queen Esther and 25-year-olds drink “until they can’t tell the difference between Mordechai and Haman,” but in recent years, the holiday has taken on a new meaning. For some, the story of Purim has come to embody the potential of the Jewish canon to uplift and embrace LGBT identities — and many communities are celebrating it as such.

In an interview, Rabbi Steve Greenberg spoke of Purim as a “Jewish National Coming Out Day.” Jericho Vincent, a rabbinical student who teaches classes in genderqueer Torah, explained that the story of Purim can be read as being “about passing, about allyship, about coming out of the closet.”

“Everyone in the story, other than Vashti, is in drag,” said Greenberg, the founding director at Eshel, a support and advocacy organization for LGBTQ Orthodox Jews. “Everyone’s in the ‘closet,’ and at some point comes out.” Esther is able to “pass” as a Shushanite, and “keep her information private but also make sure that [she and Mordechai are] able to maintain their relationship,” Vincent, a former Pforzheimer Fellow at Harvard, said. Eventually, however, Esther is forced to “come out” to save her people.

In Vincent’s view, there’s an important message for LGBTQ Jews buried in that narrative.

“You have to look out for your safety. Obviously you can’t come out until it’s safe for you to come out,” they said, “but when you do come out and you do become a visible queer person, there’s an opportunity to be a good ally to other queer people — even a responsibility, maybe.”

And looking beyond what queer Jews may glean from the story of Purim, some argue there’s a responsibility for all Jews to approach the holiday from the lens of acceptance.

“I would actually argue that not only is Purim a day that is conducive to the celebration and affirmation of LGBTQ identity, I would argue that is an integral part of Purim,” said Jaimie Krass, the national director of youth programs at Keshet, a nonprofit dedicated to LGBTQ equality in Jewish life. “That’s what it means to do Purim right.”

Rabbi Amichai Lau-Lavie, the senior rabbi at Lab/Shul, has been “doing Purim right” — by Krass’s definition — for more than two decades. Lau-Lavie is known for his drag alter-ego Rebbetzin Hadassah Gross and, even though his congregation is now on Zoom, this year will be no different. 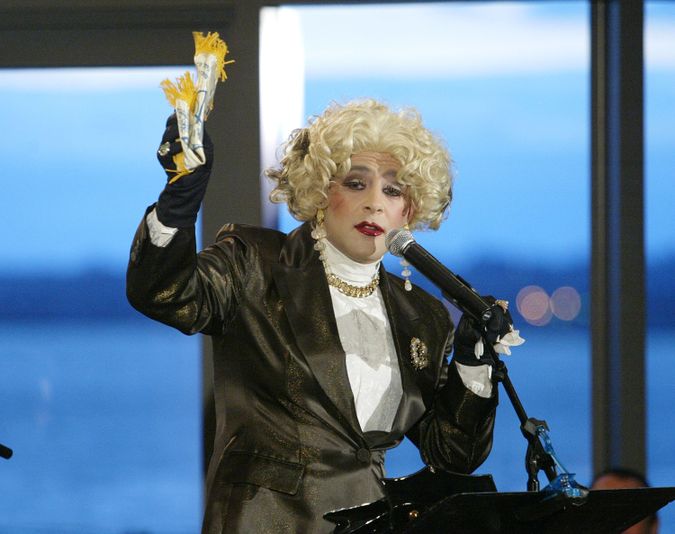 Rabbi Amichai Lau-Lavie, in drag as ‘Rebbetzin Hadassah Gross,’ in 2004 at the Museum of Jewish Heritage. Photo by Peter Kramer/Getty Images

“Purim is a very political holiday,” Lau-Lavie said. He recalled living in Israel in 1994 when Baruch Goldstein, a religious extremist, cited the Scroll of Esther and its “story of revenge” as inspiration while committing mass murder on Muslim worshippers. “That was one of the first times I understood that we need to reclaim Purim, not just as ‘putting on masks and having a good time,’ but to look at the shadow. What is our shadow? And how do we fix the shadow?”

In focusing on doing that work, Lau-Lavie turned to drag as a way to “queer” the holiday, or “just another way to look at things from another perspective.”

“So that we can do what court jesters have been doing for millennia, which is to tell the truth through the mask of art, or myth, or drag,” he explained. 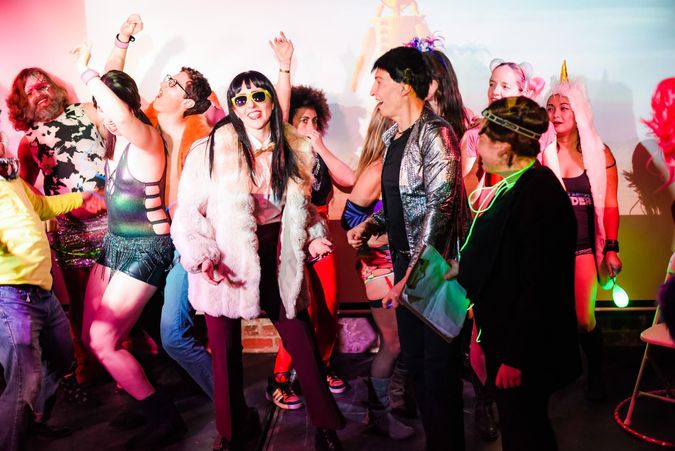 In 2018, Keshet celebrated Purim with a ‘Gendershmear Party.’ Courtesy of Keshet: LGBTQ inclusion in the Jewish Community

Beyond the “coming out” tales within Purim’s story, the traditions surrounding it, some argue, uniquely embrace LGBTQ members of the Jewish community. According to Vincent, there are “transgressive themes built into the holiday,” whether it’s binge drinking, partaking in extravagant festivals, donning costumes with gender-play, or reviving the name of an enemy (Amalek) only to swear to blot it out from history.

“I read that as Jewish tradition recognizing that sometimes society’s norms need to be played with, and violated, and cracked open,” they added. “Purim really queers our understanding of what Torah is and what tradition is asking of us.”

Above all, Purim is an opportunity for many Jews who frequently feel excluded to see their own stories and identities reflected in a central Jewish text.

“One theme that queer folks like myself see within Purim and see within themselves is that sort of unmasking and masking component… the sharing of one’s true self with others and oneself, which is something that Esther does, when she essentially ‘comes out’ as Jewish,” Krass said.

Purim as a Jewish ‘National Coming Out Day’: What the holiday means for LGBTQ Jews