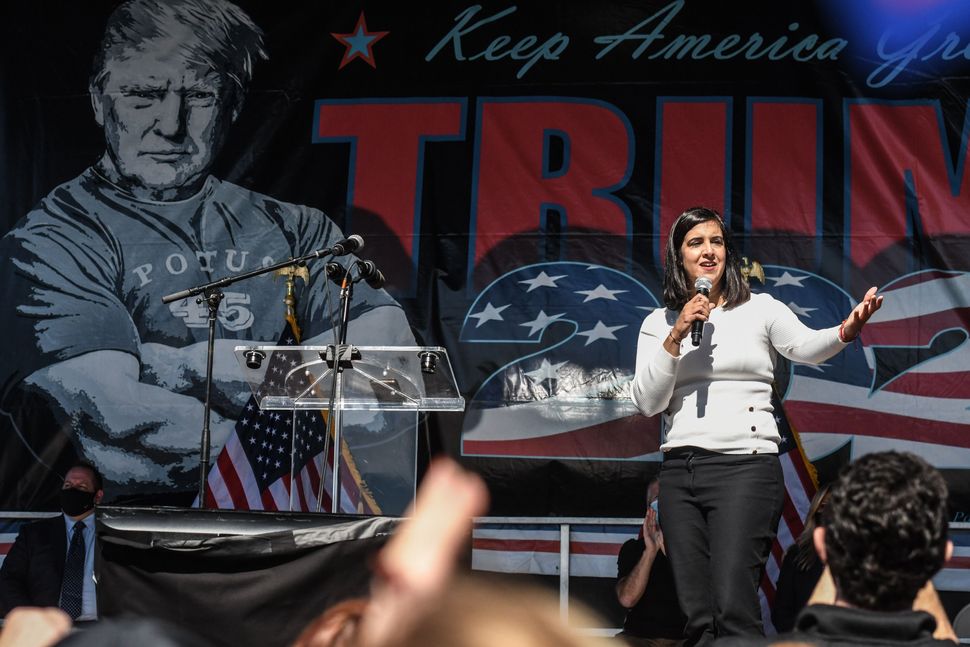 During her run for Congress last year, Nicole Malliotakis repeatedly accused her opponent, first-term Rep. Max Rose, of voting with House Speaker Nancy Pelosi and the Democratic caucus “95 percent of the time.”

Now, a little over a month into her term, Malliotakis, a Republican from Staten Island, wants everyone to know that she cast a crucial vote breaking with her party’s leadership.

Malliotakis was one of 11 House Republicans who voted on Feb. 4 to strip Rep. Marjorie Taylor Greene of her House committee assignments because of her embrace of the QAnon conspiracy theories and incendiary comments including some that were antisemitic.

“It’s never easy to vote against some of your own party,” Malliotiakis said in a recent phone interview. “But I feel strongly that this was a vote that the majority of my constituents wanted me to take.”

Malliotakis, the only Republican member of Congress in New York city, noted that Greene’s comments questioning whether a plane really flew into the Pentagon on Sept. 11, 2001 was deeply offensive, especially to a community that lost the most people in those terror attacks. “For me it was a vote about conscience and making sure that my constituents were represented,” she said.

“If we’re going to take back the House in 2022, we can’t have individuals viewing that type of rhetoric,” Malliotakis added. “Hopefully this was an isolated circumstance.”

The freshman congresswoman maintained that this vote was “consistent” with calls for Democratic House leaders to treat members of their caucus “with the same scrutiny.” In December, House Republicans sent a letter to Pelosi asking her to remove Rep. Eric Swalwell from the House Intelligence Committee following a report that he was targeted by Chinese spies. Malliotakis has also said that Rep. Ilhan Omar should be booted from the House Foreign Affairs Committee for remarks that Omar, who is from Minnesota, made about U.S involvement in Venezuela, and for suggesting AIPAC was paying politicians to support Israel.

“There’s no doubt that there’s a double standard,” Malliotakis said.

Balancing partisanship and independence is a particular challenge in Malliotakis’s district, which includes all of Staten Island and a swath of Brooklyn, and is considered the most conservative in heavily Democratic New York City. Trump won the district twice by a 10-point margin, though the Cook Political Report considered it a “toss-up.” It remains a swing district that both national parties will be targeting again in 2022. An estimated 18% of the district population is Jewish, according to 2010 census data.

Rose’s 2018 ouster of the Republican incumbent, Dan Donovan, was a surprise: he won by six percentage points, becoming the first Democrat to represent the district since 2011.

A moderate, Rose occasionally broke with his party on important votes. voted against Pelosi for Speaker in early 2019, and supported Trump’s executive order to combat antisemitism on campus later that year. He also lauded the targeted killing of Qassim Soleimani, the commander of Iran’s elite Quds Force, and was one of eight Democrats to oppose a measure aimed at limiting the president’s war powers.

But Rose’s vote to impeach Trump — the first time — helped swing the district away from him in his re-election bid.

In the 30-minute interview, Malliotakis said that, with the Greene controversy and Trump’s impeachment behind them, she hopes Republicans will unite to oppose the Biden administration’s policies. “We can’t allow this to distract and take away from our focus, which needs to be stopping some of these dangerous policies the administration and the Democrats are trying to pursue,” she said, mentioning trade with China and immigration. “That needs to be our sole focus.”

At the same time, she said the prime focus should be working across partisan lines on COVID relief, accelerating vaccination distribution, and rebuilding the economy. Malliotakis is the only freshman House member to serve on the House Select Subcommittee on the Coronavirus Crisis.

“I think I’ve come into Congress with the commitment that I want to try to find common ground and work with anyone and everyone who shares the same goals as I do,” she said. “But I’m also going into this with open eyes — with an understanding that there are going to be many times where I’m not going to see eye to eye with the Democrats and where we should be taking this nation.”

Malliotakis was recently assigned to serve on the House Foreign Affairs Committee and the Transportation and Infrastructure Committee. She is also a member of the Hellenic Israel Alliance caucus, a bipartisan group promoting democracy and human rights in Southern Europe and the Eastern Mediterranean.

Since the foreign affairs panel hasn’t formally held in-person hearings, Malliotakis said she has yet to run into Omar, whom she still believes doesn’t deserve a seat on the committee.

Malliotakis said she intends to push the Biden administration “to build on the successes of the Trump administration, particularly on the Abraham Accords.” She recently signed onto a GOP letter to Biden urging him not to re-enter the 2015 nuclear deal with Iran. “Trump has isolated Iran n a way where we may have leverage in being able to try to negotiate a better deal,” she said.

She has already come under fire at home for her strong support of Trump as he was contesting the November election results, even after the Jan. 6 insurrection of the Capitol. City politicians joined hundreds of protesters at a Jan. 9 rally in front of her district office in Staten Island calling for her resignation.

In the interview, Malliotakis suggested the protesters were supporters of Rose who already wanted to see her ousted in the next election, and just seized on the Jan. 6 issue.

“I’m voting differently because I received the mandate from the voters who rejected Max, and now his supporters are going to protest me for it,” she said. “But they shouldn’t be surprised that I’m voting differently because these are the policies I ran on. I ran supporting President Trump, I ran on supporting our police and fully funding our police departments. This is their attempt to warm up the 2022 election.”

Malliotakis also dismissed rumors that she had convinced Trump not to pardon former State Assembly Speaker Sheldon Silver, who is serving a six-and-a-half year sentence on corruption charges. Malliotakis had fiercely opposed Silver, a Democrat, during her 10 years serving as a state legislator.

After news reports made clear the president was considering pardoning Silver, rumors riled the Orthodox community that Malliotakis used her relationship with Trump to foil the request. “I’ve been very clear in the past about my view of Sheldon Silver,” she said. “He ripped off the taxpayers and was appropriately convicted. But I did not weigh in one way or the other as it related to this.”