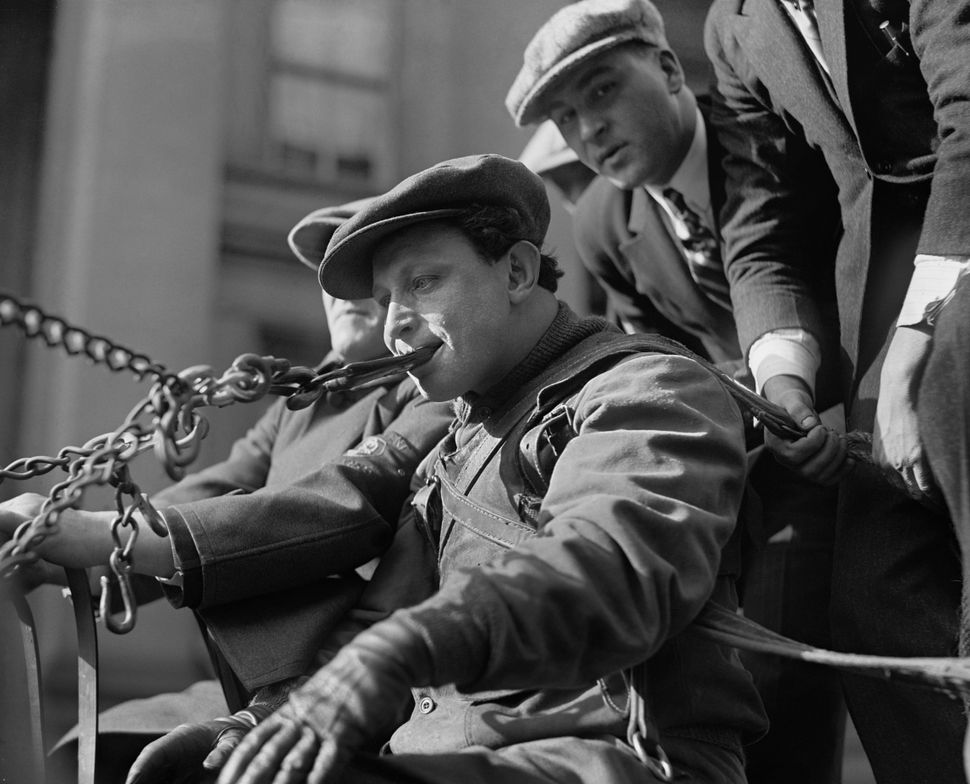 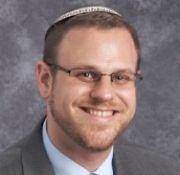 (JTA) — With “Superman and Lois,” the newest TV series involving the character, premiering last week on the CW network, it’s a good time to recall that Superman was the 1938 brainchild of Jewish creators Jerry Siegel and Joe Shuster. Many have suggested that the pair were inspired by their own Jewish backgrounds to create Superman as the paradigm of a hero who defended vulnerable populations from their enemies.

But there is reason to suspect that a more specific encounter may have inspired them to craft the Superman persona.

The years 1923 and 1924 saw a phenomenon in the United States: tours by Siegmund Breitbart, known as “The Jewish Superman,” across North America. Breitbart performed in Cleveland and Toronto, Siegel and Schuster’s respective hometowns.

While it is nearly impossible to prove — there are no records of Siegel or Shuster mentioning Breitbart — there is reason to surmise that the strongman may have served as something of an inspiration. He wore a cape and was advertised as capable of stopping speeding locomotives.

Who was this man Breitbart, lauded during his lifetime as the strongest man in the world, The Iron King, Jewish Hercules and a modern-day Samson?

Siegmund “Zishe” Breitbart was born to a family of locksmiths in Lodz (now Poland, then Russia) in 1893. In his autobiography, he reports that his family discovered his unusual strength when, at age 3, he extricated himself from beneath an iron bar that had fallen on him in his father’s store. By 4 he was casting iron in his family shop.

His early years were difficult. Expelled from a number of religious schools for using force against fellow students, Breitbart was captured by the Germans while serving in the Russian army during World War I. After the war he remained in Germany, subsisting on the money he earned by performing feats of strength at local markets.

It was at one such 1919 performance that the German Circus Busch, famed for featuring Harry Houdini and other top performers, spotted Breitbart and brought him on board to perform its opening act.

Breitbart’s strongman routine, which had him dressed in hypermasculine costumes such as a Roman centurion, skyrocketed in popularity, and he quickly was moved from sideshow to main event. Notwithstanding the fast-rising tide of anti-Semitism in Germany and Austria, Breitbart, who often wore the Star of David while entering the circus ring, achieved a mass Jewish and non-Jewish following in Berlin, Vienna, Prague and Warsaw.

Breitbart’s act was based on his early experience working with iron. He bent rods into horseshoes, bit through chains and pounded nails into boards with his fist. He could draw chariots with his teeth. And his image undercut racial stereotypes about Jews. As musclemen were seen as representing the proud, strong German male throughout the opening decades of the 20th century, Breitbart was in effect also embodying quintessential images of German masculinity.

As Breitbart’s legend grew, he increasingly became the talk of each town in which he performed. One reporter noted that “Not only do gymnasia students and high school girls talk about him; even first graders know how strong Breitbart is.”

A tavern proprietor complained, “My tables are studded with holes because my customers test their strength by hammering nails into them with their open hands. All Viennese women are in love with this new Samson. Racial hatred, pride or prudishness — all of it is useless here.”

Capitalizing on his popularity in Europe, Breitbart spent much of 1923 touring the United States. Ultimately the Breitbart craze resulted in product endorsements, a starring role in the 1923 film “The Iron King” and a Breitbart physical health correspondence course in which subscribers received guides detailing Breitbart’s muscle-building and nutritional eating routines.

Breitbart’s career came to an abrupt end in 1925 when a stage accident involving a rusty nail led to a fatal case of blood poisoning. He was buried in Berlin.

Unfortunately, the Nazi destruction of Polish Jewry largely extinguished the rich oral legends that perpetuated Breitbart’s memory. But his legend has not fully disappeared. A 2001 movie, “Invincible,” featured a fictional account of his life. A children’s book titled “Zishe the Strongman” appeared in 2010.

What do we make of this seeming paradox: a Jewish superhero who at a time of rising anti-Semitism, and during an era when Jewish men were derided as sissies, became a folk hero of able-bodied masculinity?

Some saw Breitbart as a sort of vindication of the then-German and Austrian embrace of male bravado. In this view, that he was also Jewish rendered him something of a freak to the average German, making him all the more compelling as entertainment on the vaudeville circuit.

Others saw Breitbart as a model for the new Zionist Muscular Judaism. A popular Yiddish saying went, “If a thousand Breitbarts were to arise among the Jews, the Jewish people would cease being persecuted.” Breitbart himself was a proud Jew and often performed while flanked by the Zionist flag. He refused to return to a Warsaw restaurant that declined to play “Hatikvah” to greet him. He supported Zeev Jabotinsky’s idea of a Jewish army. Legend has it that Jabotinsky and Breitbart hatched a plan in which Breitbart would become the general of a one-day Jewish army in Palestine.

But neither of these fully captures the story of Breitbart, who was more than just a proud Jewish strongman. He highly esteemed rabbis and Jewish intellectuals, and according to one report, he amassed a substantial personal library that contained 2,000 books on Roman history. He performed for a group of Yiddish thinkers and wrote a personal letter of support on their behalf. He met and performed personally on behalf of the Radzhiner Hasidic rebbe and donated 30 pounds of Passover flour to the rebbe’s followers following the meeting.

Even more remarkable, “Zishe” (literally sweet) was eulogized by numerous individuals as exceptionally sweet, highly emotional and filled with “edelkeit” (Yiddish for a sweet, caring person). One reporter who met with Breitbart expected a tough guy. Instead, he subsequently characterized The Iron King as “the embodiment of edelkeit.”

Similarly, the chief rabbi of the Orthodox Jewish Community (Adass Yisroel) in Berlin, Dr. Esra Monk, saw Breitbart as a “modern Samson the hero” who also possessed a tender demeanor.

“It is greatly symbolic,” Monk declared in his 1925 eulogy, “that for a man who broke chains, it was enough for one person’s good word to render his heart soft as butter.”

Like Clark Kent, Breitbart’s persona was far richer and more well-rounded than his stage persona allowed. He was a mixture of elements — brains, brawn, a gentle nature and fierce Jewish pride. And he’s still inspiring nearly 100 years after his untimely death.