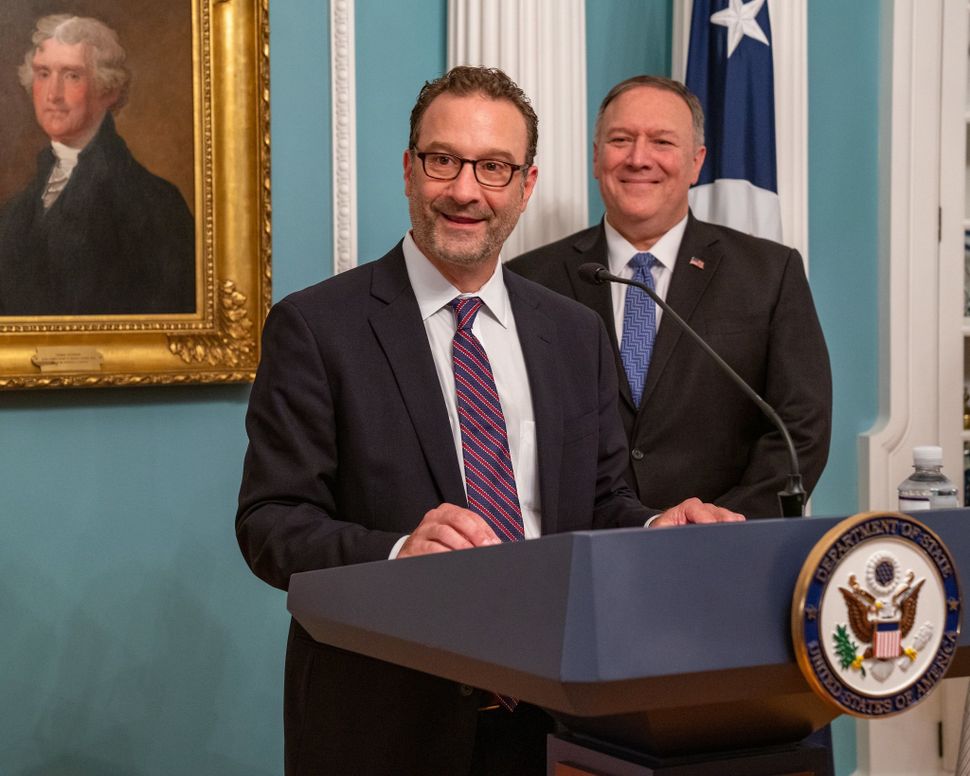 David Schenker, who spent 19 months as an assistant secretary of state in the Trump administration, said in a recent interview that he is “very happy to be sleeping at night again.”

“I didn’t sleep well — it was really a lot of responsibility and I was incredibly concerned with the well-being and safety of American personnel abroad,” Schenker explained. “Now, I think about it all the time, but I can’t do anything about it. So my sleep has definitely improved.”

Schenker, 53, was the assistant for Near Eastern Affairs — the top American diplomat focused on the Middle East — from June 2019 until the end of the Trump presidency. He has since returned to the Washington Institute for Near East Policy, a think tank where he had served as a director of the program on Arab politics for 13 years.

Though he was considered an ally of former Secretary of State Mike Pompeo, Schenker differed from his boss by remaining an outspoken advocate of the two-state solution. In a 30-minute telephone interview, Schenker also made clear that he “had no question about the legitimacy of our elections” and described the Jan. 6 insurrection at the Capitol by Trump supporters as “an atrocious act.”

Schenker, who was also a top policy adviser to Secretary of Defense Donald Rumsfeld in the early 2000s, traveled to Israel with Pompeo last May to discuss Prime Minister Benjamin Netanyahu’s initial plan to annex parts of the occupied West Bank. Following the Israel trip, Schenker expressed hope that Israel would take into account the possible reaction of Arab Gulf states to the move.

Israel eventually dropped its annexation plan as part of the normalization deal the Trump Administration helped broker with the United Arab Emirates, known as the Abraham Accords.

Schenker said that negotiations with the Emirates were managed by the White House, so he was not involved. But he said that the Emirates had indicated readiness to expand relations with Israel even before President Trump unveiled his Mideast peace plan in January 2019, and, as he put it, “saw an opportunity with the Israeli hesitancy to move forward on annexation” to lock in a deal. The upcoming U.S. presidential election, he added, made it easier for Israel to postpone annexation.

Schenker, unsurprisingly, said that the Trump administration’s foreign policy was a success, especially in the Middle East, which he described as “a region that has great challenges.” Besides the four deals Israel has so far signed with the UAE, Bahrain, Morocco and Sudan, he said successes include the lack of U.S. military action in the region and the pressure campaign on Iran.

On Iran, Schenker said that it’s no surprise that the Biden team is attempting to resume direct talks with Iran to re-enter the 2015 nuclear deal, formally called the Joint Comprehensive Plan of Action, or JCPOA. But Schenker suggested that America’s regional partners “are quite concerned that a return to the JCPOA without significant modifications to what they see as a very flawed agreement would be problematic.”

President Biden has yet to appoint a replacement for Schenker. Candidates on the short list include Dan Shapiro, President Obama’s Ambassador to Israel; and Barbara Leaf, a former fellow at the Washington Institute and former U.S. ambassador to the U.A.E. Though Leaf was tapped in January to serve as senior director for the Middle East on Biden’s National Security Council, Axios reported last week that Leaf was likely to be shifted over to the State Department.

Whoever gets the job, Schenker advised, would do well to take a broad view of the role, which covers a large, complicated and volatile region. “It’s very easy to get caught up in the crisis of the day,” he noted, “but it’s important to pay attention to our alliances and to the states that are not failing.”

Schenker called Hady Amr — a former colleague at the Washington Institute who Biden named as deputy assistant of secretary for Israeli-Palestinian affairs — an “incredibly capable individual.”

This appointment, he said, indicates that the administration’s approach to the Israeli-Palestinian conflict would not be investing time and energy into resuming peace talks. Instead, he believes the new administration’s short term focus is “to reestablish ties with the Palestinian Authority and working on ways to improve the lives of Palestinians.”