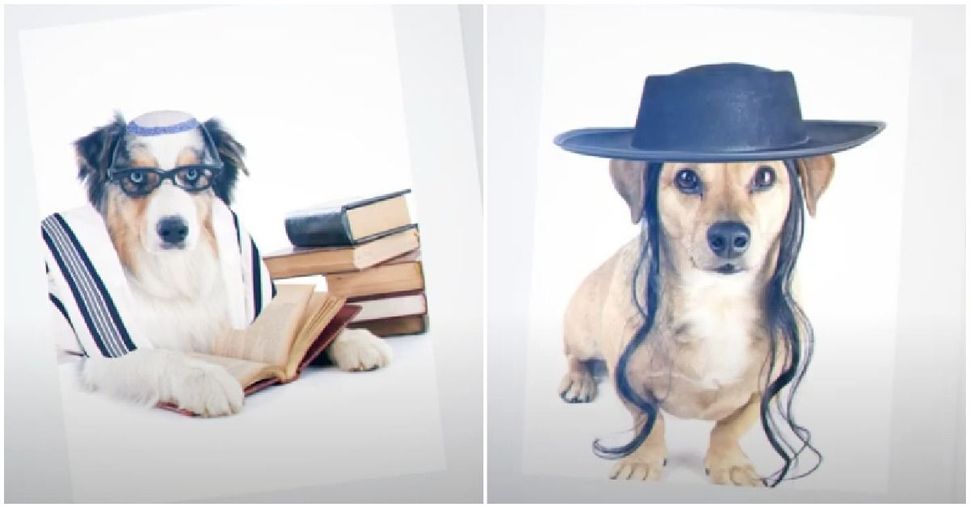 Dogs celebrating ‘Bark Mitzvahs’ were used as stand-ins for non-observant Jews in a political ad. Courtesy of YouTube Screenshot

The video, circulated on Wednesday by the ultra-Orthodox United Torah Judaism party, depicted dogs wearing ritual items like kippot, tallit, and tefillin, along with sidelocks and glasses. In an accompanying post on social media, the party asserted: “When the question of ‘Who is a Jew’ is put in the hands of the High Court, this is the result.”

The “grandmother” reference in the video is designed to evoke outrage at the concept of female rabbis. The narrator ends the clip by declaring that “only United Torah Judaism will protect your Judaism, your children’s Judaism, and your grandchildren’s Judaism!” 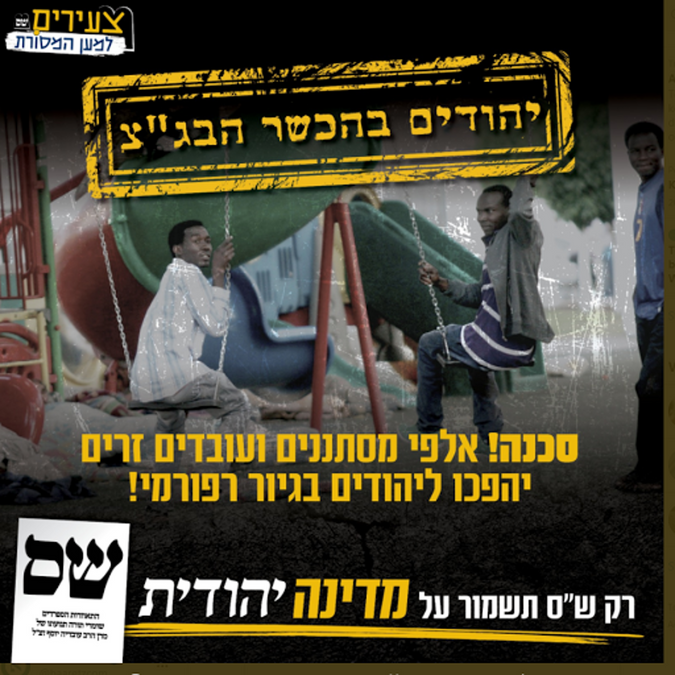 ‘Danger! Thousands of infiltrators and foreign workers will become Jews through Reform conversion,’ reads the poster by the Shas party.

The campaign ads were posted in the aftermath of Monday’s ruling by Israel’s High Court, which ordered the state to recognize Reform and Conservative conversions to Judaism performed in Israel for the purpose of obtaining Israeli citizenship under the Law of Return, angering ultra-Orthodox rabbis and the community’s political leadership.

Netanyahu’s Likud Party has yet to comment on the ads, however, its reaction to the ruling was sympathetic to the ultra-Orthodox outrage.

The party’s response, retweeted by Netanyahu, declared that “The High Court has passed a resolution that endangers the Law of Return, which is a fundamental pillar of Israel as a Jewish and democratic state. Only a vote for the Likud will ensure a stable right-wing government that restores sovereignty to the people and the Knesset.”

“My father once told me that on the parliament building in Budapest there was a sign saying “No entry for Jews and dogs”. Antisemites throughout the generations compared between Jews and dogs, now United Torah Judaism have joined them. It’s disgusting.” https://t.co/r5PlEMbZ2H

The dog images in the United Torah Judaism ad were introduced with a clip of a family in the United States celebrating a “Bark Mitzvah,” a humorous party trend among U.S. Jews dating as far back as 1958. The “Bark Mitzvah” trend is frowned on by Orthodox rabbis in the U.S. as being disrespectful to religion. In Israel, it has long been used by ultra-Orthodox parties to denigrate the Reform movement as twisting Jewish traditions – even though the parties have no association with any stream of Judaism.

Opposition leader Yair Lapid, head of the Yesh Atid Party, expressed outrage at the United Torah Judaism ad. Lapid tweeted: “My father once told me that on the parliament building in Budapest there was a sign saying ‘No entry for Jews and dogs’. Antisemites throughout the generations compared between Jews and dogs, now United Torah Judaism have joined them. It’s disgusting.”

The Israeli chapter of the Anti-Defamation League denounced the United Torah Judaism video as “shocking and offensive.”

“The way to resolve such disputes is not through baseless hatred and the dehumanization of millions of Jews. It is sad to see that a party that protests insults when they are directed at the ultra-Orthodox behaves in the same way. It’s time to realize that there is more than one way to be Jewish and that millions of Jews cannot be prevented from choosing the way in which they express their Judaism.”

Along with the dog video, hackles were raised by remarks from United Torah Judaism lawmaker Yitzhak Pindrus, who said on a panel that a young woman with a non-Jewish mother and Jewish father who had converted in a program run by the Israel Defense Forces’ Nativ program, was not Jewish.

Repeatedly referring to the woman as a “goy” and a “shiksa,” he said he would not be pressured into recognizing such a conversion in order to be “pluralistic and polite.”

If a Jewish man were to marry her, he said, the man’s father should “sit shiva” and “say kaddish,” mourning his son as if he had died.

After Pindrus was roundly condemned for his remarks, even by supposed allies such as Bennett, who called his words “shameful,” the Knesset member apologized for using the word “shiksa” but stood by his position refusing to recognize the IDF-sponsored conversion program.

Lapid once again went on the attack, tweeting that the young female convert was, in his eyes “much more Jewish” than the politician who had insulted her.