Jews helped get kids out of Trump’s ‘cages’. Now they face a reckoning. 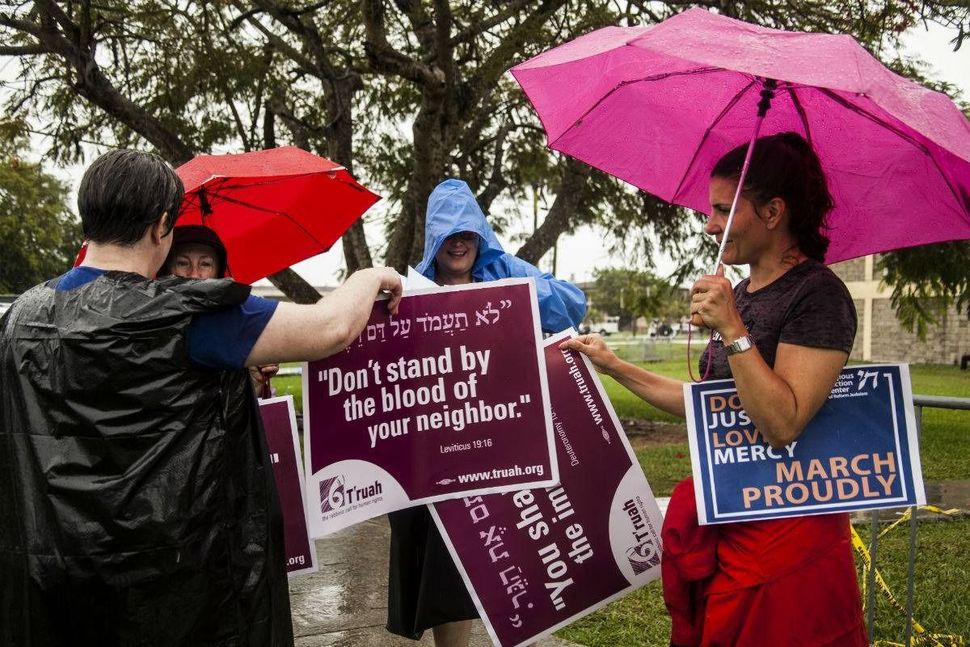 Protesters gather outside Homestead child detention center near Miami in June 2019. Courtesy of The Religious Action Center of Reform Judaism

“Kids in cages” is, among many other things, a brilliant political turn of phrase. It became shorthand for the alleged abuses of the Trump administration and an easy retort from liberals to anyone who waffled on whether to support Joe Biden in the 2020 election.

While the separation of children from their parents at the southern border to deter further arrivals was just one of more than 400 immigration policy changes undertaken by President Donald Trump, it drew by far the most attention and attracted scores of American Jews to become newly engaged in immigration activism.

“People protest what they can see.”

“The image of families being separated hits very close to home,” said Rabbi Jill Jacobs, director of T’ruah, a social justice group for Jewish clergy. “People protest what they can see.”

On my first day at the Religious Action Center of Reform Judaism, where I worked until last June, I met with another recent hire charged with leading the Reform movement’s immigration advocacy. I was tasked with creating a communications strategy for the RAC’s campaign targeting the Homestead Temporary Shelter for Unaccompanied Children.

It was an easy assignment largely because it fit Jacobs’ dictum: Homestead, a for-profit detention center in suburban Miami that held over 14,000 migrant teenagers between 2018 and 2019, was a tangible embodiment of the Trump administration’s crackdown on immigration.

The RAC joined with a coalition of other Jewish groups to protest outside the facility and encourage Reform Jews around the country to sign petitions calling for its closure. When a cohort of Democratic presidential candidates – including Kamala Harris and Pete Buttigieg – visited the facility in June of 2019, Jewish activists waved the RAC’s signs in the background of their press conference. 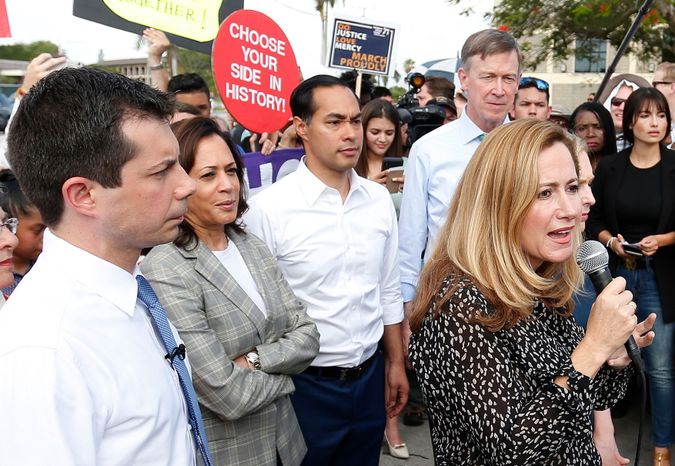 A sign from the Religious Action Center of Reform Judaism is visible in the background of a press conference held by Democratic presidential candidates outside Homestead child detention center near Miami in June 2019. Photo by Getty Images

The national attention was spurred by local synagogues, including Temple Beth Sholom in Miami Beach, where religious school students had written letters to their peers inside Homestead.

“They were letters around hope and encouraging them to stay strong, really just heartbreaking beautiful letters, said Rabbi Ethan Bair, a spiritual leader at the synagogue.

The rallies and letters by the Jewish groups worked. The federal government shut down the facility in August 2019, a rare win for immigration activists during a time when their criticism was largely ignored by those in power.

“The shutdown of Homestead shows our goals are achievable,” Rabbi Jonah Pesner, the RAC’s director, wrote in a letter celebrating the closure.

The symbolism of Homestead’s closure for Jewish social justice organizations that dedicated themselves to immigrant rights during the last four years made the question over what to do with last week’s news that the Biden administration plans to reopen the facility all the more difficult.

“We have definite concerns about the reopening of Homestead,” Barb Weinstein, the RAC’s associate director, told me in an interview. “The new administration needs to address immigration policy starting from the welfare of children and go from there.”

While many groups have issued statements criticizing the reopening, the question of whether the RAC and others that assailed Homestead under Trump will go to the mat to shut it down under Biden is a complicated one.

“We know kids won’t be in cages under the Biden administration.”

Biden’s move to temporarily halt most deportations, which was blocked by a federal judge, and his appointment of Department of Homeland Security Secretary Alejandro Mayorkas, the son of Jewish refugees, may be helping to blunt criticism of his decision to restart mass child detention. Melanie Nezer, senior vice president for public affairs at HIAS, the Jewish refugee resettlement organization, said the news needs to be understood within the context of a new administration.

“The message was, ‘We don’t want kids in cages’ under Trump. We know kids won’t be in cages under the Biden administration,” Nezer said. “But there are circumstances where they need to be housed.”

She said that under Biden, Homestead would only provide shelter to unaccompanied minors arriving at the southern border who could not be immediately matched with family members in the country, as opposed to holding children who arrived at the border with their family members.

The belief that the Biden administration is operating in good faith, and may be amenable to the demands of immigration advocates, may account for a change in rhetoric from 2019 when HIAS shared a link to a video about Homestead on Twitter and wrote bluntly: “Children belong in schools+homes, not in prisons.”

This weekend faith leaders, immigrants+allies marched on #Homestead Detention Center to demand the release of migrant children.
Children belong in schools+homes, not in prisons.
Watch the footage: https://t.co/TIWJ76M9PN#EndChildDetention #FamiliesBelongTogether

At the time, HIAS had shifted away from its D.C. lobbying and toward the courts and grassroots campaigns to generate public pressure on the administration.

“Now there’s more focus again on Washington because there is actually some impact we can have and an administration and Congress we can work with,” Nezer said.

There may also be a desire by Jewish social justice groups to hold their fire until it’s absolutely necessary, recognizing that it might be more difficult to mobilize their bases under a president who avoids the kind of inflammatory rhetoric that drove many to take action under Trump.

“The Trump administration was on just a different level in terms of human rights violations against immigrants,” said Jacobs. “They were just not shy at all about their cruelty.” Jacobs also criticized the current administration’s decision to reopen Homestead. 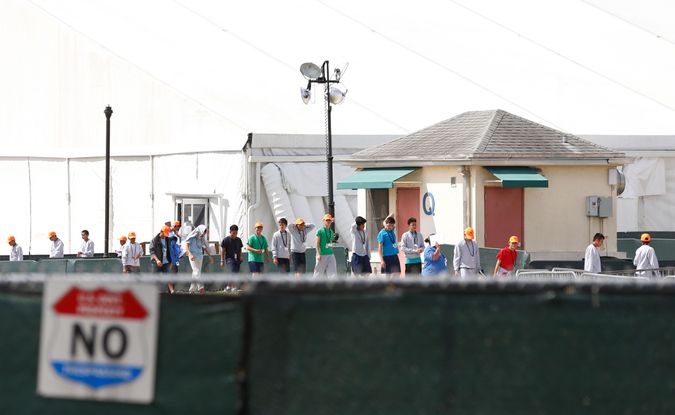 Migrant children who have been separated from their families can be seen in tents at a detention center in Homestead, Florida on June 27, 2019. Photo by Getty Images

While the pro-immigration advocates point out that they were also regular critics of President Barack Obama, dubbed the “deporter in chief” by some, they were jeered by many in the Democratic Party and ignored by much of the media and general public. What many on the left perceived as Trump’s wanton disregard for the rights of immigrants brought what had been a lonely crusade for many activists into the mainstream.

“The last four years, there was an assist from a popular culture and a media that was willing to go after Trump on this issue,” acknowledged Stephen Lurie of Never Again Action, a Jewish group that has made headlines for blockading immigration detention centers.

Lurie said organizing will have to change under Biden, but that even if the media and Democratic leaders pay less attention to immigration abuses over the next four years, activists are still better off because the new administration is more likely to respond to public pressure.

“There is a big opportunity to be successful now in our demands,” Lurie said.

He said the challenge will be for activists to convince their communities that the battle for immigrant rights was not won at the ballot box in November.

“We’ve got to figure out how to bring our friends and our families with us to recognize that it’s OK to have voted for someone because they had better policies and were promoting a better future and also to hold those people accountable,” Lurie said.

As for the Jewish community in south Florida, Bair said he doesn’t know exactly how they will respond to immigrant children once again being detained in their backyard. Biden has pledged that Homestead is being used as a last resort and will only reopen temporarily. Bair said the community’s response may hinge on the details of the center’s operation. But he was confident that the relationships his congregation built with local immigrant advocacy groups means they will be ready to get back onto the streets if that’s what is called for.

“My leaders are gung ho,” Bair said. “When they call and ask us to show up, people listen.”

Jews helped get kids out of Trump’s ‘cages’. Now they face a reckoning.