Rep. Ted Lieu, whose Congressional district arcs across some of the wealthiest neighborhoods in Los Angeles, many with large Jewish populations, has heard from a rising number of constituents over the same alarming issue: Antisemitism.

“Over the last few years my office and I have received reports of hate crimes against Jewish-Americans,” he said in an interview. “Unfortunately, we have seen a spike in hate incidents.”

Generally, he said, those reports include displays of Nazi symbols at synagogues, hate-filled rhetoric and assaults on Jews. “There is a heightened awareness in my district.”

Now, Lieu, a Taiwanese immigrant who is not Jewish, is well-positioned to help in the fight against antisemitism as well as a concurrent spike in anti-Asian hate crimes. 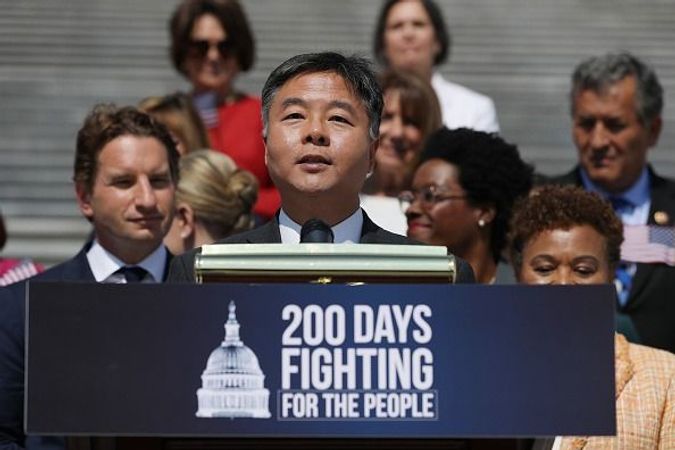 This week, he and Rep. Grace Meng of New York, another Democrat with large numbers of Jews in her district, were named to fill vacancies on the House Bipartisan Task Force for Combating Antisemitism. eight-member leadership panel.

The group’s mission is to denounce antisemitic incidents, evaluate law enforcement efforts and highlight best practices to address the problem. It also gave Congress legislative tools to promote Holocaust remembrance and recommend how to teach tolerance and confront hatred wherever it arises.

By last year, 175 House members had joined the effort, and now, with a rise in domestic terrorism rising, the Jan. 6 siege of the U.S. Capitol as the latest example, the work of the Task Force is more urgent than ever.

“Jewish communities here at home and around the world are under attack, whether in the form of vandalism, physical violence, or online harassment,” the two new leaders said in a statement after assuming their leadership roles. “Antisemitism is not a thing of the past.”

Lieu’s district hugs the western side of Los Angeles County coast from Malibu to Palos Verdes and includes the cities of Beverly Hills and Santa Monica. It is home to one of the nation’s largest population of Jews, not a few of whom work in the entertainment industry. Meng’s district is entirely within Queens, including heavily Jewish neighborhoods of Forest Hills and Kew Gardens.

As Asian-Americans of Taiwanese descent, Lieu and Meng are assuming their leadership positions at a fraught time. Like antisemitism, Asian-American hate crimes are on the rise. The White House on Thursday convened a roundtable discussion on the issue with more than a dozen leaders in the Asian-American and Pacific Islander communities.

The House has no comparable task force for Asian-American hate crimes. But acknowledging the similar history of discrimination against Jews and Asians in the United States, Lieu said in the interview, “It’s not actually a bad idea. I think we’ll look into that.”

Lieu said Jews and Asian-Americans have much in common experiencing hate-based incidents. While Jews have historically been victims of street crime and governmental discrimination through restrictive immigration policies, Asian-Americans have suffered as objects of “yellow peril” racism, the Chinese Exclusion Act of 1882, the internment of 120,000 Japanese-Americans during World War II and now this latest wave: The California State University San Bernardino’s Center for the Study of Hate and Extremism found 122 incidents of anti-Asian American hate crimes in 16 of the largest US cities in 2020, an annual increase of almost 150%. The number of incidents in New York, alone, rose to 28 last year from 3 in 2019, an increase of 833%.

Lieu said the impetus for recent crimes against Asian-Americans comes in part from former President Donald Trump, who delighted in using racist terms to describe the coronavirus pandemic as “the Chinese flu” and “Kung Flu.”

“So you have people thinking that Asian Americans are spreading the virus,” he said.

Even without a separate Task Force, Lieu said Asian-Americans and Jews can learn a lot from each other through their similar experiences, including questions each faces about divided national loyalties.

One of the driving forces in hate crimes overall is the role of white supremacists among far right extremists. In his testimonybefore Congress this week, FBI Director Christopher Wray cited “domestic terrorism” as a chief source of rising hate crimes across the country.

Speaking before the Senate Judiciary Committee, he said, “The top threat we face from DVEs” — domestic violent extremists — “continues to be those we identify as racially or ethnically motivated violent extremists, specifically those who advocate for the superiority of the white race, and who were the primary source of ideologically motivated lethal incidents of violence in 2018 and 2019.”

He said the number of investigations is now about 2,000, twice the number when he was appointed in 2017. In the FBI’s most recent accounting of hate crimes, for 2019, those committed against Jews represented 60.2 percent of all religious-based hate crimes.

Crimes against Asian-Americans have not reached that level. Among crimes committed for reasons of race, ethnicity and ancestry, just 4.4%were directed at Asian-Americans in 2019. But several more recent incidents, including an assault in January against an 84-year-man in San Francisco who died two days later, have intensified a focus on them.

Eradicating the hatreds aimed at both Jews and Asian-Americans will take time, Lieu stressed.

“I can’t say I’m optimistic because the trend lines aren’t good right now,” Lieu said. “At the same time I’ve always believed America is an exceptional country; we’re not perfect, and we do try to fix problems that arise. That’s the reason why we have the Task Force, to try to reverse the trend lines we’re seeing.”