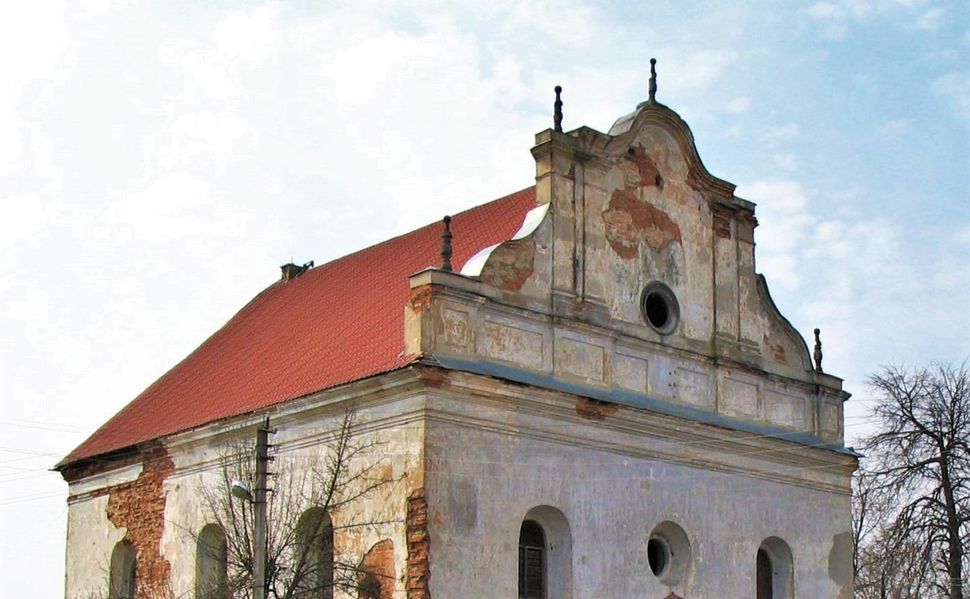 (JTA) — On a visit to the city of Slonim in Belarus, Ilona Reeves fell in love with a 380-year-old dilapidated building that used to house one of the area’s largest and oldest synagogues.

Reeves, a 40-year-old author who lives in the Belarusian capital of Minsk, is a Christian, like virtually everyone who lives in the country. And the synagogue hadn’t been operational since before the Holocaust, when three quarters of Slonim residents were Jewish. Virtually all were murdered by the Nazis.

Still, Reeves looked at the structure, which had fallen into disrepair after years of use as shops, and saw something she wanted to save.

“Standing outside the Great Synagogue of Slonim, I felt how small I am, we all are, in the face of such architectural monuments and traditions they represent,” she said.

With money that she’d freed up by selling her apartment in Minsk — partly to buy the synagogue — Reeves bought the synagogue in December for about $10,000 from the Slonim municipality on the promise that she restore it. She was the sole bidder.

The Slonim synagogue is just one of a number of similar structures to hit the market across Eastern Europe in recent years, and Reeves is among a small group of people who have committed to their upkeep.

“Buildings, including old buildings, that used to be synagogues appear on the market pretty regularly in Eastern Europe, and for relatively affordable prices,” said Michael Mail, founder of the U.K.-based Foundation for Jewish Heritage, which helps restore historic Jewish structures across Europe.

“But there’s often a catch, which is that restoration is complicated and costly,” Mail added.

Reeves knows that firsthand. She is now working on raising $2 million for the restoration project, which she hopes will take a decade but some professionals have told her might go on for 25 years.

The city of Vitebsk, located about 130 miles farther northeast of Minsk, recently offered essentially for free the hollowed remains of the Great Lubavitch Synagogue — where the family of the painter Marc Chagall used to pray — to anyone willing to restore it.

In 2016, a coffee shop called Synagoga Café opened in the old synagogue of Trnava, Slovakia. A non-Jewish contractor, Si­mon Ste­funko, bought the crumbling building some years earlier, renovated it according to the city’s strict preservation requirements and reopened it as an upscale hangout.

Financially, creating Synagoga Café didn’t make any sense, Stefunko said. The renovations cost millions of dollars that the coffee shop didn’t begin to mitigate even before it was shuttered last year due to the COVID-19 pandemic, he said. But he did it anyway “so something would remain from the Jewish community here,” Stefunko said. “I think it’s beautiful.”

The offloading of restoration costs represents the latest strategy for managing a glut of historical Jewish structures that have fallen into disrepair since most of Europe’s Jews were murdered in the Holocaust.

Before the genocide, Europe had an estimated 17,000 synagogues. Only about 3,300 of the structures remain standing today. Among those, only 776, or 23%, are being used as synagogues, according to the Foundation for Jewish Heritage.

Most of the surviving synagogues are located in Eastern Europe, where most of the structures that remained standing were nationalized following World War II by communist authorities who were anti-religious and often anti-Semitic.

Decimated by the Holocaust and the wave of emigration that followed the fall of communism, Jewish communities in places like Slonim and Vitebsk had virtually disappeared, leaving their former institutions in government hands.

In Belarus, which has a dictatorship with no laws for restitution of confiscated Jewish property, many of these structures were listed for protection by local authorities that lack the resources to restore them. Making structural changes to buildings that are listed for protection is difficult and often illegal, requiring special permission from the state or municipality. The protected status often brings down the market price of the buildings because developers have no way of turning a profit by purchasing them.

But many buildings that had housed historical synagogues in Eastern Europe are not listed, meaning once they are sold to private owners they can be altered and even demolished.

The former Great Synagogue in the small town of Ostrino, in western Belarus, is on sale in an auction where the minimum bid is about $40. The new owner will face some requirements to preserve it, but may use parts as a warehouse or residential unit.

And in 2019, a 19th-century building that once was a synagogue in the village of Porazava, near Slonim, was sold for $6,000 to be used as a warehouse.

Similar situations occur also in Western Europe. In 2018, a 200-year-old synagogue in the city of Deventer, in the eastern Netherlands, became a restaurant after its upkeep became unaffordable to the local community, which includes a handful Jews.

Local governments in Eastern Europe have given back many properties that communist regimes had confiscated from Christian and Jewish faith communities.

Christian communities have been able to reclaim, restore or trade up many of the structures returned to them, sometimes with funding from the Vatican and the Orthodox Church.

Similar movement has also happened with some properties given back to local Jews, though with far less deep pockets of support.

In 2002, the municipality of Babruisk in eastern Belarus handed back to the local Jewish community a former synagogue that had been used as an army warehouse and later a tailor shop. The building, the only one of the city’s 42 synagogues still standing, was restored and inaugurated as a synagogue thanks to the fundraising efforts of an energetic local rabbi, Shaul Hababo.

In Moldova, Rabbi Shimshon Izakson is hoping to pull off a similar transformation at the former Rabbi Yehuda Ţirilson yeshiva and synagogue compound — a massive complex in downtown Chisinau that is so dilapidated that only the external walls remain.

But other times, Jewish communities that inherited historic former synagogues stolen from them when they were much larger were not able or willing to preserve them to the satisfaction of their own members.

Earlier this month, a massive chunk of the roof of the 18th-century Great Synagogue of Brody in western Ukraine collapsed. Another part of the building, which is government-owned and listed as a monument for preservation, imploded in 2006. Severely damaged in World War II by German troops who tried to blow it up, what remains of the synagogue is held up by structural scaffolding. No Jews live today in Brody, which used to have thousands of Jewish residents.

The Jewish community of Satu Mare in northern Romania consists of about 100 members. Following restitution negotiations in the 1990s, it owns an impressive 129 cemeteries and four synagogues, which are falling into disrepair because the community cannot afford to maintain them.

“In truth, this building is a drain on our resources, as are the hundreds of graves we need to preserve and fence,” Paul Decsei, the community’s pointman for managing the assets, told the Jewish Telegraphic Agency in 2017 from inside the city’s main synagogue, the Decebal Street Synagogue, an imposing but crumbling 19th-century structure. “But on the other hand, we can’t walk away from any of it. It’s our heritage and we have a responsibility toward it.”

That has also been the case with the Chevra Tehilim prayer house in Krakow, Poland. In 2016, the community-owned structure, which features culturally significant decorations on its walls, was leased by the Jewish Community of Krakow and reopened as a trendy nightclub called Hevre, despite protests by some community members who said it ruined the structure.

Reeves, who bought the building in Slonim before she had even seen its interior, cited its beauty as her reason to go ahead and make the purchase. She envisions a cultural or community space where Judaism would have a prominent place.

As a practicing churchgoer who grew up during communism, Reeves’ decision was rooted in her religious sentiment.

“I’ve always had a dream to build a church. Even a small, wooden one,” Reeves, a mother of one son, told JTA. “With the Slonim synagogue project, it feels like I’m halfway there. Or perhaps I’ve already met the goal.”