What Israel has learned from its battle with COVID-19 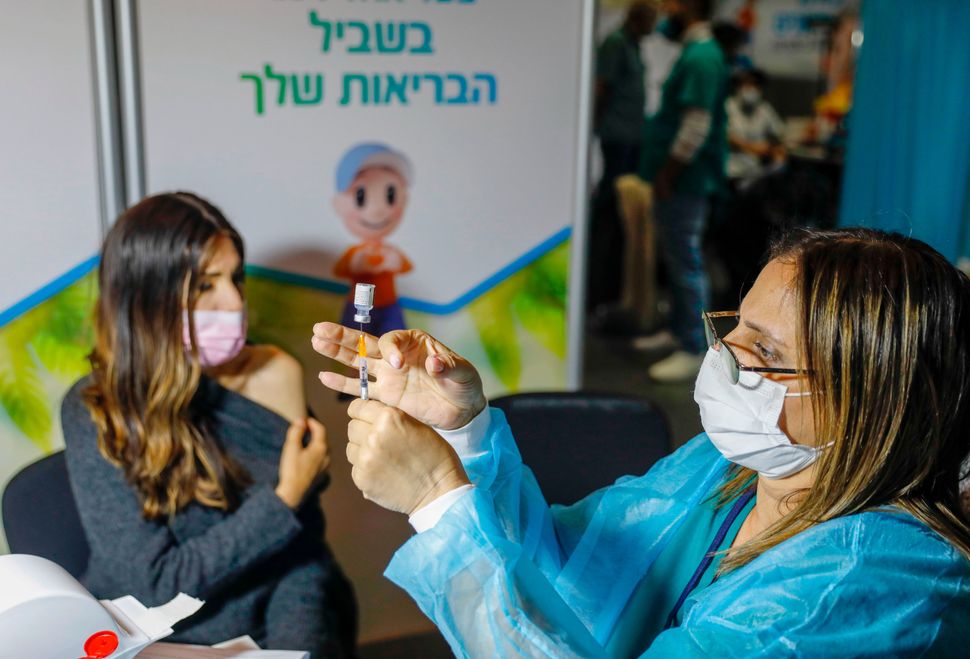 This Q&A is adapted from one of four public conversations about the future of Israel being held every Wednesday at noon ET in a collaboration between JTA and the Israel Democracy Institute in the lead-up to Israel’s March 23 elections. The program is being funded by the Marcus Foundation. To register for the upcoming sessions, please sign up here.

The coronavirus pandemic has helped lay bare Israel’s strengths and weaknesses, from its political and social challenges to its centralized national health care system.

What lessons has Israel learned from the COVID-19 era? What is the country’s path forward as it seeks to emerge from the pandemic and accompanying economic crisis?

The Q&A below, which has been condensed and lightly edited, was adapted from a recent public Zoom conversation featuring the former director-general of Israel’s Health Ministry, Moshe Bar Siman Tov, who led Israel’s initial response to the pandemic, and Karnit Flug, a former governor of the Bank of Israel and now vice president of research and the William Davidson Senior Fellow for Economic Policy at the Israel Democracy Institute.

This session was led by JTA’s Uriel Heilman.

JTA: In the early weeks of the pandemic, when you were leading Israel’s coronavirus response, what were some of the choices you had to make and the tough conversations you had with the prime minister?

Bar Siman Tov: The most challenging thing was to understand that this is something new that’s not similar to anything we’d seen before. It was nothing like SARS. The Spanish flu was 100 years ago. You really can’t know how to shape policy. We had to invent the toolbox. I think Prime Minister Netanyahu was one of the very few people in Israel who really understood the potential risks of the pandemic. He took relatively extreme policies, including closing the airport, which was something we never did before and ran counter to the World Health Organization’s recommendations.

Other tough measures included closing schools, all the lockdowns, canceling all elective procedures in the hospital, including IVF procedures. That was the hardest thing I’ve ever done.

What did Israel do right and what did it do wrong in the pandemic?

Flug: The initial response, the very early realization of the problem and the prompt responses restricting air travel were quite a success. That delayed the pandemic’s growth in Israel. But Israel did not succeed in imposing differentiated restrictions, which would have avoided or at least postponed a very broad lockdown early on. That took a heavy economic toll.

Siman Tov: It comes down to the basic characteristics of the Israeli nation. We are good at short-term response and not very good with long-term events. We didn’t internalize that COVID was going to change some aspects of our lives for a very long time. The system we need to modify the most – which we didn’t — was the Israeli educational system, which was crowded even before the pandemic. The school system was a vector for the pandemic. The second and third waves came from the educational system.

Israelis’ faith in government has taken a hit during the pandemic, surveys show. Is this because there is a sense that decisions about the pandemic were shaped by political considerations rather than epidemiological ones?

Flug: Initially there was a lot of support, and a sense that government decisions were made for good reasons. But that support eroded along the way. There was a lot of political haggling around decisions, and enforcement was very uneven.

Israel has a very diverse population, and some parts of the population were not as willing to comply with the restrictions. There were some ultra-Orthodox funerals with tens of thousands of people and many not wearing masks. The last lockdown disintegrated because there was no adherence to restrictions and no enforcement among some parts of the population. Decisions did not seem to be based on professional considerations but were politically motivated. That really eroded the public trust in the government and led to disobedience of some of the rules.

Siman Tov: Two components are crucial to maintain public trust. First, you must take hard decisions. Second, you must communicate with the public daily, or even more often. These two components changed dramatically between the first wave and subsequent waves. Once the public senses that decisions are being made from political considerations rather than professional ones, then the chaos begins. I think this is what happened.

The numbers went up and up, and the government didn’t do anything. It shook public confidence.

At the beginning, the ultra-Orthodox population stayed at home. They cooperated with us. But it eroded down the road.

What can be done to repair the social ties that have frayed between different sectors of Israeli society over the course of this pandemic, and how does the upcoming election figure into that?

Flug: When you have very frequent election cycles, politicians want to make decisions that are popular and will deliver votes. The frequency of elections brought this short-term thinking to an extreme. When money is given out without any qualifying criteria to everybody, when so many people are hurt badly [while others don’t need financial assistance], this erodes the public trust in the decision-making process and in the government. In many instances, the professional staff was neutralized from the decision-making process.

Elections accentuate the stress and the divisions between the groups. I hope healing can happen after the elections.

What are the implications of uneven vaccination rates between Israel, the world leader in its vaccination drive, and Palestinians in the West Bank and Gaza, of whom very few are vaccinated?

Are young Israelis the Achilles heel of this vaccination drive because young children can’t be vaccinated and young adults are vaccinating at lower rates?

Siman Tov: I believe we will see more and more critically ill kids. I thought at the beginning that the vaccine would be the end game. It is a game changer, but it’s not the end game. It’s possible we will see variants that are more vaccine resistant, so we must develop other tools in our toolboxes. The Israeli strategy toward COVID cannot just be the vaccination project. It should be modifying the educational system as well.

How does Israel’s economic situation compare to the United States?

Flug: Both the U.S. and Israel had a lower decline of GDP than some other countries. Ours shrunk by 2.4%. In the U.S. it was about 4%. The pandemic’s effect was less than initially feared, partly because Israel has a relatively large high-tech sector, about 13% of GDP. Not only did the sector not suffer a decline over the last year but it actually saw a surge in demand for its goods and services. We also have a relatively small tourism sector, about 2.5% of GDP, compared to 7%-8% in some European countries. That protected us from more drastic effects.

What are some of the economic opportunities and silver linings the pandemic has brought Israel?

Flug: The pandemic and the lockdowns demonstrated the great potential of teleservices, from telemedicine to tele-education to doing yoga or cooking classes by Zoom. Sectors like high tech and finance where employees could work at home were to a large extent shielded from the pandemic. This demonstrated the efficiencies of digital technologies: They save time in traffic so there’s less pollution, they give us a lot of flexibility. In the old days, to close a deal or a big investment in a high-tech company would take six or seven trips to come and meet the people and chat. Probably now five meetings would be long Zoom meetings, and there would be two actual trips.

Siman Tov: The fact that Israel has an agile, technology-oriented economy positions us well to deal with this disruption.

Israel was positioned very well in the digital health arena. We have very good big data and analytical capabilities, and I think we made a 10-year leap forward over the last year – not just in telemedicine, but also in artificial intelligence, use of data, machine learning. I think health care will look different and better after the pandemic, and it can serve as a growth engine for the Israeli economy. We’ve seen many tech giants in Israel but not health or pharmaceutical giants, and I think that will change in the coming years.

What are the strong points and weak points of the Israeli health care system?

Siman Tov: The system performed very well during the pandemic. We didn’t leave anyone behind. We reached every patient. We strengthened home care.

How can Israel be prepared for the next foreseen crisis?

Siman Tov: We cannot prepare for every scenario because there are endless scenarios, so the approach is making the system able to function as quickly as possible. There are a few key elements: funding, we need some redundancy in the system both for routine and crisis events. If you want to function well through crisis, you have to function well in the day-to-day routine.

Flug: In this pandemic, low-skill, low-wage workers have taken the hardest hit. They had the highest layoffs and biggest wage reductions. We need to do better training to help people upgrade their skills and reenter the labor market when things start to normalize. A very large part of Israel’s population lacks basic digital skills. We urgently need a large-scale program of vocational training.

When will Israel be back to normal?

Flug: I’m not sure we’ll go back to the old normal, maybe a new normal. The new normal will be much more technological, much more efficient and flexible. We’ll find some kind of a hybrid system between the old way we did business and the new way we’ve been doing business.

Siman Tov: No one really knows what the new normal will be. We should decide what we’re preparing ourselves for — not just our households, but the country and the world. We need to be hybrid and agile. We need to aim for a new norm, and we should be ready to change our system when something bad happens and be able to react to this new situation – whether it’s the educational system, whether it’s the way we do business, and of course the health care system. The pandemic is going to permanently change many aspects of our lives even if the virus goes away tomorrow.

What Israel has learned from its battle with COVID-19