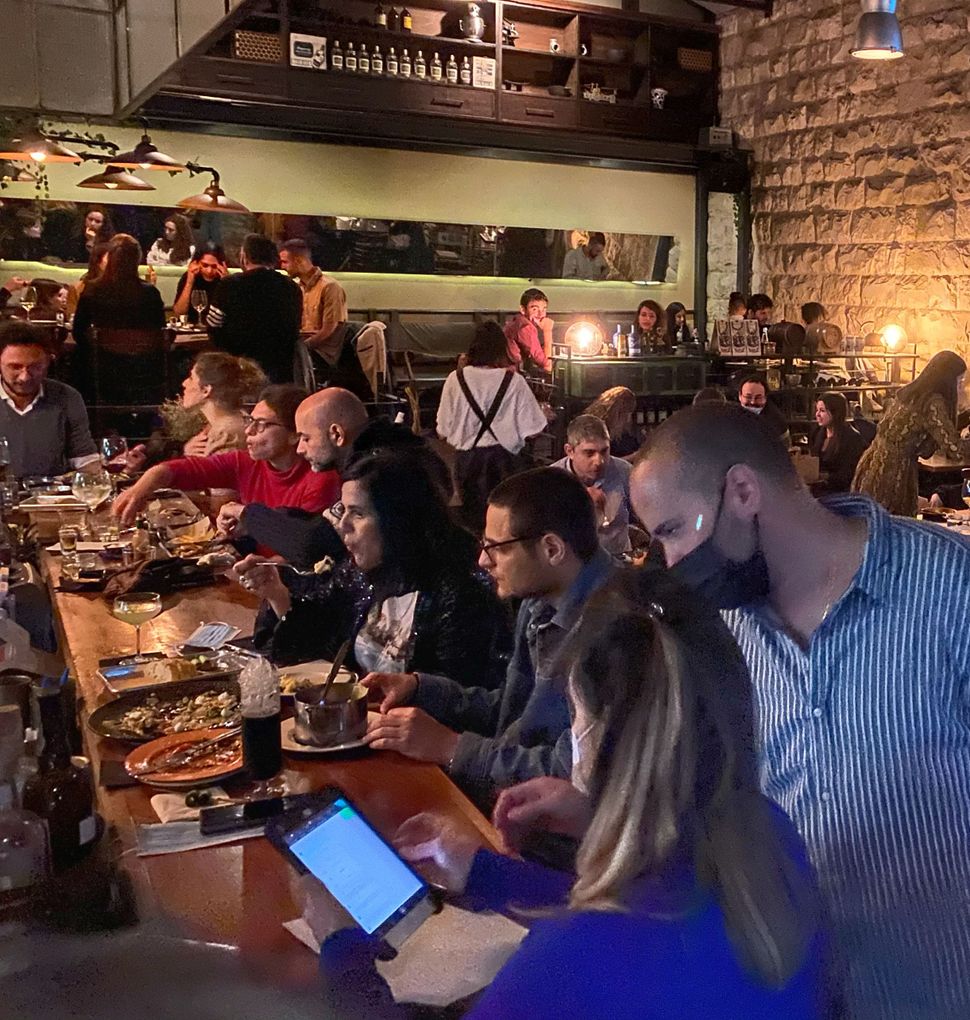 “Green passport” patrons dine indoors at a restaurant in Israel. By Noga Tarnopolsky

On Sunday night, for the first time in a year, patrons filed into the Culinary Workshop, the most neighborly of the restaurants owned by Jerusalem’s high-octane Machane Yehuda restaurant group, and were greeted, seated, and allowed to order the house’s famous truffle polenta with seasonal asparagus, or the “goyim burger” (sirloin patties, Emmenthal cheese, bacon).

In between, masked wait staff checked electronic ‘green passports’ showing proof of vaccination against COVID-19, then informed the lucky ones they could remove their masks.

At one table, a couple seemed intent on resolving an argument. At another, three giddy friends marveled that holding an ice-cold beer made them feel all teary. It took a few moments to realize that there were no families in the room, no children.

A few hours earlier, Assaf Granit, the first Israeli chef to win a Michelin star for creating and serving Israeli food, stood behind the counter at Machneyuda, the group’s flagship restaurant in Jerusalem’s market of the same name, giving interview after interview to television cameras. Outside, a line of sous-chefs smoked and glanced up and down the street, gauging the public’s reaction to the Israeli government’s latest move: reopening restaurants, bars, cafés and events halls to the vaccinated and the cured. 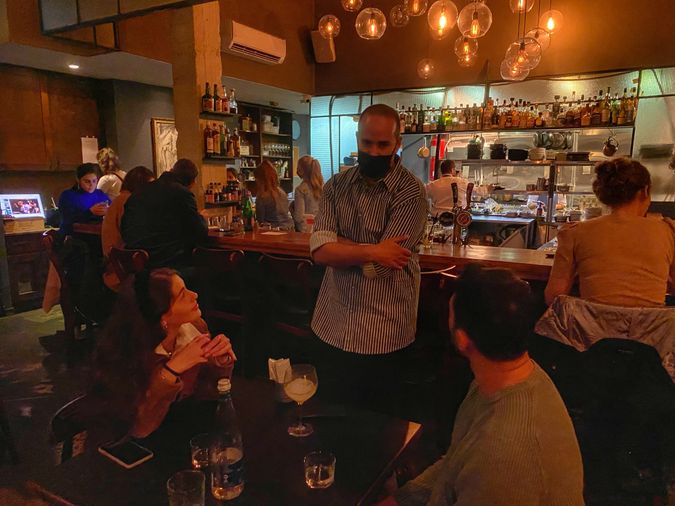 The word “corona” is heard less and less in Israel these days. Weary restaurateurs — those who have not gone under — gripe instead about “the government.” More than a few are keeping their restaurants shut until midweek, anxious about the leaderships changing moods and edicts.

Others, unwilling to police their patrons regarding green passes, have instead installed outdoor tables. The alfresco spaces, where unvaccinated people can congregate—an election-time concession to families, since those under 16 cannot yet get inoculated — are provoking deep misgivings among top health ministry officials.

Coronavirus mutations are running rampant among the unvaccinated here, with the highly infectious British variant now the No. 1 source of contagion in Israel. This week, a Ugandan mutation was identified

A fourth lockdown is one everyone’s minds, though “after the election,” which is two weeks away.

That would be Israel’s fourth election in two years, slated for March 23, as Prime Minister Benjamin Netanyahu continues to struggle to maintain a stable governing coalition amid his ongoing corruption trial. 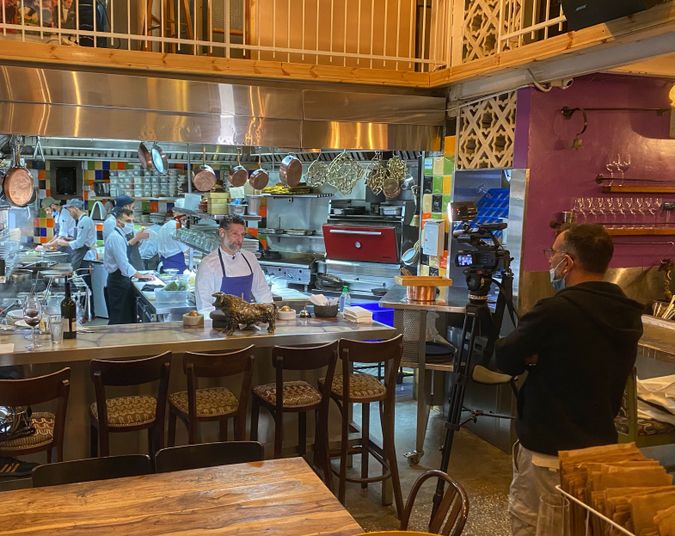 Assaf Granit gives an interview at Machneyuda. By Noga Tarnopolsky

Recent polls suggest his support waning some. The latest poll, published on Monday by Tel Aviv’s Radio 103FM, shows Netanyahu’s Likud Party projected to win 28 out of 120 Knesset seats, down from its current 36. Yair Lapid’s centrist Yesh Atid Party, which has been gaining ground, was projected at 20 seats in the poll.

In a Friday interview on Fox News, Netanyahu optimistically said coronavirus “is behind us,” and, with a smile, floated “vaccination nation” as a new sobriquet for Israel.

After a year of lockdowns and privations, it was unclear how Jerusalemites, historically keen patrons of the city’s bubbly nightlife, would respond. As it happened, they turned out for Sunday’s reopening, exuberant yet sober about the prospects of a real return to normalcy. Many ventured out despite having middle-school children about to restart school the next day, after a year of education-by-Zoom.

Each of about a dozen guests willing to interrupt their evening to answer a journalist’s question said they expect another confinement to come soon enough. They were out to enjoy an Israeli madeleine, a remembrance of things past before they’re taken away again.

The Culinary Workshop’s owner, Doron Yakobovitch, a senior partner in the Machneyuda Group, agreed. “This is temporary,” he said, as music swelled and the restaurant filled at around 10 p.m., “ It is all completely political.”

In order to safeguard the salaries of the Workshop’s 28 employees, Yakobovitch said he is keeping the takeout service running even while reopening for guests who want to enjoy the restaurant in person.

If another shutdown comes, he wants to be prepared, and does not foresee a restaurateurs’ rebellion, which has become something of a local media obsession. “If they say close the restaurant we will close the restaurant,” he said. “We don’t want to be criminals. But still, it’s crazy. Everything else is open and we are the last on the list.”

Israel appears to be spinning in a maelstrom that can be summed up as vaccination, mutation, and election—and is unsure where it will land.