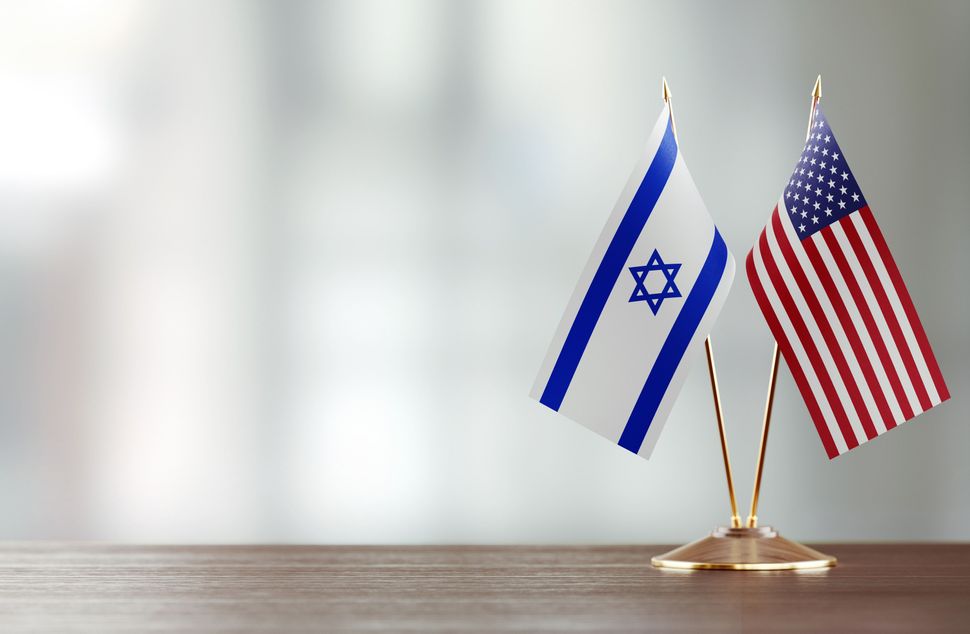 The Israeli and American flags rest atop a table. Photo by MicroStockHub

When Gilad Erdan was growing up in the port city of Ashkelon, his mother predicted that one day he would become Israel’s state comptroller because he was always giving orders on what needed to be fixed at school. He got an early start in politics and by 26 became an adviser to Prime Minister Benjamin Netanyahu in his first term. Now 50, Erdan is Netanyahu’s new ambassador to the United States and to the United Nations — or, as his mother might see it, in a role he was born to: fixing a broken and strained relationship.

After an era in which Israel became an increasingly partisan issue in Washington, Erdan sees his mission as restoring the Jewish state’s relationship with the Democratic Party. But it is a tricky balancing act, while representing the Israeli right-wing government and speaking out in defense of Israel’s security interests. 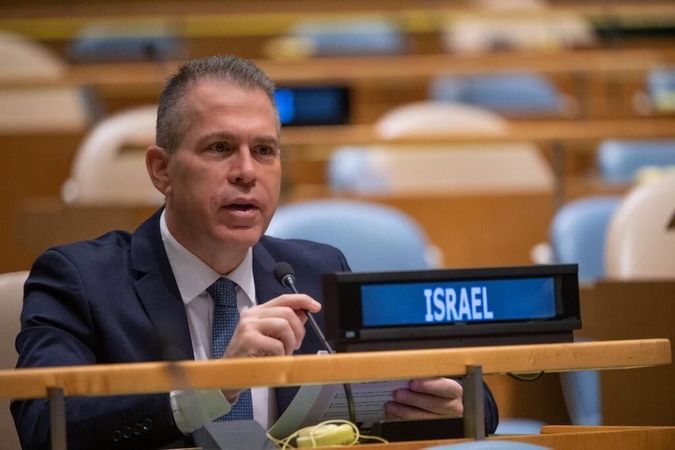 In Washington, Erdan replaces Ron Dermer, who spearheaded Netanyahu’s controversial address to a joint session of Congress in 2015 and was closely aligned with the Republican Party and the Trump administration. At the U.N., he follows Danny Danon, a hard-right Likud member who is opposed to the establishment of a Palestinian state on the west bank of the Jordan River.

With Democrats holding the White House and both chambers of Congress, Erdan sees it as his primary task “to find a mutual language with the Democrats.”

“Most of my meetings are dedicated to learning more about the Democratic Party and to meeting influential people within the party,” Erdan told the Forward in an hour-long interview at Israel’s mission to the U.N., his first with an American Jewish outlet. “I feel strong support for Israel in the mainstream of the Democratic Party.”

Since Jan. 20, he said, he has had virtual meetings with more than 20 members of Congress as well as prominent Jewish Democrats like Rahm Emanuel, the former mayor of Chicago and White House chief of staff, and numerous heads of Jewish organizations. He also spent three days meeting Black leaders and touring civil rights sites in South Carolina and Alabama, chronicling it all on his Twitter feed. [spending three days in South Carolina and Alabama]

“I believe in opening my schedule and showing people what I do every day,” Erdan told the Forward. “It’s helpful to let people understand what my priorities are because they are used to politicians telling them only the things that they want them to hear.”

From ‘yeshiva bucher’ to top minister 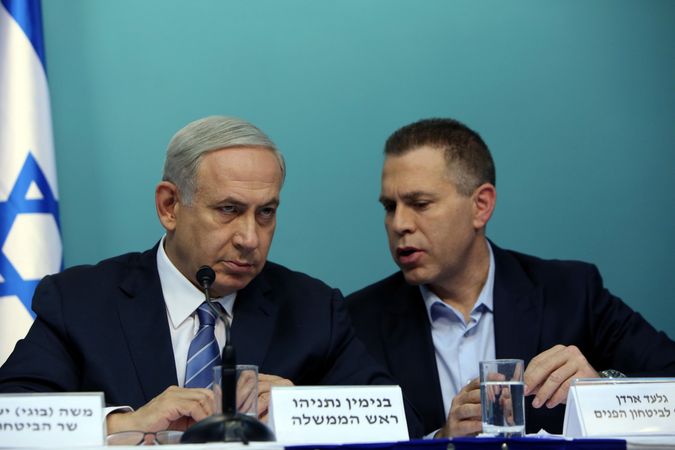 Erdan, who grew up in a modern Orthodox family, recalled joining protests against then-Prime Minister Yitzhak Rabin for signing the Oslo peace accords while a law student at Bar Ilan University.

He was later introduced to Ariel Sharon, at the time a senior member of the Likud Party, and started meeting him regularly. After Rabin was assassinated in 1995, as Erdan was preparing to join the Mossad, Sharon invited him to join his political team ahead of the 1996 elections.

Erdan said he felt it would be a zchut — Hebrew for deserving — and a unique opportunity to work for one of Israel’s war heroes, so he gave up his quest to become a spy and helped Sharon win the No. 2 spot on Likud’s list for the Knesset. Erdan was then put in charge of turning out Haredi voters, the block that was credited with winning the prime ministership for Netanyahu.

When I was a yeshiva bucher, I went to many tishen in the Old City,” Erdan recalled of his time studying at Netiv Meir in Jerusalem, using Yiddishisms for “yeshiva boy” and Hasidic gathering around their rebbe. “So I prepared files about every Hasidic rabbi and rosh yeshiva, so that when he visited them he knew everything about them and the issues that were most important to them.”

After two years working for Netanyahu as prime minister, Erdan was elected chairman of the Young Likud faction and was elected to the Knesset himself in 2003. When Sharon left Likud, Erdan turned on his old mentor and was one of the most outspoken opponents of Israel’s 2005 disengagement from Gaza. Since Netanyahu returned to the premiership in 2009, Erdan has held several key cabinet positions, including communications, homefront defense, public security, strategic affairs and public diplomacy.

Now, he sits at the very desk from which Netanyahu built his own international profile, as U.N. ambassador in the 1980s — but still dreams of one day occupying Israel’s top job.

“Serving here is something that will help me decide whether I’m capable of doing so in the future, he said.

“I am not going to sue you if you write that your impression is that I intend to go back to Israel and become a candidate for prime minister,” Erdan quipped. “But today, it’s not relevant.”

’Not every disagreement should lead to a crisis’ 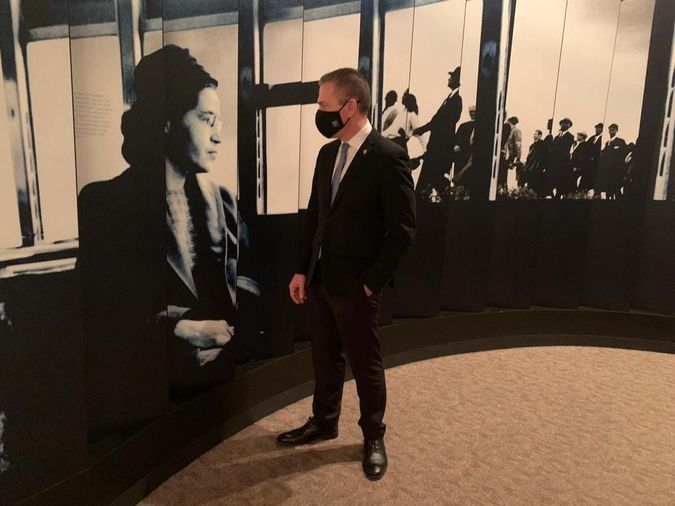 Erdan said he would seek common ground with Democrats on issues like climate change, police reform and civil rights. “Politics is a profession,” he explained. “And if you have those skills you can use them to do good and to promote positive things about your country.”

He cited the Biden administration’s plans to keep the American embassy in Jerusalem; promise to advance the Abraham Accords between Israel; and criticism of the International Criminal Court’s move to investigate whether Israel committed war crimes in the Gaza Strip as promising signs.

As minister of strategic affairs, Erdan was charged with opposing the Boycott, Divestment and Sanctions movement in 2019, when Israel blocked a planned visit by Reps. Rashida Tlaib and Ilhan Omar, who had expressed support for BDS, causing a rift between the Jewish state and their Democratic Party. Amid intense criticism, Israel officials reversed course and said Tlaib, who is Palestinian-American, would be allowed entry to visit her family in the West Bank, but she ultimately decided against the trip.

Erdan said at the time that the government was just following a law passed in 2017 barring entry to any foreigner who makes a “public call for boycotting Israel” or “any area under its control.” In the interview, he said that he had been in a “real dilemma” about the impact barring Tlaib might have in the broader fight against BDS and on the bipartisan support for Israel, “but today, when I see that she continues to spread lies and incitement against Israel, even regarding the vaccines and everything, I think we did the right thing.”

He rushed to add: “I’m emphasizing that I know that she and Ilhan Omar, they do not represent the mainstream of the Democratic Party.”

Because of his dual roles, Erdan said he will split his time between New York and Washington, and that he was taking a Big Tent approach to engaging America’s Jews. “I’m trying to serve as a bridge between all parts of Judaism,” he said. “I understand the importance of all streams in Judaism, and I will engage with all of them.”

But, he noted, as ambassador he is not in a position to change Israel’s policies that can alienate liberal Zionists, such as around religious pluralism. And whether it’s a dispute over religious issues or how to contain Iran, “not every disagreement should lead to a crisis,” Erdan said. “You don’t cut your ties with Israel because you disagree with one, two or three political decisions that were made.”

Erdan added that he feels he has the skills to work through possible disagreements,

In the interview, Erdan didn’t address the political implications of Israel’s March 23 election — its fourth in less than two years — though his job is at risk if Netanyahu loses the premiership. “Israel doesn’t need to prove anymore that we are the most vibrant democracy not only in the Middle East, but around the world,” he quipped. “Every few months, we allow you to change your mind and give you another opportunity to influence.”