Want to ruin a date? Bring up Israel.

Talking about Israel can ruin a date Graphic by Vicente Marti

The piece of sea bass was sort of shaped like the state of Israel, so Danna Shapiro, a Jewish millennial, texted a picture of it to the grad student she was sort of seeing, with the caption: “Zionist fish.”

Not long after they matched on Hinge, Shapiro, sensing the grad student’s politics leaned further to the left than hers, had warned him: “I’m not woke.” He had said he could take it.

But the fish was another matter.

Shapiro, 30, was navigating a new minefield for many American Jewish singles. More personal than partisan politics and more charged than religious observance, differing views on Israel can make for a potent emotional cocktail on a date.

Still texting, Shapiro and the grad student, who she declined to name, volleyed about the merits of Israel’s pre-1967 borders for a bit, and then she tried to lower the temperature. “Look, I don’t normally flirt by discussing Israeli geopolitics,” she wrote. But he wouldn’t let it go. So they plunged deeper into the simmering cauldron of history and identity. They traded jabs about terrorism, human rights and the Occupation. The phrase “morally reprehensible” was invoked.

“Honestly, I’d rather have these super intense conversations before getting serious with anybody,” Shapiro said in an interview several weeks later, “because I want to know how you deal with opinions that differ from your own.” 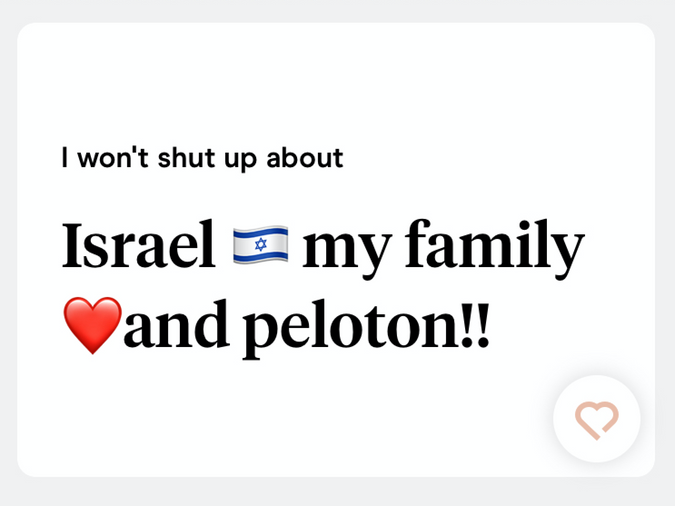 Israel has become a high-stakes litmus test in the American Jewish dating scene: what people say about the Jewish state in their dating app profiles or early encounters can make or break a fledgling relationship. Shared views on Israel can feel like shared values; disagreement can become a grudge. For many, a prospective partner’s stance on Israel becomes a proxy for, well, everything else.

While American Jews still report a strong emotional connection to Israel, criticism of its government has heightened over the dozen-year reign of Prime Minister Benjamin Netanyahu and intensified further during the Trump presidency. And where people with different politics might otherwise remain in separate echo chambers, Jews seeking to date other Jews often cross-pollinate — and run into conflicts.

Shapiro and the grad student texted for more than a month before their first FaceTime date around the New Year. After their second, she said, the fledgling relationship seemed promising. But after their exchange about Israel, he ghosted her.

What follows are three more perspectives of American Jews who find themselves navigating Israel in their dating lives. Shapiro is one of eight Jewish singles I interviewed over the past several weeks who described how Israel factored in their dating preferences. Their ages ranged from 23 to 36, their politics from Republican to leftist, their Halakhic commitment varying from kosher and Sabbath-observant to secular. Four of the eight had stories of Israel becoming an obstacle. In each case, the interview subject declined to share the name of the prospective partner.

“A fraught topic on a date.”

“If you’d asked me 10 years ago how important my partner’s views on Israel are in my relationship with them, I wouldn’t have the same answer,” Eli Shavalian told me. “It’s much more important today.”

Shavalian identifies as liberal; he’s also queer, Persian, and Modern Orthodox. “In the gay community there’s an idea of scarcity,” he said, adding that there are even fewer potential partners who also keep kosher. So when an accountant he’d gone on a few dates with last fall said he was a Republican, Shavalian’s reaction wasn’t to drop him, but to find out more.

“My whole point was to prove to him that we could have a conversation about this without it blowing up,” he recalled.

But when the two spoke about Israel, Shavalian said he found himself struggling to feel heard. It wasn’t simply the accountant’s view that Israel should be the prime factor in voting decisions of American Jews, even at the expense of women’s rights. Shavalian said talking about Israel had revealed something broader about the accountant, and more important. “It was how adamant he was about his view,” Shavalian said, “and how black and white he saw the world.” So he ended things.

Shavalian’s politics are fairly mainstream among American Jews. In AJC’s 2019 Survey of American Jewish Opinion, 62% of respondents agreed that caring about Israel is an important aspect of their Jewish identity. Nearly two-thirds, like Shavalian, favored a two-state solution.

Shavalian wants a partner who has some emotional connection to Israel, even if it’s an ambivalent one, and draws the line at support for the Boycott, Divestment and Sanctions movement. “Israel succeeds in a lot of ways, and it has a lot of faults,” he said. “I would not feel comfortable being with someone who actively only sees the bad of Israel.”

Dov Waxman, director of the Nazarian Center for Israel Studies at UCLA, said that American Jewish political consensus around Israel evaporated gradually, beginning with Israel’s invasion of Lebanon in 1982. What’s new, Waxman said in an interview, is the polarization and toxicity of Israel discourse in the United States, where people with differing political opinions have split into warring tribes.

Over the past decade, some American rabbis have become wary of speaking about Israel from the pulpit, and many young people don’t want to talk to their parents about it. “The disagreement has fueled a rancor and antipathy,” said Waxman, author of the 2016 book “Trouble in the Tribe: The American Jewish Conflict Over Israel.” “It makes sense that it would be a fraught topic on a date.”

Meanwhile, emotional attachment to Israel — what Shavalian feels and is seeking in a partner — has remained steady across American political factions, according to Waxman. What’s changed is how it’s expressed. 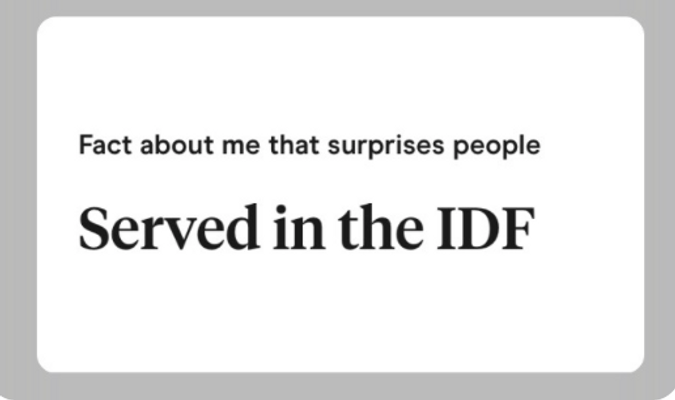 Adam Rotstein has an Israeli parent, did a gap-year program in Israel before going to Wesleyan University, and won’t match with someone who puts “I love Israel” in her Hinge profile.

“It’s kind of a red flag,” said Rotstein, a 30-year-old copywriter who lives in Los Angeles.

Rotstein grew up Conservative in New Jersey and now describes himself as “pretty secular.” He admitted that he doesn’t know the intricacies of Israel’s history and that he wouldn’t be able to wax eloquent on its current political situation. But he said he knows enough to be resentful of the Israel education he got at Camp Tel Yehuda and the gap-year program Year Course, all of which he said reduced a murky quagmire to a simplistic narrative of good and evil.

When he sees “I love Israel” in a bio, Rotstein envisions someone who received the same messaging he did but never challenged it.

Though Rotstein said his friends who know the most about the Middle East are fervent Zionists, he feels that when someone blares “I love Israel” they usually are not that interesting. He laughed as he ticked off what he imagined as a series of equally banal prompts: “Simple pleasures — a good sushi joint. Where to find me at the party — on the dance floor,” he said, for example. “And I’m like, immediate swipe left.”

At the same time, Rotstein said he probably wouldn’t match with someone who included “Free Palestine” in her bio, either. It’s not that dating someone who supports the Palestinian cause is problematic — on the contrary. But he’s suspicious of Israel-bashing, which he says has become trendy among younger Jews on social media.

Rotstein’s position on Israel — certainly open to its criticism, maybe even a touch cynical about it, but wary of extremes — is where Waxman, the professor, said most American Jewish millennials are now. It can be even more complicated if your views are less common. 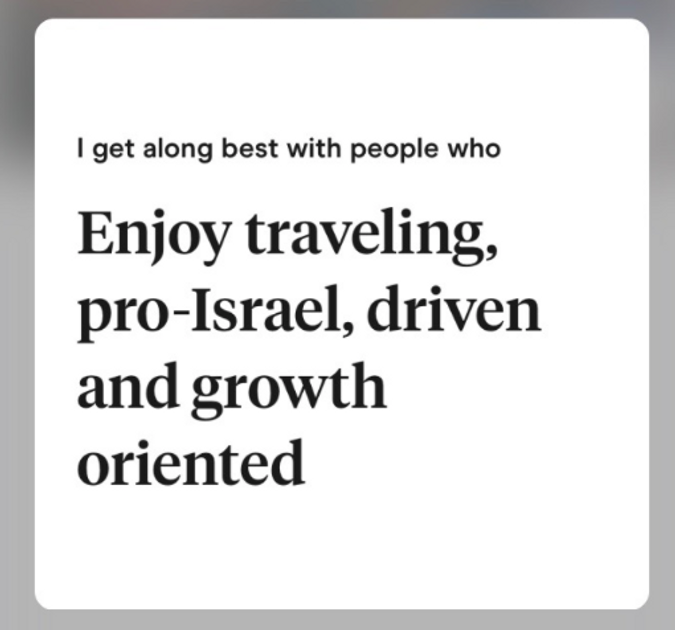 “The worst breakup of my life.”

Jessica Tektas’ Hinge profile lays it all out there: Mizrahi. Leftist. Kosher. Grew up in the Middle East. Inked. Each of those details has factored in a previous relationship; at 36, she’s trying to preempt any problems by being transparent, down to her tattoos.

Identifying as both Zionist and leftist has narrowed Tektas’ dating pool. In her experience, Zionist Jews are often revolted by leftism; Jewish leftists, on the other hand, are frequently anti-Zionist. But as a Kurdish Jew whose family was smuggled into Israel by the Zionist underground in the late 1940s, Tektkas said, “I owe my existence to the state of Israel.” Though she is critical of Israel’s government, anti-Zionism offends her.

In addition to four languages, Tektas, a 36-year-old schoolteacher who lives in Los Angeles, is fluent in American and Israeli politics, and she enjoys talking about them. But the situation she decries — Israel’s treatment of Palestinians in Gaza and what she sees as Netanyahu’s authoritarianism — can make her be less herself when she meets people.

When Israel comes up on a date, she tries to change the subject. “Which ultimately doesn’t really work that well,” she said, “because if you can’t be authentic in a relationship, how long is the relationship going to survive, right?”

And when her opinions do come out, Tektas said, she has been burned. On the night Joe Biden clinched the presidency in November, she said, a film producer she dated on and off for a few years sent her a scathing email. He wrote that she was responsible for Israel’s destruction and that he doubted she was Jewish.

Then the man’s mother followed up with a text pouring it on, Tektas said, calling her a traitor to Israel and the Jewish people.

“All of it was completely predicated on undermining me as a Jew,” she recalled. “He compared me to the SS. He said, ‘I bet you would have loaded the Jews onto the train.’ It was the worst breakup of my life.”

Such vitriol is not uncommon in Jewish debates over Israel, Waxman said, as Israel is often seen as a referendum on a person’s Jewishness both among Orthodox and liberal or secular Jews. To many Orthodox Jews, he explained, Zionism is part of commitment to the faith and tribe. To others, it can be a litmus test around Jewish values like justice.

Faced with a hypothetical choice between a Trump supporter and an anti-Zionist, Tektas said she would prefer an Israeli, whose attraction to conservative politics she can countenance.

“As a leftist Zionist Mizrahi Jew in America, I have to let that stuff go sometimes, because otherwise I have, like, five Jews to date,” she said, laughing. Of Israelis, she added: “They’ve lived it, and it directly affects their life and their families. I’m much more interested in hearing Israelis and Palestinians talk about the Israeli-Palestinian conflict than Americans.”

Louis Keene is a writer who lives in Los Angeles. Email him or follow him on Twitter.

Want to ruin a date? Bring up Israel.