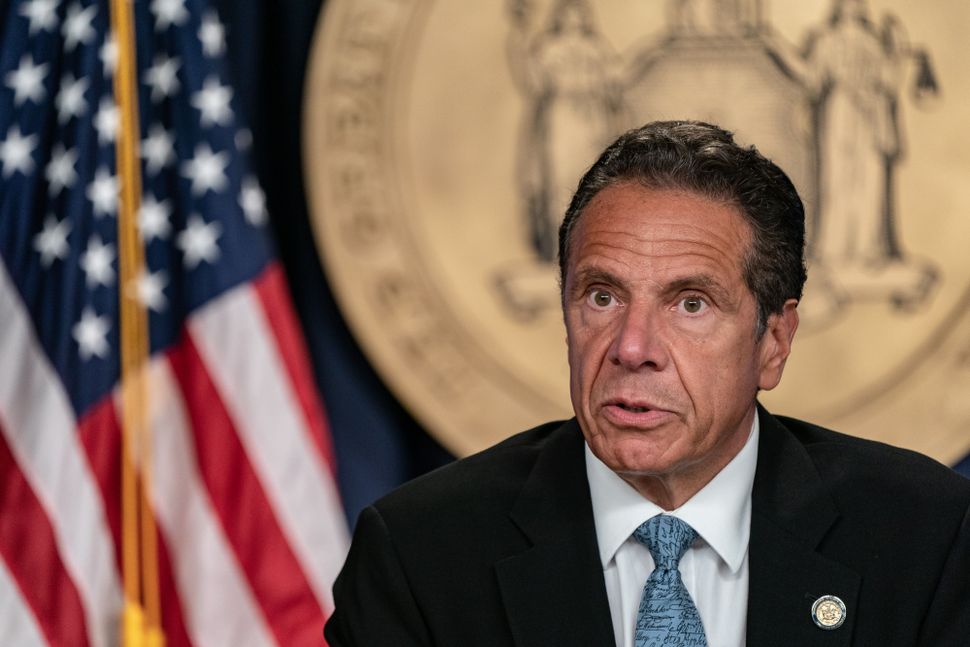 As calls mount for embattled Gov. Andrew Cuomo of New York to step down amid allegations of sexual misconduct, Jewish groups are seeming reluctant to express an opinion. In particular, Orthodox groups, who have expressed their fair share of criticism of Cuomo in recent months, have remained on the sidelines.

“Due to the multiple, credible sexual harassment and misconduct allegations, it is clear that Governor Cuomo has lost the confidence of his governing partners and the people of New York,” the Schumer-Gillibrand statement said. The Senators cited the pandemic as particularly requiring “sure and steady leadership,” and came shortly after Schumer appeared at the signing of a COVID relief package with President Joe Biden, who has so far not taken a position on Cuomo’s future.

But Cuomo maintained his defiance, telling reporters on Friday that he would not bow to “cancel culture.”

“I’m not going to resign,” he said. “I did not do what has been alleged. Period.”

On Thursday, Carl Heastie, the speaker of the New York Assembly, announced that he has authorized lawmakers to establish an impeachment inquiry to examine the allegations. The probe will be led by Assemblyman Charles Lavine, chairman of the legislature’s judiciary committee and president of the New York chapter of the National Association of Jewish Legislators.

Matt Nosanchuk, president of the progressive advocacy group New York Jewish Agenda, told the Forward his group is joining the call for Cuomo’s ouster now that every elected official in their network has done so. The New York Jewish Agenda “is guided by a set of core Jewish and democratic values, including dignity and responsibility,” Nosanchuk said. “The credible, serious allegations against Governor Cuomo, and the manner in which he has responded to them, fail to live up to those values.”

The Jewish Labor Committee, which acts as a bridge between the Jewish community and the labor union movement, declined to take a position on the matter when contacted.

A spokesperson for Agudath Israel of America, the largest ultra-Orthodox umbrella group in the United States, told the Forward that they will not be issuing a statement or offering comments on the scandal or the pending impeachment process. In November, Agudath Israel joined other religious groups in a Supreme Court lawsuit against the governor’s executive order limiting religious gatherings at houses of worship due to the coronavirus outbreak. The Flatbush Jewish Community Coalition also declined to comment.

Yossi Gestetner, executive director of the Orthodox Jewish Public Affairs Council, said that Orthodox Jewish groups have generally refrained from getting involved in such action, despite engaging in lobbying and political activities. “I don’t think it’s a call for charitable organizations and advocates to make, especially from a Jewish values standpoint,” he explained. “You don’t throw proverbial stones onto someone who has already tripped.”

The Orthodox Union in New York did not respond to an inquiry by the Forward.

Audrey Sasson, executive director of Jews For Racial & Economic Justice, reiterated on Friday her group’s initial call for Cuomo to step down. “We’ve been fighting Cuomo for years,” Sasson said. “From supporting Cynthia Nixon’s primary challenge against him and defeating the IDC to fiercely protesting his nursing home policies that have dehumanized and led to the deaths of our elders, and abandoned disabled New Yorkers; from undermining and over-policing the MTA to his predatory behavior towards young women and the culture of misogyny he’s perpetuated in Albany.”

“Cuomo has always been vindictive, cruel, and more concerned with his own ego than the well-being of our state and its residents,” she added. “We’ve said it before and we will say it again. Cuomo has to go.”

On Friday, New York magazine featured more accounts from former Cuomo staffers about his abuse of power and inappropriate behavior. Joel Wertheimer, a civil rights attorney who joined the Cuomo administration after serving in the Obama White House, told the publication he quit his job — being in charge of putting together the governor’s daily briefing book — after seven months because of the toxic environment.

OJPAC’s Gestetner said that while the Hasidic community is not calling on Cuomo to resign, there’s hope that this matter is resolved quickly “because the current state of affairs has frozen out pressing policy issues.”

He noted that the group recently launched a TV ad campaign to lobby the state about restoring patient rights at hospitals, but it has not gained traction because of the Cuomo scandal. “Whether he gets impeached or resigns, Albany is frozen in and it’s unfair to New Yorkers,” he said.