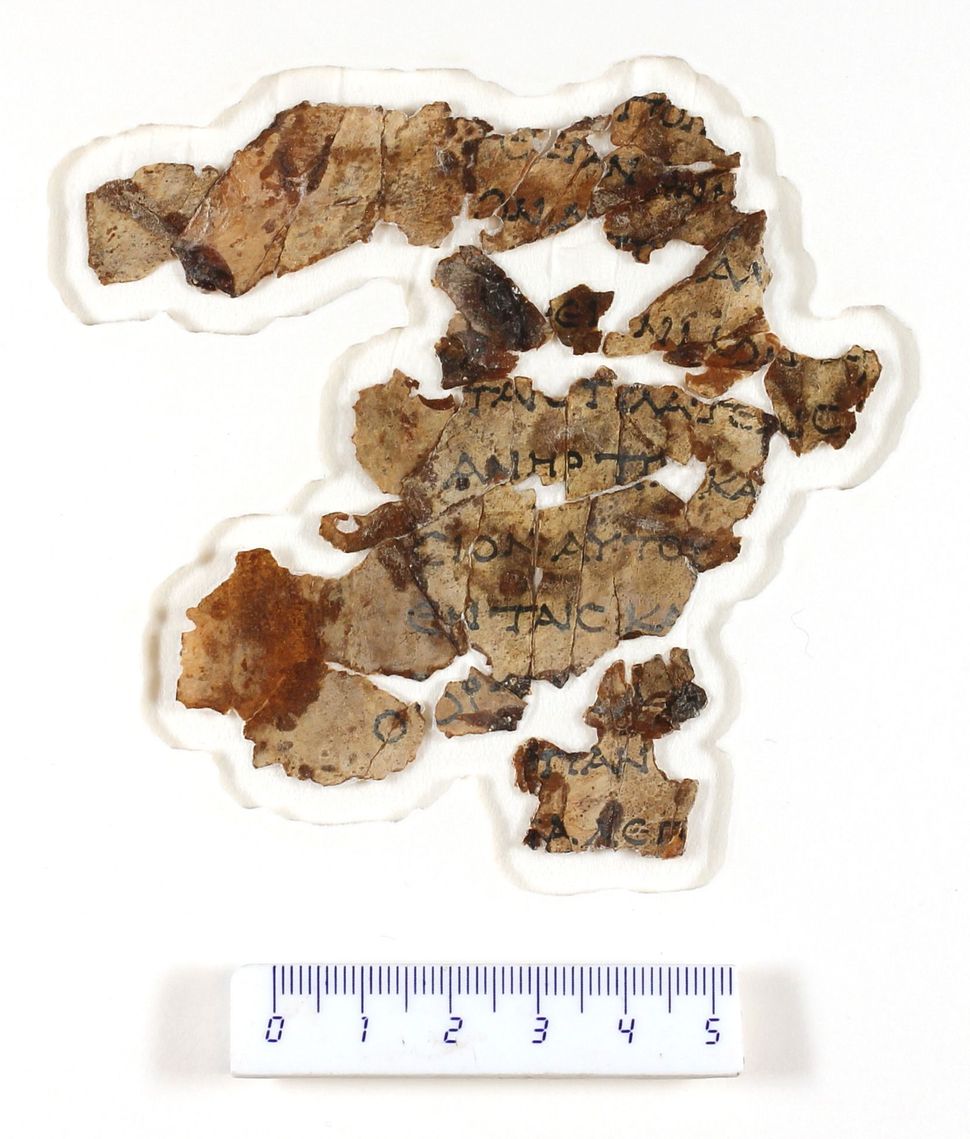 The fragments found included bits of the books of Zechariah and Nahum. Image by Yaniv Berman/Courtesy of the Israel Antiquities Authority

Written mainly in Greek, the newly unveiled scroll contains portions of the book of the 12 minor prophets, including Zechariah and Nahum, the IAA said. 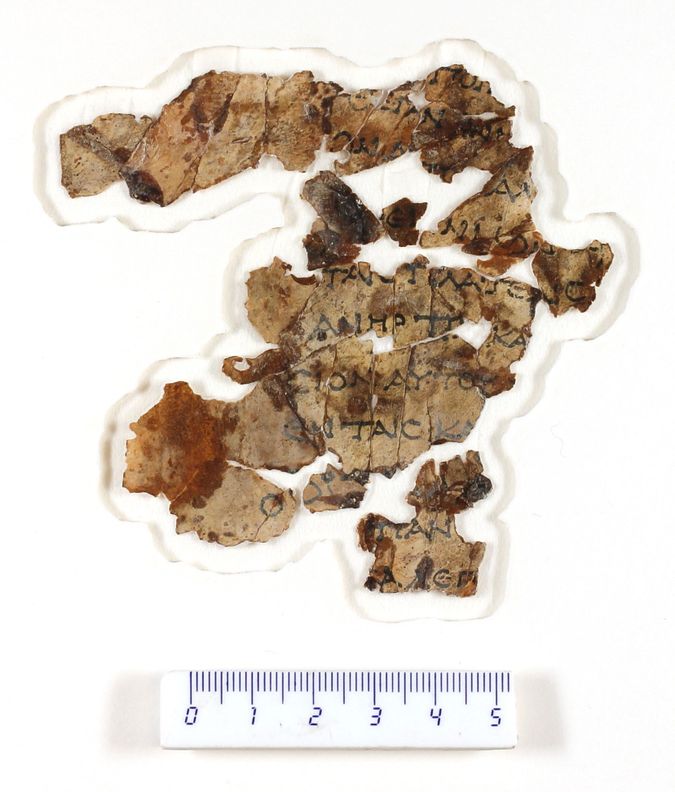 The fragments found included bits of the books of Zechariah and Nahum. Image by Yaniv Berman/Courtesy of the Israel Antiquities Authority

It is likely that the new discovery is a missing part of a Minor Prophets scroll discovered in 1952, which includes Micah’s prophecy about the End of Days and the rise of a ruler out of Bethlehem.

Another particularly exciting discovery in the course of the survey was something completely different: what may be the oldest surviving basket in the world.

Made of woven reeds, the basket – complete with lid, no less – is more than 10,500 years old, based on radiocarbon dating by Prof. Elisabetta Boaretto of the Weizmann Institute of Science in Rehovot, the IAA said. That is the Neolithic period, predating the arrival of pottery in the region (pottery did arise in eastern Asia well beforehand).

Like the much, much-later scrolls, the basket survived all these years because of the remarkable heat and aridity in its location: the Muraba‘at caves in the Nahal Darga Reserve. Moreover, it was big with a capacity of around 90 to 100 liters, which suggested to the archaeologists that perhaps it was used for storage – especially as it had been placed in a pit dug into the floor of the Neolithic-period cave. That in and of itself suggests that it was used for storage by the nomadic peoples inhabiting the area over 10,000 years ago, for the times they visited the cave, the archaeologists say. However, no remains have been found inside the basket, as of writing, that could indicate what it might have been used to store. 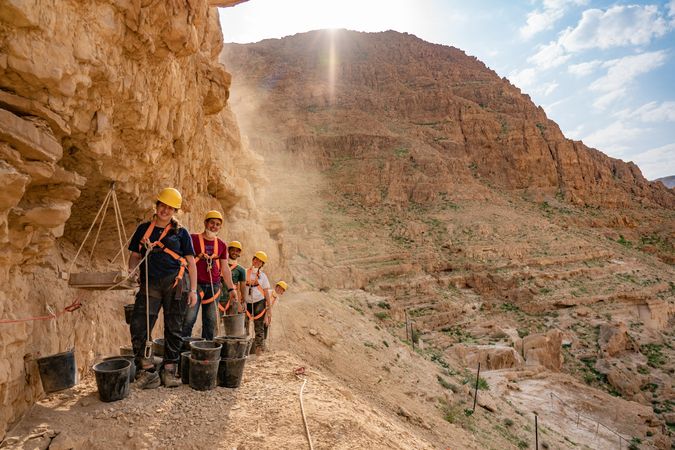 The basket was found by teenagers with the Nofei Prat pre-military academy. Image by Yaniv Berman/Courtesy of the Israel Antiquities Authority

The basket was found by teenagers with the Nofei Prat pre-military academy, the IAA said.

The surveyors also found the naturally mummified remains of a child, likely a girl, wrapped in cloth – as though a blanket had been lovingly laid over him or her, they said. Complete with hair, the body was dated to around 6,000 years ago, predating the scrolls by some four millennia. The child, curled up in a fetal position, was apparently aged 6 to 12, based on a preliminary scan by Dr. Hila May of Tel Aviv University.

In addition, the archaeologists found a cache of coins from the days of the ill-fated Bar Kochba revolt against the Romans in 133-135 C.E. The coins bear the typical Jewish symbols of the time, such as a harp and a date palm.

Working in three teams under IAA officials Oriah Amichai, Hagay Hamer and Haim Cohen, the searchers also discovered arrow and spear tips, woven fabric, sandals and even lice combs from the time of the revolt.

The Cave of Horrors

The Dead Sea Scrolls were written from about the third or second century B.C.E. to the first century C.E., though by whom is not known. Only a few of the approximately 900 found are more or less complete. The rest are damaged and fragmented. Yet study of the scrolls has been possible, including thanks to painstaking restoration. We now know they contain the earliest known versions of many biblical texts, religious apocrypha, commentaries and mystical manuscripts.

Lending credence to the theory that the scrolls weren’t written by a single people, some are in Hebrew, some Aramaic and some in Greek. The newest scroll to be found, or rather the fragments thereof, is in Greek, the IAA said.

Perhaps ironically (from our postmodern perspective) given that the “Scrolls Sect” – the enigmatic authors of at least some of the scrolls – harbored a sense of righteousness versus the evil of the world and harbored apocalyptic visions, among the newly found fragments is a hallmark dovish sentence from the book of Zechariah:

“These are the things you are to do: Speak the truth to one another, render true and perfect justice in your gates. And do not contrive evil against one another, and do not love perjury, because all those are things that I hate – declares the Lord.” 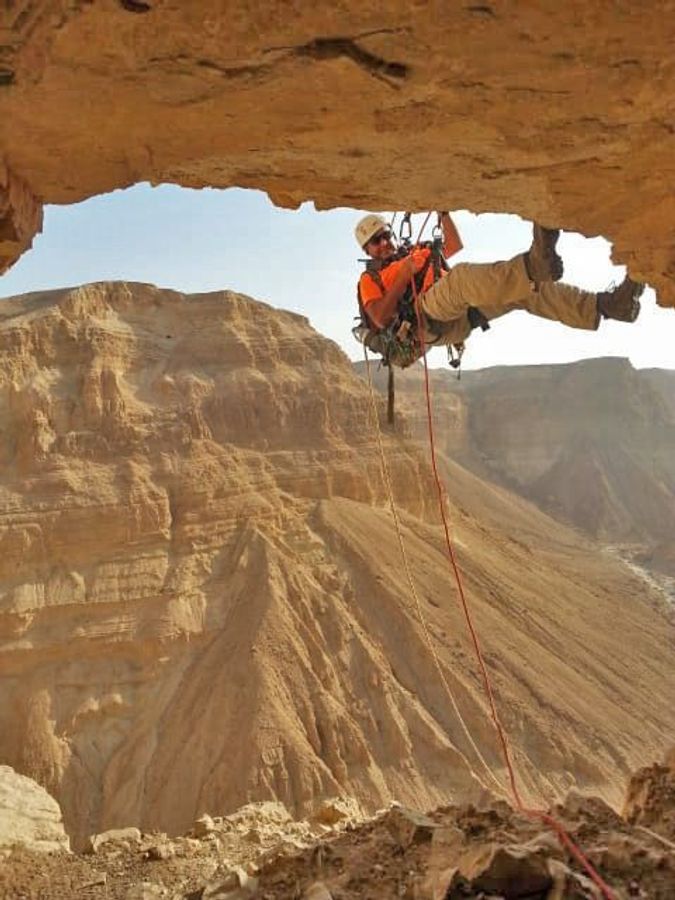 To reach the cave, archeologists had to repel from a cliff over an 80-meter drop to the desert floor. Image by Yaniv Berman/Courtesy of the Israel Antiquities Authority

In another irony, the scroll with these verses beseeching bonhomie was found in the so-called “Cave of Horrors,” the IAA revealed. It’s called that because when it was first excavated in the 1950s archaeologists found the skeletons of 40 men, women and children who had sought refuge there during the Bar Kochba revolt. Remains of a Roman encampment were found atop the cliff on which the cave is located. The lack of signs of violence on the skeletons led archaeologists to suggest the Romans simply besieged the cave until the rebels inside succumbed to thirst or starvation.

It makes sense that the Romans didn’t bother to storm the cave because to access it, one must rappel down some 80 meters (260 feet) from the cliff-top. The IAA begs to bring to everybody’s attention that going there is in fact prohibited, period, lest one fall to one’s death in the desert gorges below.

These extraordinary discoveries were made in a massive mission to find relics from prehistoric and biblical times before looters do, IAA Director General Israel Hasson explained. Antiquities looting is a huge problem worldwide: in January the authorities nabbed a record cache of thousands of precious objects in Tel Aviv.

The national project of combing through all caves and ravines of the Judean Desert began in 2017 as an IAA project in cooperation with the Staff Officer of the Archaeology Department of the Civil Administration in the West Bank, and was funded by the Jerusalem Affairs and Heritage Ministry.

Of all the hundreds of scrolls found to date, only three are relatively complete, depending on one’s definition of “complete.” The rest are in around 25,000 fragments, scholars estimate. Enormous efforts are being invested in trying to reconstruct the texts from the fragments using cutting-edge technologies.

Apropos of which, the IAA noted that even though the new scroll is mostly written in Greek, the name of god, Yahweh, appears in ancient Hebrew letters typical of the First Temple period.

The search is also cutting-edge, by the way. So far, about 80 kilometers of desert caves have been surveyed, including using drones to access especially inaccessible places, the IAA said.

Since a Bedouin shepherd discovered the first scrolls in 1947, these ancient texts have revolutionized our knowledge of Second Temple Judaism and the many groups and sects from which rabbinical Judaism and Christianity eventually emerged. And if there is sure one thing the Dead Sea Scrolls have taught us, it’s that when they were written, the text we think of as the Old Testament hadn’t been finalized yet. Nor had the rituals of Jewish worship, and lest ye be misled by the text from Zechariah, Nahum also had his say in the newly discovered scroll:

“The mountains quake at Him, and the hills melt, and the earth is upheaved at His presence, yea, the world, and all that dwell therein. Who can stand before His indignation? Who can abide in the fierceness of His anger? His fury is poured out like fire, and the rocks are broken asunder before Him” Nahum 1:5–6.