The Fresno Police Department has launched an investigation after video footage and photos shared widely online showed one of its officers attending Proud Boys protests.

The department did not name the officer in its statement on Sunday announcing the probe and subsequent press releases, but the Fresno Bee reported him to be Officer Rick Fitzgerald.

Photos shared on social media purport to show Fitzgerald dressed in Proud Boys garb at a pro-Trump rally in Sacramento last year, and at a more recent protest in downtown Fresno wearing a uniform of the “Sons of 76,” a group described as a “patriotic fraternity.” 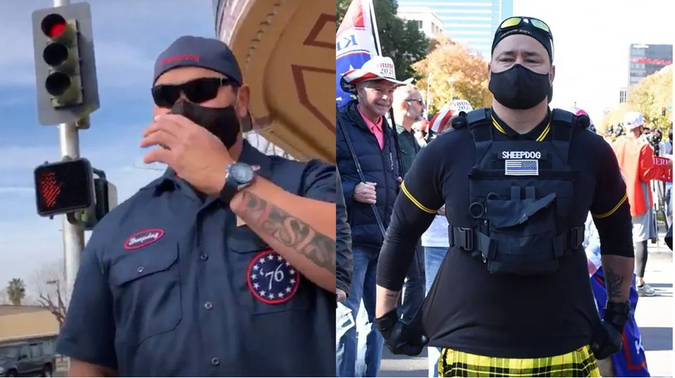 “The officer has been placed on paid administrative leave and his peace officer powers have been suspended pending the outcome of the investigation,” FPD spokesperson Lt. Robert Beckwith wrote in a statement to J.

The images of Fitzgerald first surfaced on the YouTube channel of Eddie Block, a Madera man present at the Jan. 6 Capitol riot whose home was searched by the FBI after the insurrection.

Fresno Mayor Jerry Dyer released a statement on Sunday evening describing the Proud Boys as a “hate group” and commenting on the investigation.

A Statement about concerning images brought to my attention: pic.twitter.com/0DLGjvC11P

“On the afternoon of March 14, 2021, I was informed of images and video posted on social media of a Fresno Police Officer being portrayed as an affiliate of the hate group known as the ‘Proud Boys.’ These images are extremely disturbing and are being taken very seriously.

“As the Mayor of this city, I will not tolerate any City of Fresno employee belonging to organizations that promote views of supremacy, racism, or criminal conduct.

“This matter is under investigation and appropriate action will be taken to address any misconduct.”

Earlier this month two swastikas were found scrawled on businesses in Fresno alongside the words “Real Will.” The graffiti was discovered in the wake of protests that brought Proud Boys and other right-wing extremists to the city as well as left-wing counterprotesters.

The police department said antisemitism or racism in its ranks would not be tolerated.

“Any allegations of actions unbecoming of a police officer or the affiliation with any alleged criminal or hate group will always be investigated and addressed,” the department said in a statement. “Fair and impartial policing are extremely important in our society. There is no place in our police ranks for any biased, racists, or anti-Semitic views.”

The incident is the second this year involving Northern California police officers being associated with right-wing extremism.

On Jan. 8, the Oakland Police Department launched an investigation after a former officer, Jurell Snyder, attended the Jan. 6 riot at the Capitol and former and current Oakland police officers reportedly “liked” his posts from the event.

“Whether on or off duty, employees of OPD are prohibited from affiliating with subversive groups,” the OPD said.

Gabe Stutman is the news editor of J. Follow him on Twitter @jnewsgabe. This article originally appeared in the J. Reposted with permission.