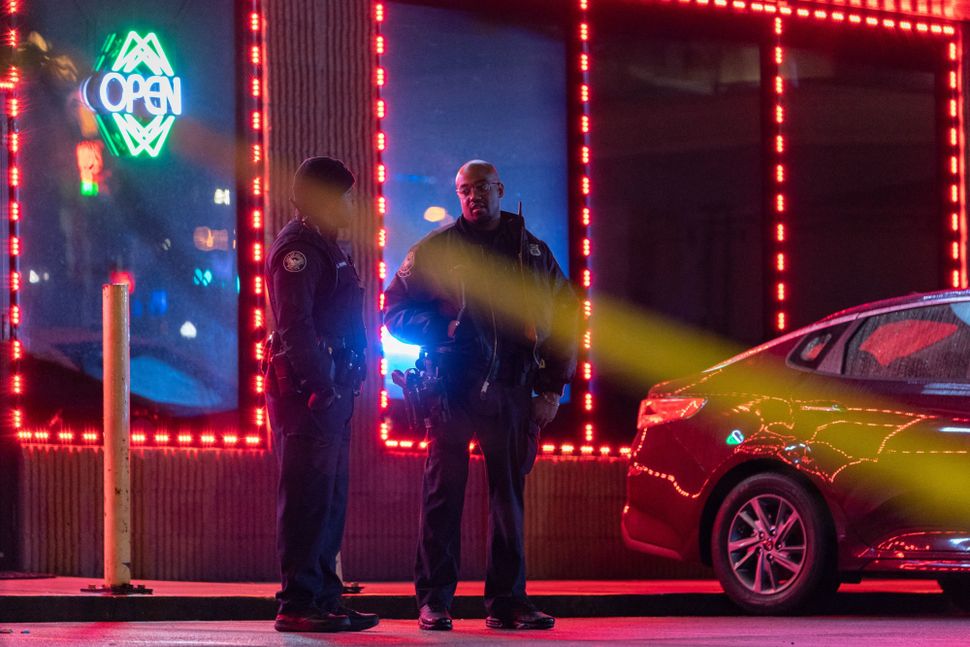 Law enforcement personnel are seen outside a massage parlor where a person was shot and killed on Tuesday in Atlanta. Eight people were killed in shootings at three different spas in Georgia and a 21-year-old male suspect was in custody, police and local media reported. Photo by Getty Images

“Even if the murders were not racially motivated the fact is the Asian-American community is at a heightened sense of alert,” said Dov Wilker, director of the American Jewish Committee’s Atlanta office, referring to the recent surge in anti-Asian hate crimes. “We’ll do anything we can to stand in solidarity.”

“Our hearts go out to them, we are concerned about them and making sure they’re OK.”

Six of the eight individuals killed were Asian and all but one were women, according to police. Law enforcement officials in Atlanta say that a white suspect, who is in custody, told them he was motivated by anger at women.

“Hate toward the Asian American and Pacific Islander community has been rising,” wrote Jonathan Greenblatt, chief executive officer of the Anti-Defamation League. “It is our civic and moral duty to speak out to stop the hate.”

The ADL is working with authorities to determine whether the alleged gunman, Robert Aaron Long, had ties to extremist groups. Allison Padilla-Goodman, the group’s southern division vice president, said that while that remains unclear, white supremacists online were responding to the shooting.

“We’ve seen the same type of extremist chatter online we see whenever these types of things happen,” Padilla-Goodman said. “A lot of it is strictly anti-Asian hate and rhetoric and everything definitely always veers into the antisemitism realm.”

Padilla-Goodman described one image circulating online that referred to Long, the suspected shooter, as a “kike.” Long, 21, is not Jewish. He and his family belong to Crabapple Baptist Church in the Atlanta suburb of Alpharetta.

“Our hearts go out to them, we are concerned about them and making sure they’re OK,” she said.

The ADL released a joint statement with Committee of 100, a Chinese-American leadership organization, condemning the attacks.

“Chinese Americans are Americans. Period,” Zheng Yu Huang, president of Committee of 100, said in the statement. “The violence and rhetoric that is happening now in these communities across the U.S. is horrific, sad, and unacceptable.”

Other Jewish groups were also quick to issue statements in response to the violence, including the Religious Action Center of Reform Judaism and Bend the Arc.

“Across the country, AAPI Americans are being scapegoated, harassed, and assaulted — and a disproportionate amount of these attacks have been directed at Asian American women,” said Bend the Arc CEO Stosh Cotler, using the abbreviation for Asian Americans and Pacific Islanders. “All Americans must show up in solidarity to defeat this toxic combination of anti-Asian bigotry and misogyny.”

A coalition of progressive Jewish organizations including Bend the Arc, Jews for Racial and Economic Justice, IfNotNow and Never Again Action are also promoting a campaign in New York City called #JewsforAsians to help Jews connect with Asian New Yorkers who want someone to accompany them after work or to provide security at vigils.

We keep us safe.

Sign up for #JewsForAsians to be trained and take shifts providing security and solidarity across NYC’s Asian-led vigils, events and calls to action. #SafetyinSolidarity

JTA contributed to this report