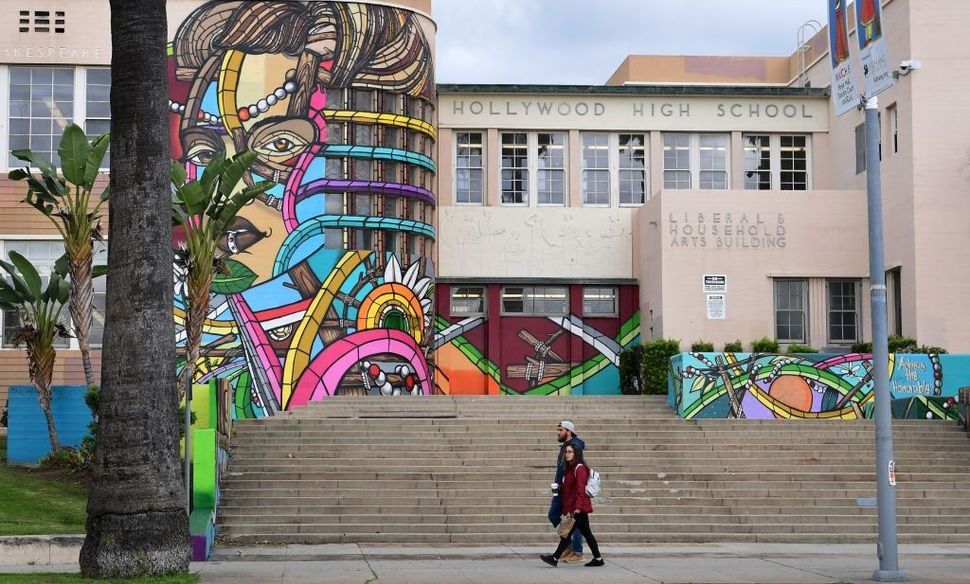 For California education activists across the political spectrum, Thursday marks what Assemblymember Jesse Gabriel, the chair of the state’s Jewish caucus, recently called the “end of the beginning.”

After more than four years of heated controversy, on March 18 the California Department of Education will vote on the fourth and most likely final draft of the Ethnic Studies Model Curriculum (ESMC).

The curriculum, whose first drafts faced accusations of anti-Jewish bias and saw widespread opposition from prominent Jewish groups such as the American Jewish Committee, Anti-Defamation League and various pro-Israel groups like Stand With Us, was created in accordance with AB 2016, a five-year-old statute mandating a commission to “develop, and the state board to adopt, modify, or revise, a model curriculum in ethnic studies.” A 2019 draft, the ADL noted among other concerns, included mention of the Boycott Divestment and Sanctions (BDS) movement, omitted a definition of “anti-Semitism” from the glossary, and in one section, used “the anti-Semitic trope of Jewish control of the media to baselessly accuse Israel of colonizing land.”

While mainstream Jewish organizations like the San Francisco Bay Area’s Jewish Community Relations Council have expressed support for the latest draft — which has addressed all of those points — other activists involved with the process feel deeply hurt by it.

Much of the current outrage on both sides boils down to fundamental disagreements on the value of ethnic studies as a field, sidestepping line-by-line issues of lesson plans that dominated previous iterations of the debate. Some Jewish groups continue to oppose the very existence of a mandatory class devoted to the discipline, while the authors of the original curriculum — most of them people of color and ethnic studies scholars — have requested their names be removed from the document, decrying it as having been undermined beyond recognition and “compromised due to political and media pressure.”

The state board’s deadline for approving such a curriculum is coming up on March 31, according to the Los Angeles Times, and Thursday marks the designated voting day on its latest draft.

While the original 2016 bill said only that the state would “encourage” school districts to offer ethnic studies as a course based on the model curriculum, a new bill currently in the assembly would make its adoption mandatory for K-12 schools. Last September, Gov. Gavin Newsom vetoed the new bill, wanting to wait until “clear course guidelines” had been approved.

For many Jewish groups, the curriculum’s latest version is an acceptable compromise, or even a victory.

Gabriel, the Democratic state legislator from Los Angeles, said in an interview this week that the yearlong efforts to “reshape the curriculum” led to a “vast improvement” and that he personally supports the ESMC. The big picture, the assemblyman said, is that members of the Jewish community “for the most part feel that there’s been tremendous progress.”

As it stands now, the ESMC includes two full lessons related to Judaism: one titled “Antisemitism and Jewish Middle Eastern-Americans” and another titled “Jewish Americans: Identity, Intersectionality, and Complicating Ideas of Race.” The first and most contentious draft had not featured any lesson plans on Jewish Americans.

“The fourth draft of the Ethnic Studies Model Curriculum, while not perfect, appears to address the major concerns identified nearly two years ago by JCRC,” said Tyler Gregory, the executive director of the Bay Area JCRC, in a statement to The Forward.

Still, for some Jewish Californians who appreciate the changes in the latest draft, concerns remain.

Three Jewish studies professors, including Stanford professor Ari Kelman, wrote on Tuesday to the state board in opposition to the model lesson plan that “moves antisemitism to the center of the discussion” and, according to the professors, offers “only the barest insight in the richness and diversity of Jewish life.”

And last week, JIMENA, a group whose stated mission is preserving and elevating the history of Jews indigenous to the Middle East and North Africa, released an open letter co-signed by 13 groups including the ADL and AJC, saying that while the group is “grateful for the progress that has been made,” it requests that the lesson on “Jewish Middle Eastern-Americans” be moved up to the “Asian American Studies” section.

The singular lesson on “Introduction to Arab American Studies” follows the two lessons on Jewish Americans, and all three appear at the tail-end of the document, in a section called “Seeking Models of Interethnic Bridge Building.”

The Save Arab American Studies coalition, a group formed in opposition to the latest iteration of the draft, objected to the current placement of the Arab American lesson plan.

“Put Arab American Studies—including Palestine—back where it belongs, within the Asian American Studies section of the ESMC,” their petition reads. (Any mention of the word “Palestine” has been removed from the 437-page document.)

The Save Arab American Studies coalition’s issues with the draft, however, go far beyond the placement of the lesson plan. In an open letter, it urges the state board of education not to move forward with the curriculum until it “restores the original key Ethnic Studies concepts, guiding values, and principles which make Ethnic Studies the academic discipline it is today.” The group argues that, through four cycles of revision, the curriculum has been distorted by “those outside the field.”

“The current revisions of the curriculum are the worst yet,” Lara Kiswani, the executive director of the Arab Resource and Organizing Center, wrote in an exclusive statement to The Forward. “The critical edge of Ethnic Studies has been white-washed throughout the curriculum.”

UC Berkeley’s Department of Ethnic Studies, the largest of such departments in the nation, defines the discipline as “critical and interdisciplinary study of race, ethnicity, and indigeneity with a focus on experiences and perspectives of people of color within and beyond the United States.”

Kiswani said that one of her group’s primary asks was that only Ethnic Studies experts revise the curriculum. “Instead, the CDE allowed predominantly white, rightwing interest groups to define and shape a curriculum that is meant to center the experiences and movements of communities of color,” she wrote.

Ellen Brotsky, a volunteer leader with Jewish Voices for Peace-Bay Area, said in a statement to The Forward that the “decolonial, liberatory” effort of the curriculum’s original authors had been “hijacked by anti-Palestinian, pro-Israel organizations,” producing a draft “so watered down” that she opposes its adoption.

“As it stands, CDE has failed to fulfill its mandate under AB 2016,” Kiswani wrote. “This is not an Ethnic Studies curriculum.”

But for some Jewish activists vocal on the issue, the elimination of “ethnic studies” from mandatory high school curricula is itself the stated goal — and the draft as it stands now doesn’t go far enough.

Tammi Rossman-Benjamin, the head of the AMCHA Initiative, a group founded to fight antisemitism at American institutions of higher education, said in an interview Wednesday that her objection to ethnic studies is that “it’s not really a discipline — it’s a political movement.”

“It became clear that the issue wasn’t just a few political activists that opportunistically used the curriculum to throw in anti-Zionism, but in fact that is the nature of the curriculum,” said Rossman-Benjamin, a lecturer at UC Santa Cruz. In her view, the “keepers” of the discipline of ethnic studies are “at their core anti-Zionist.”

“Ethnic Studies is at its core antisemitic,” she said, adding that “the way that it views the world through the lens of race, dividing people along the colors of their skin is just so anti-Jewish — it’s basically an anti-Jewish perspective.” When viewed through this “lens,” Rossman-Benjamin found that Jews are identified as “white and privileged,” a binary categorization she finds harmful.

“I think that’s lost on many people because we’re so wrapped up in line items on this curriculum,” she said of the Jewish community. “For us, it’s the bigger picture, it’s the issue of the whole curriculum, the way it was conceived.”

One hundred forty-five scholars from universities across the country, in a letter organized by AMCHA, called on the state board to withhold approval of the curriculum, claiming that some information in the document is “misleading and unsubstantiated.”

Looking ahead, if the curriculum passes, none of the activists would feel their work is at an end: If anything, it’s only beginning.

“We’ve already begun working to make sure that this doesn’t become a requirement in schools,” Rossman-Benjamin said, referring to the new bill in the state assembly that would make ethnic studies courses high school graduation requirements.

Organizations like JVP-Bay Area and others involved with Save Arab American Studies, meanwhile, will continue to fight for their visions of ethnic studies to be incorporated on the local level in California’s schools, which for Brotsky means “inclusion of Arab-American and Palestinian history and narratives.”

“We will continue to work to ensure that our students across California are able to access a curriculum that is anti-racist,” Kiswani said, “and builds on the legacy of the students of 1968 that set out to open educational institutional institutions to the histories, cultures and movements, or racially oppressed people including Palestinians.”

For Assemblymember Gabriel, the 11th-hour fight — after a four-year one — ahead of Thursday’s vote embodies the reality that “this is an extraordinarily complicated endeavor.”

“It’s just going to be impossible to please everybody with this,” he said. “There are going to be people on all sides of this that continue to push.”