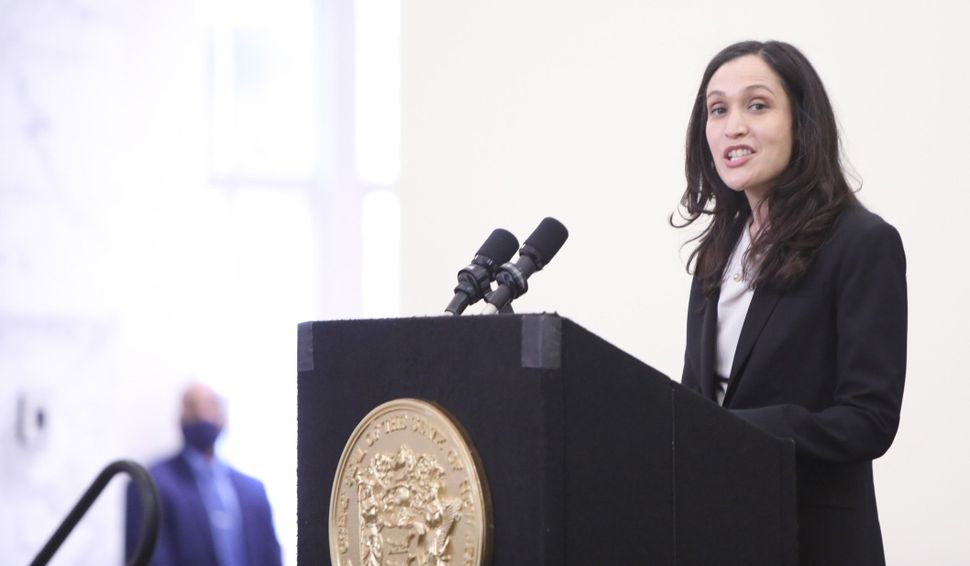 When Rachel Wainer Apter told her three children that she had just been nominated as a justice of the New Jersey Supreme Court, they were overwhelmed with excitement. “They laughed, they cried, and they screamed – all at the same time,” Apter, an Orthodox Jew and resident of Englewood, NJ, told the Forward in an interview. “I think that that was a perfect encapsulation of how I felt as well – incredibly grateful.”

Apter, 40, has served as director of the state Division of Civil Rights in the Attorney General’s office since 2018. Earlier this month, Governor Phil Murphy – who is running for re-election in November – chose her to replace Associate Justice Jaynee LaVecchia, who is retiring on August 31.

“Judaism is a huge part of my life right now, but specifically when it comes to my work.”

In an interview, Apter said that learning about the Holocaust at a young age while attending Jewish day school is what drew her to advocating for civil rights and social justice. “I had vivid dreams that I was living during the Holocaust,” she said. Apter described her formative years at the Gottesman RTW Academy, formerly known as the Hebrew Academy of Morris County, in Randolph, N.J. and a year-long period of reading books about the Holocaust. “I knew at the time that the world, in so many ways, was profoundly unfair and that people had the capacity for evil when dehumanization started and when people allowed themselves to see other human beings as somehow subhuman or not worthy. And so I always knew that that was something that I wanted to address.”

While attending Harvard Law School, Apter said she “figured out” that civil rights law and the promise of equal justice under the law was key to having people’s dignity affirmed. After graduating in 2004, she clerked for Jed Rakoff, a former federal judge for the Southern District of New York, and then for Robert Katzmann, the chief judge of the Court of Appeals for the Second Circuit. She then went to work for the late Supreme Court Justice Ruth Bader Ginsburg.

Apter described Ginsburg as “an incredible boss, mentor, and friend.” The announcement of Apter’s nomination fell on Ginsburg’s 88th birthday and was held at the newly renamed Ruth Bader Ginsburg Hall at Rutgers Law School, where RBG served as a professor. “I think the most important lesson from her was how the law impacts individuals every single day,” Apter said. “For Justice Ginsburg, every single case was the most important case in the life of the litigants and in the life of the individuals who the law would impact.”

In her acceptance speech, Apter mentioned how her great-grandparents fled antisemitic persecution in Russia and Europe in search of freedom. And she suggested that the concept of tikkun olam (repairing the world) in the Jewish tradition is what inspires her to fight hatred and bigotry. “Judaism is a huge part of my life right now, but specifically when it comes to my work,” Apter said in the interview. 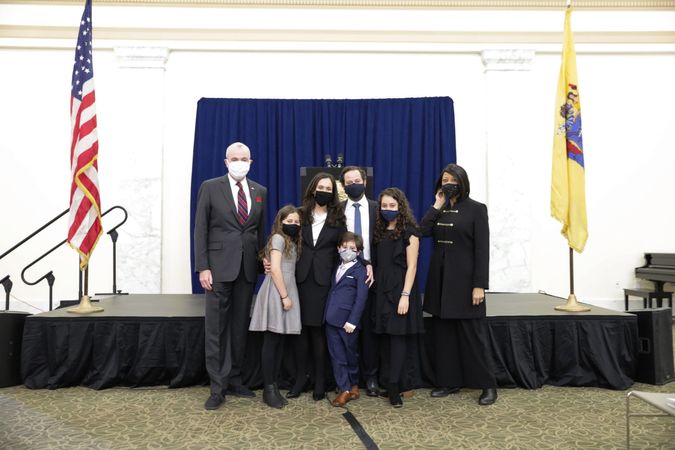 Growing up in Rockaway, NJ, Apter attended White Meadow Temple, a Conservative synagogue. After graduating from the University of Pennsylvania, she spent a year working at the Religious Action Center, the policy arm of the Reform movement. She is now a member of Kehilat Kesher, an Orthodox synagogue serving the New Jersey towns of Tenafly and Englewood, and her children attend the Solomon Schechter Day School of Bergen County.

Apter joined the Murphy administration in 2018 after serving on the Democratic governor’s transition team, and following a career as a senior staff attorney for the American Civil Liberties Union. In 2019, she led an effort to have the “Rise Up Ocean County” movement removed from social media platforms for targeting the Hasidic community in Lakewood, NJ.

“The Division on Civil Rights works to protect the civil rights of all New Jersey residents,” she said. “And I have been incredibly grateful to be able to work across all issue areas over the past several years in an effort to bring us closer to achieving the promise of equal rights.” Apter said that addressing systemic bias and systemic racism is a key civil rights issue that needs to be fully acknowledged and addressed.

Apter’s nomination is pending approval from the state bar association and must be confirmed by the Democratic-controlled state senate. If confirmed, she would tilt the NJ Supreme Court to a majority of Democrats in the seven-member body. LaVecchia was an independent in the evenly split court.

Her nomination received broad support from the local Jewish and faith-based communities.

“The idea of tikkun olam is the most important part of Judaism, or just as important as Shabbat, kashrut, or some of other things that are more closely associated with traditional observance,” Apter explained.