The Confederate governor who loved Jews: A monument to Zebulon Vance is coming down in Asheville, NC 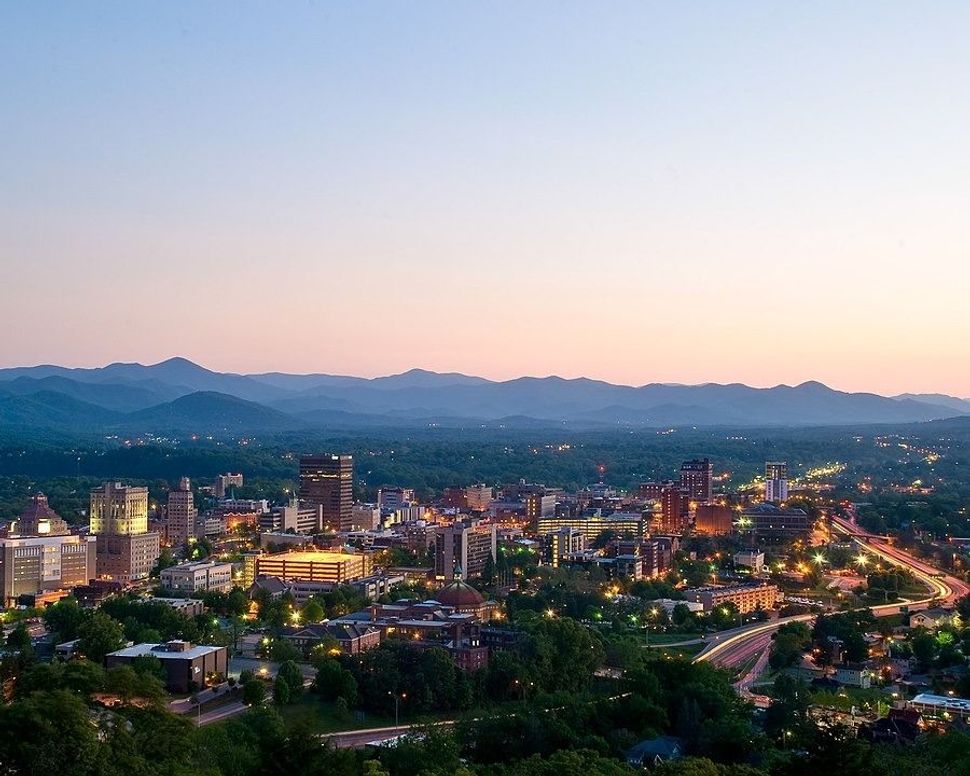 ASHEVILLE, N.C. (JTA) — A granite obelisk at Pack Square in this city’s downtown has commanded attention for more than a century. It’s an iconic landmark, set in a spot where groups from evangelicals to Black Lives Matter protesters go to be heard.

The Zebulon Baird Vance Monument will soon be iconic no more.

On March 23, the Asheville City Council voted 6-1 to dismantle it. The move is the latest step in the city’s soul-searching following the death last year of George Floyd and calls from at least one group, Black Asheville Demands, for the monument to go. When local artists painted a Black Lives Matter street mural, organizers chose the street circling the monument.

A local task force considered several options for the monument, including repurposing the obelisk or adding historical context, but ultimately recommended removal. Now that the City Council has agreed and a judge has denied a motion to prevent the removal, the monument may be gone by May — joining the more than 100 symbols to the Confederacy nationwide that have been removed following Floyd’s death.

Vance owned enslaved people and resisted emancipation. What made him different from other prosperous Confederates was his advocacy for Jews. In a speech delivered hundreds of times across the country, Vance championed acceptance of Jews as they faced rising anti-Semitism — though he used deeply bigoted language to do it.

Following Vance’s death, according to historian Selig Adler, the local chapter of B’nai B’rith and the United Daughters of the Confederacy remembered his support for Jews annually in a joint ceremony. The ceremony continued each year at various locations, including Vance’s birthplace and grave, until the early 2000s.

As Asheville and other cities grapple with historic racism and its present-day effects while the U.S. approaches the one-year anniversary of Floyd’s death, some groups believe Vance is overdue for reassessment in the Jewish community. Why did he admire Jews while considering Black people subhuman, activists are asking? How did a monument to him rise in a town square where slaves were likely traded and sold? Given that history, why did some in the Jewish community lavish him with praise?

Vance began his political ascent early. Born in 1830 to a slave-owning family in western North Carolina’s Reems Creek Valley, the charismatic young man knew how to connect with voters, winning a seat in the U.S. House of Representatives before he turned 30.

“He could be clever and charming, but also very sarcastic and cutting. His wit would play well on Twitter, but he would probably alienate as many people as he delighted.”

Vance and his wife, Hattie, owned six slaves by 1860, yet initially opposed Southern secession. In Vance’s own account, according to historians, he was “canvassing for the Union with all my strength,” addressing “a large and excited crowd” with his arm raised skyward when news arrived of the attack on Fort Sumter in 1861. As his “hand came down from that impassioned gesticulation,” he changed his mind and rallied his audience to fight for the Southern cause. North Carolina voters elected him governor the following year, making him the state’s leader of the Confederacy.

When the South lost the Civil War, his cause a failure, Vance was arrested in 1865 at home in Statesville.

“Vance was a corpulent fellow,” said historian Leonard Rogoff, president of Jewish Heritage North Carolina. “The federal troops are going to humiliate him by putting him on a mule and taking him to the train to go to prison.”

A Jewish merchant and fellow Mason, Samuel Wittkowsky, saved Vance from shame by offering his carriage for the journey.

Vance lingered in a Washington, D.C., prison for all of two months. Still one of the state’s most prominent politicians, he returned to Charlotte to practice law and, though disavowing the Ku Klux Klan, nevertheless urged white men to defend their race, stand against social equality and oppose the Republicans’ biracial party.

Sometime during this period, between 1868 and 1873, Vance first wrote and presented “The Scattered Nation,” the speech that advocated on behalf of Jews. Unlike other minority groups under the Confederacy, Jews had found some degree of status among the secessionists: Jews served in the Confederate army from privates up to officers, and Judah Benjamin, a Jew who grew up in Charleston, South Carolina, served as the Confederacy’s secretary of state.

Vance’s support was undoubtedly a relief to some Jews.

“This is a time in Jewish history when Jews are the Christ killers. There’s a lot of anti-Semitism even in America, not just in Europe,” said Sharon Fahrer, a community historian in Asheville.

The text itself is eye-popping in its racism — a fact that was pointed out by two Asheville-area Jewish groups, the Jewish Community Relations Council of the Greater Asheville Area and Carolina Jews for Justice/West, in comments submitted to the Vance Monument task force.

Vance “classifies Jews in a hierarchy of worthiness according to their geographic origins. Not surprisingly, white, Ashkenazi Jews from Western and Central Europe rank highest,” the groups wrote.

White Jews, in Vance’s view, compares especially favorably to “the African negro, the descendants of barbarian tribes who for 4,000 years have contributed nothing …”

The speech echoes his 1860 remarks to the House of Representatives in which he claims even a fanatic abolitionist “recoils in disgust and loathing from the prospect of intermingling the quick and jealous blood of the European with the putrid stream of African barbarism.”

It doesn’t stop there. Even in a speech lauding Jews as “wondrous kinsmen” and “our spiritual fathers,” Vance defaults to hoary stereotypes of “Jewish money-kings” and praises Jews as especially talented with figures. One bizarre passage compares the Jew’s torso size to that of “the Negro” and “the European,” though Vance doesn’t know what to make of the differences he perceives.

As to why Vance wrote the speech, one reason might lie in his membership in the Masons, a group that readily accepted Jews. Another, Rogoff says, may have been the Confederacy’s view of itself as suffering Israelites. In this trope, the Confederates cast themselves as Israel, escaping the “pharaoh” Lincoln and his tyranny of oppression, even as they defend slavery.

In 1876, Vance won back his old job as governor of North Carolina. That sent a message to anyone in the state who might support racial equality.

“What a powerful symbol,” said Tom Hanchett, a community historian in Charlotte. “The rebels of the Confederacy are coming back into power, their ‘rightful’ place.”

Bringing back as much of the old system as possible was the instinctive response of defeated Confederates, adds Harry Watson, a professor of history at the University of North Carolina at Chapel Hill.

“If you couldn’t hang onto slavery, the idea was to reinvent white supremacy so that it existed without actual enslavement,” Watson said.

Three years later, Vance was elected to the Senate, where he served until his death in 1894.

There was no mention of his passing in the Jewish press. The Vance Monument was dedicated in Asheville in 1897. The following year, North Carolina was host to the only armed coup d’etat in U.S. history when white residents in Wilmington overthrew a democratically elected, biracial government.

The bloody frenzy had been planned for months. White insurrectionists forced Black leaders and their allies to flee the city. They shot into Black residents’ homes. They burned down the local Black-owned newspaper office. It’s believed that some 60 people were murdered, possibly more.

Some Jews sympathized with their Black neighbors, but others took the side of terror. Nathaniel Jacobi, a merchant, and Solomon Fishblate, a former Wilmington mayor, signed a “Declaration of White Independence” and egged on a horde at a public meeting about the need for whites to control the city. Fishblate, according to one account, helped burn down the Black newspaper.

“The Scattered Nation” was reprinted in 1904 and again in 1916, bringing fresh attention to Vance in the Jewish community. Philanthropist Nathan Straus, co-owner of the Macy’s department store chain, funded an annual wreath laying and a wrought iron fence at the Vance Monument.

Jews covered the costs for a bronze plaque at the monument site in 1938 and were among the donors for the monument’s restoration in the 1990s. In 2015, funds were raised again for monument repairs.

But there was also a group of “Jewish people and non-Jewish people, Blacks and whites, saying this thing shouldn’t be rehabbed, it should be taken down,” recalled Deborah Miles, founder of the Center for Diversity Education at the University of North Carolina at Asheville and a co-leader of the Vance Monument task force.

Other memorials to Vance remain. A statue sits outside the state Capitol in Raleigh and, like the Asheville monument, it’s also been honored by B’nai Brith and the Asheville United Daughters of the Confederacy. Another statue sits in the National Statuary Hall Collection at the U.S. Capitol, given by the state of North Carolina in 1916.

Asheville Mayor Esther Manheimer, who is Jewish, voted for the removal of her local monument. She cited public safety as one reason: Some opponents vandalized the monument, others threatened to topple it.

Beyond that, Manheimer believes the monument no longer embodies the values of her city of some 93,000 residents, including the white population.

“I think we’ve come to a place where we are, as a city, more inclusive and mindful of the viewpoints of everyone in our community,” she said.

The mayor hopes the new downtown centerpiece will reflect what Ashesville is today. The community will go through a “visioning” process to determine what should replace the obelisk.

Manheimer said her experience as a Jewish woman influenced her deliberations, asking “What if there was some well-known anti-Semite who was honored in the heart of my downtown?”

The Confederate governor who loved Jews: A monument to Zebulon Vance is coming down in Asheville, NC