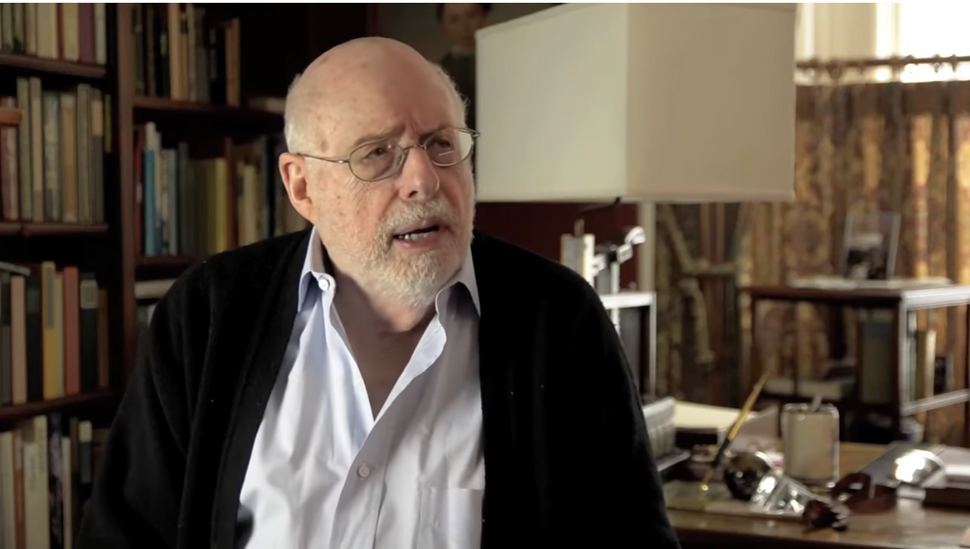 When Rabbi Robert Marx died last week at his Michigan home at the age of 93, he left behind a history of social justice activism in Chicago.

It began in 1966, when he watched Rev. Martin Luther King, Jr. lead a march through a hostile white neighborhood on Chicago’s Southwest Side.

“What I saw in Gage Park seared my soul,” he wrote in a letter to the Union of American Hebrew Congregations (UAHC). “I saw how the concentration camp could have occurred, and how men’s hatred could lead them to kill. I was on the wrong side of the street. I should have been with the marchers. It is not enough for me to say that Christians of good will should have been with my people in the concentration camps. … This time I will be on the right side of the street.” 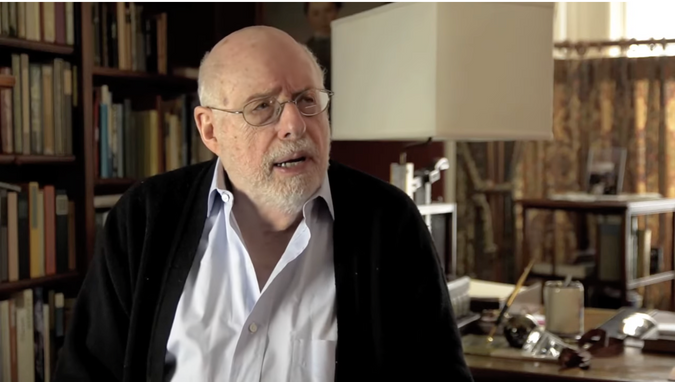 Marx followed King that day into a hail of rocks and bottles that hit King in the head. And he never stopped marching. For nearly half a century he was a central figure in social justice circles and a powerful moral force who helped shape the progressive landscape of Chicago and beyond.

“He was hugely influential in planting the seeds for the entire Jewish social justice movement nationally,” said Judy Levey, executive director of the Jewish Council on Urban Affairs, which Marx founded in 1964.

“He was a rare pearl in the human rights struggle in America and the world,” said the Rev. Jesse Jackson, who marched alongside Marx for years. “He was an activist and a scholar. He had courage; he put his body on the line. I loved him so much.” 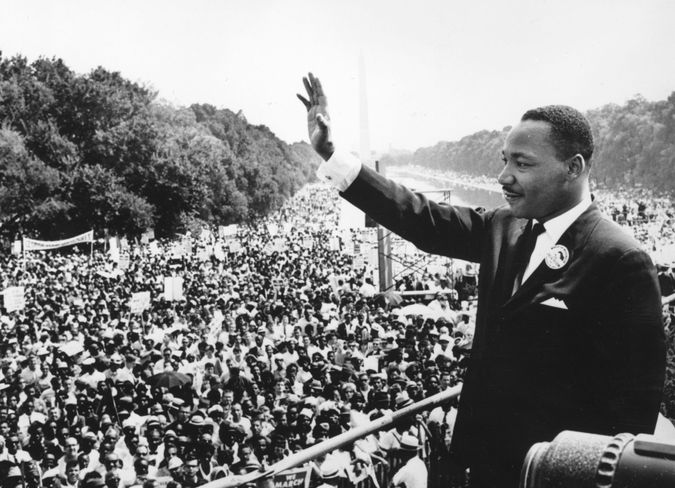 Even a partial list of the organizations Marx created or led is staggering.

“This was his MO,” said Rabbi Bruce Elder, who worked at JCUA in the 1980s and is now rabbi of Congregation Hakafa, the social justice-based synagogue Marx established. “He found places where a moral voice was lacking, and through sheer grit, determination, and cooperation, found the people to connect and created something that was lasting.” 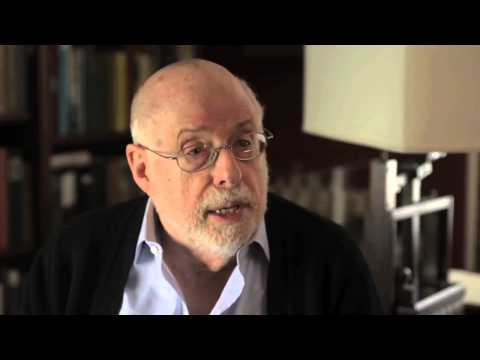 Though his activism began in another century, it is strikingly relevant today.

Decades before progressives were talking about intersectionality, Marx saw that racism was connected to antisemitism, that poverty was its breeding ground, and that working together with other communities addressed both.

Today’s white activists are focusing on serving as allies to communities of color. Marx was doing so more than 50 years ago.

“He understood that it was our role to listen,” said Jane Ramsey, a protege of Marx’s and executive director of the JCUA from 1982 to 2012. “We never went into a community unless we were invited.”

The rise and fury of white supremacy have shocked some in recent years. But Marx had seen it years earlier, from Selma to Chicago’s Southwest Side.

To counter hate, he nurtured dialogue. Marx was a founder of Chicago’s Catholic-Jewish Dialogue, which has been meeting for more than 50 years, and a co-convener with Ramsey of the Black-Jewish Dialogue.

“He reconciled Blacks and Jews,” said Jackson, to whom Marx reached out amid uproar when Jackson referred to New York City as “Hymietown” during his 1984 presidential bid. “He understood the importance of maintaining the relationship. When there were misunderstandings, he counseled me.”

After growing up in Cleveland, Marx was ordained by the Hebrew Union College in Cincinnati and moved to Chicago to head the regional office of the UAHC, the forerunner to the Union for Reform Judaism (URJ).

Underpinning Marx’s activism, said Rabbi Elder, were the words from Isaiah read from the bimah on Yom Kippur: ”Is not this the fast I desire – to break the bonds of injustice and remove the heavy yoke to let the oppressed go free and release all those enslaved?”

“He thought we should be living that,” Elder said.

Marx, who held a PhD in philosophy from Yale University, also developed a philosophy of why Jews are uniquely suited, and obligated, to work for justice.

Jew are an “interstitial people,” he wrote in his 2014 book, “The People in Between: The Paradox of Jewish Interstitiality” – neither inside the power structure nor among the oppressed groups completely outside.

Jews have frequently been used by the elites for tasks like collecting taxes, and have become targets for resentment. But this in-between status is also an opportunity, Marx wrote. Jews can – and should – refuse the middleman role and instead side with the oppressed against the true power-holders. This would be the right moral stand – and would also be a bulwark against antisemitism.

“He broke down barriers so communities that otherwise wouldn’t know Jewish people… would have a greater understanding of Jews and Jewish culture,” said Levey.

One of his most controversial stands, earning him opposition from some fellow Jews, was his support of the Contract Buyers League.

Contract buying was a ruinous arrangement Black people were forced into if they wanted to buy a home. Denied conventional bank mortgages through redlining, they had to buy on contract – an installment plan in which they paid the seller directly every month but never built equity or won title to the home until the very last payment. They could be evicted if they missed a single payment, losing everything they had paid.

In 1968, they fought back by forming the Contract Buyers League. They held marches, withheld their payments, and were evicted en masse, sparking clashes with police and sheriff’s deputies carrying out the evictions.

The conflict was particularly troubling for Jews. Much of the contract selling took place in the Jewish neighborhood of Lawndale, where residents were being frightened by panic-peddling real estate agents into selling their houses, often below value. Speculators were snapping up the houses and reselling them to Black families, on contract and for two and three times what they had paid. Many of these sellers were Jewish.

Rabbi Marx and the JCUA supported the Black home buyers – visibly and physically.

“He didn’t just sit inside and write articles; he was out there helping people move their furniture back in their houses when they were evicted,” said Beryl Satter, a Rutgers University historian whose book,“Family Properties: How the Struggle over Race and Real Estate Transformed Chicago and Urban America,” tells the story of the Contract Buyers League.

Marx and Catholic activist Monsignor John Egan were among those sued for $1 million for defamation by the contract sellers. The suit was later thrown out of court, but Judge Hubert L. Will, the federal judge overseeing the federal lawsuits in the battle, had already separated Marx and Egan from it, ruling that they had no standing.

Marx was angry, recalls Nikki Will Stein, the judge’s daughter, who worked for several years at the JCUA and became a longtime board member. “He wanted to be part of making the statement,” she said. “He’s probably one of the very few people who felt he’d been badly served by being thrown out of a lawsuit.”

The battle divided the Jewish community.

The Jewish establishment were furious at him, he told the Chicago Tribune in 1999, because the sellers were threatening to withdraw their contributions to Jewish organizations.

“It created a lot of conflict,” said Satter.

Marx was forced out of his Chicago position with the UAHC and made regional director in New York. He returned to Chicago in 1973 and became rabbi of Congregation Solel in Highland Park. In 1983, he melded his social justice passion with his pastoral work, founding and becoming rabbi of Congregation Hakafa.

For all his role as a towering figure in Chicago activism, Marx was not personally towering.

“He was this short, nebbishy-looking guy,” said Nikki Will Stein, who worked at the JCUA for several years and served on its board for decades. “He was as far from looking like a street fighter as you could get.”

He was both fierce and kind, said Martin Deppe, a retired United Methodist Church pastor who marched alongside Marx, and played chess with him, for years. “He was a gentle man. par excellence. But alongside that gentleness was this anger – righteous anger over injustice of any kind.”

Marx’s gentle side served him well both as a peacemaker and as a rabbi. When his 15-year-old son, David, died in 1973 after a long illness, Marx co-authored a book, “Facing the Ultimate Loss,” for grieving parents, and convened a support group that he led for years.

In recent years, Marx and the JCUA protested working conditions at a kosher slaughterhouse in Postville, Iowa, and supported Chicago’s Muslim community in the wake of post-9/11 anti-Muslim sentiment. After retiring, Marx and his second wife, Ruth, moved to Saugatuck, MI, where they welcomed visitors and hosted Congregation Hakafa retreats.

Marx died at his Michigan home, surrounded by family, according to a statement. He is survived by his wife; one son from his first marriage; five stepchildren from his second marriage; and 17 grandchildren.

His historic 1966 letter is reproduced, along with his image, on a memorial to King in Marquette Park, site of that tumultuous march.

But his true legacy, Levey said, is the one heading into the future.

“He did march with Martin Luther King in Marquette Park, but he felt that that was just a moment,” she said. “What he was really proud of was the partners and the work and the impact over a long period of time.”