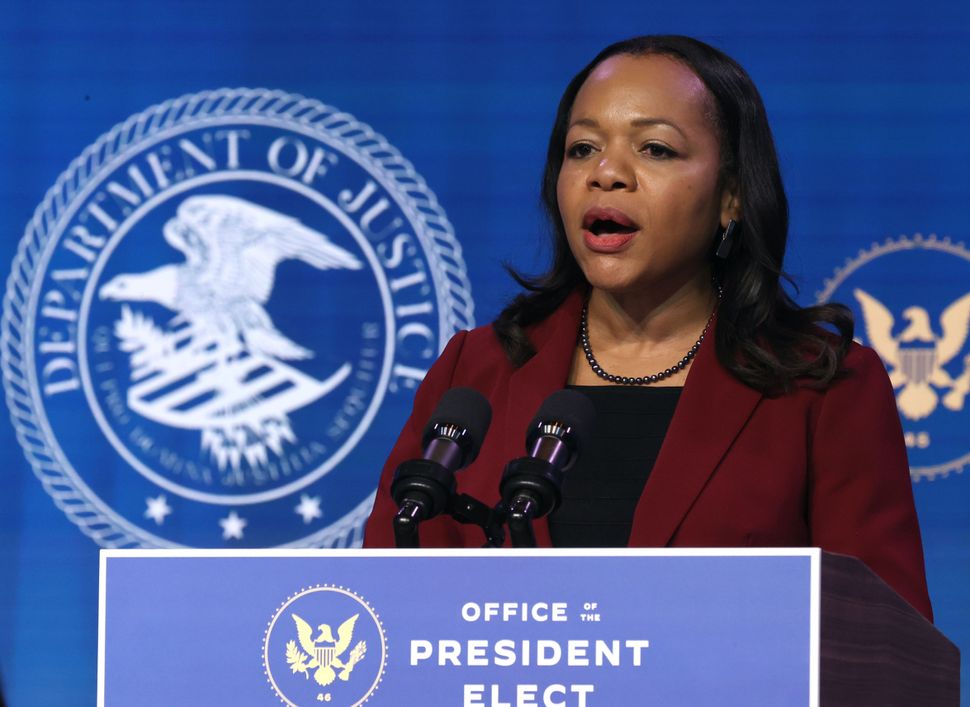 In a rare public statement on a political appointment, the Jewish Council for Public Affairs called out misleading allegations of antisemitism leveled against Kristen Clarke, President Joe Biden’s nominee to lead the Civil Rights Division of the Department of Justice. In a letter sent to members of the Senate Judiciary Committee earlier this week, the Jewish umbrella group urged the Senate to consider her nomination based on her record of fighting antisemitism and promoting civil rights.

Clarke’s confirmation hearing is scheduled for next Wednesday.

Last month, Sen. Mike Lee, a Republican from Utah, drew attention to past comments made by Clarke – which were recently featured on conservative news websites – about racial superiority and highlighted her role in organizing a 1994 event while at Harvard University that featured antisemitic comments by a controversial professor. In an interview with the Forward following her appointment in January, Clarke said it “was a mistake” to have hosted the professor, and that her comments had been “twisted.”

JCPA, the national network of 125 Jewish Community Relation Councils and 16 affiliated agencies across the nation, recently hosted Clarke for a virtual meeting with its board of directors and Jewish leaders. During the meeting, Clarke highlighted her past work on civil rights and fighting religious discrimination.

Clarke, who is president of the Lawyers’ Committee for Civil Rights Under Law, previously headed the civil rights bureau at New York Attorney General Eric Schneiderman’s office from 2011 to 2015. During her tenure there, Clarke spearheaded a religious-rights initiative that promoted religious accommodation and ensured that Jewish employees were given flexibility so that they could observe the Sabbath and other holy days. She also worked with the JCPA on voting rights as an attorney at the NAACP Legal Defense Fund.

“After reviewing the entirety of Ms. Clarke’s professional career fighting for civil rights and against hate, JCPA considers attempts to focus on purported antisemitism during her confirmation process to be inappropriate, pretextual, and baseless,” the group wrote in the letter. “As a national organization representing a wide diversity of the organized Jewish community, we urge the Senate to consider her confirmation based on her career and actual record of leadership and not based upon these unfounded charges of antisemitism.”

Tammy Gilden, a JCPA spokesperson, told the Forward that while the statement is not an endorsement of Clarke’s nomination, the group felt it was necessary to push back against those questioning her character. “Having worked with her for so many years, we felt that it was necessary for us to come out publicly and to make sure that the committee and the Senate is aware that we believe as a mainstream Jewish organization that these claims are not credible,” Gilden said.

Amy Spitalnick, who was communications director and a senior policy adviser to the AG, said that Clarke left lasting impacts that drove the attorney general’s office going forward. “Oftentimes, you need to recognize the power of the office to identify ways in which you can really go above and beyond in protecting people’s rights,” she said. “That is something that Clarke did and that clearly has informed the bureau’s work long after she left.”

David Pollock, associate executive director of the Jewish Community Relations Council of New York, said that Clarke maintained a good working relationship with the group, including on the redistricting process in 2012. “Every interaction we had was positive,” he said.

The JCPA letter comes after dozens of Jewish organizations – including the Anti-Defamation League, American Jewish Congress, the National Council of Jewish Women, the Religious Action Center of Reform Judaism – had already expressed support for her nomination. JCPA’s national member agencies include the Orthodox Union and B’nai Brith.

“The use of antisemitism as a pretext for baseless smears against Kristen Clarke is not an isolated incident,” said Halie Soifer, chief executive of the Jewish Democratic Council of America. “It is part of a larger trend of the GOP’s racist attacks targeting Biden appointees and nominees, especially women of color and other minorities. Jewish Americans see through this cynical politicking and strongly support Ms. Clarke’s nomination because she’s eminently qualified and committed to fighting the very forms of hatred she’s being falsely accused of.”

The National Council of Jewish Women recently launched an action alert for supporters to lobby senators to confirm Clarke’s nomination, as well as the nomination of Vanita Gupta as associate attorney general.

Spitalnick, who now directs Integrity First for America, a group that litigates against white supremacists, said in an interview that she and a number of her former colleagues at the attorney general’s office are constantly communicating via email and text about rallying support for Clarke. “It’s not an accident that so many in the Jewish community, from across the political spectrum in many ways, have rallied around Clarke,” Spitalnick said. “We have worked with her in a variety of ways and know firsthand her commitment to fighting antisemitism and extremism; to protecting people’s civil rights, including in the Jewish community, and understand the importance of having someone like her who truly gets it in this role at such a crucial moment.”