Was Cuomo’s expletive comments about Sukkot a slip of the tongue or something more? 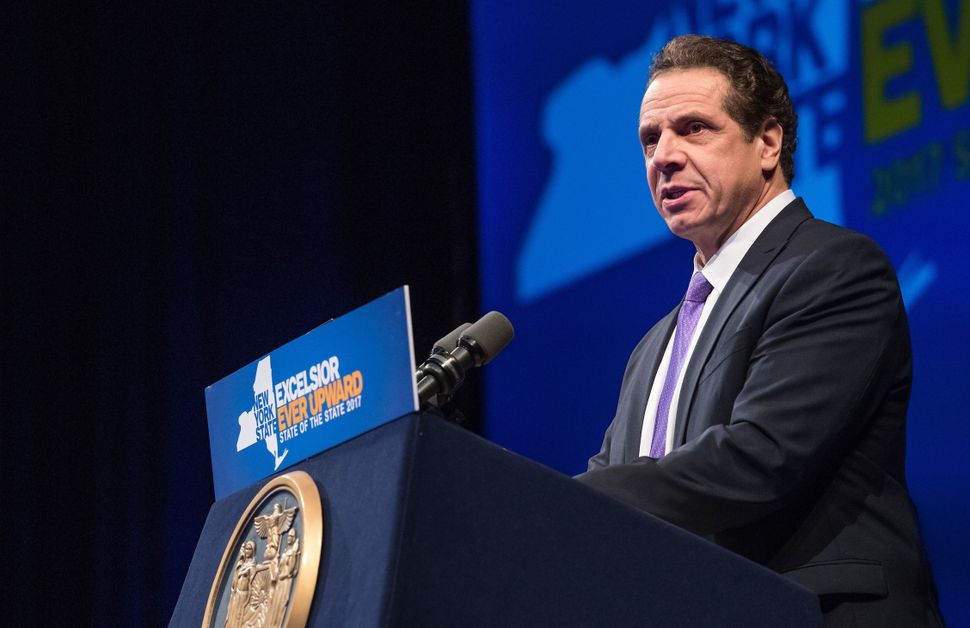 Demeaning comments made in private by New York Governor Andrew Cuomo earlier in his political career about the festival of Sukkot raised some eyebrows in the Jewish community on Tuesday.

In an extensive profile of Cuomo in the New York TImes Magazine, journalist Matt Flegenheimer reported that during the 2006 campaign for attorney general, Cuomo expressed frustration that he had to attend a Jewish outreach event during Sukkot. “These people and their f***ing tree houses,” Cuomo said at the time, according to two unnamed sources.

The sukkah, built as a temporary hut outdoors, is a tribute to both the temporary structures built by ancient field laborers and the hardships the Israelites endured as they wandered through the desert after the exodus from Egypt.

“The governor’s two sisters married Jewish men and he has the highest respect for Jewish traditions,” the spokesperson told the Forward.

The three-term governor, who is facing calls to resign amid sexual harassment and misconduct allegations, has had a complicated relationship with the Jewish community in New York.

During his three successful campaigns for governor, Cuomo won a majority of the Jewish vote. In his re-election campaign in 2014, Cuomo even did better in districts with significant Orthodox populations than in predominantly non-Jewish neighborhoods of New York City.

Hank Sheinkopf, a Democratic campaign consultant, said that while Cuomo may be thin-skinned, it is hard to believe that he would say something offensive about a Jewish festival like these alleged 2006 comments.

It’s not clear whether Cuomo had a formal Jewish outreach team in that race, but Cuomo has been known for becoming irritated by campaign events in small or limited settings.

During the 2018 gubernatorial campaign, Cuomo poked fun at Sheinkopf’s “ugly” dance moves during remarks at a Black church. Sheinkopf, who has worked on hundreds of local races in New York, noted that there’s a difference between remarks supposedly said during a campaign compared to Cuomo’s actions while in office.

“To accuse him of being an antisemite, I think is just unfair,” Sheinkopf said, mentioning the governor’s executive order against the Boycott, Divestment and Sanctions movement, his trips to Israel in recent years, and action combating antisemitism. “To accuse him of saying something that is demeaning to Jews in that way wouldn’t be correct.”

The Forward spoke to multiple former aides and local Jewish leaders who declined to go on the record to speak about the incumbent’s remarks. But several people speaking on the condition of anonymity said that the Sukkot comments don’t sound like anything they have ever heard the governor say in private. One of them pointed out that Cuomo placed a mezuzah – made by the students of HAFTR in 2018 – outside the Governor’s mansion in Albany.

“To be fair to the governor, I have seen him and spoke to him at dozens of events – many Jewish – and have never heard him say anything disparaging about Jews,” said David Greenfield, CEO of the Met Council. Greenfield, a former councilman from Brooklyn, hosted an annual sukkah party for elected officials when he was in office.

Rabbi Joe Potasnik, executive vice president of the New York Board of Rabbis, said in an interview that one should measure belief by behavior. “Show me what a person does and then I’ll tell you what kind of person he is,” Potasnik said. “The governor that I have seen is one who’s traveled to Israel during a very dangerous time; is one who stood up for the Jewish community as antisemitism was increasing; and is one who has always stood with our people.”

Last year, Cuomo drew backlash from Orthodox leaders over his executive order limiting attendance at houses of worship following an uptick in COVID-19 cases in some neighborhoods in Brooklyn and Queens.

Rabbi Chanina Sperlin, head of governmental affairs for the Crown Heights Community Jewish Council, said that unlike his father, Mario Cuomo, the governor has not proven to be a close friend of the Orthodox community. Sperlin, who has hosted statewide elected officials for an annual event during the holiday of Sukkot since 1998 – including a limited socially-distanced event last year – said Cuomo never responded to an invitation to attend his sukkah celebration.

“In all of the years he’s served as governor, Cuomo never visited the Crown Heights community, despite being invited to come at least once a year, if not more,” Sperlin said. The only time Cuomo came, he noted, was in 2017 when he visited the Jewish Children’s Museum in Brooklyn after a bomb threat. Cuomo had been at another event nearby.

Was Cuomo’s expletive comments about Sukkot a slip of the tongue or something more?