Henderson, Nev., has a growing Jewish population. Here’s what locals love about living Jewishly in the desert. 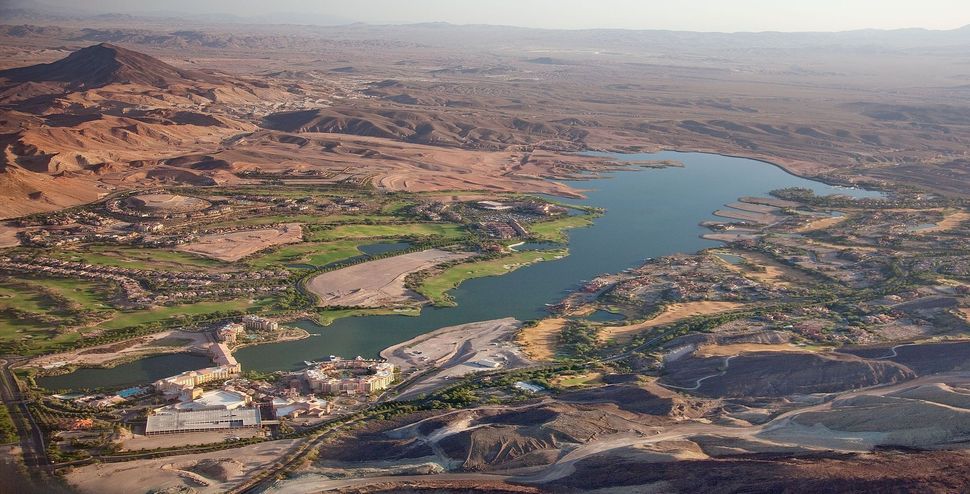 HENDERSON, Nev. (JTA) — Gershon and Leslie Wolf relocated from Brooklyn to Las Vegas in August 2006, then returned to the East Coast in 2010 to join their son and daughter and their families. But four years later, when the kids decided they’d had enough of the high prices, snowstorms and weeklong power outages, the whole clan moved back to Nevada.

Only this time the Wolfs opted for neighboring Henderson, mainly because they wanted to be near the Yeshiva Day School of Las Vegas, “so the kids wouldn’t have to commute to school,” Leslie Wolf said. “We’ve never looked back. We all love the life here.”

If Las Vegas is known as a place to have fun, its next-door neighbor Henderson — Nevada’s second-largest city — has become a prime destination for Jewish families. Some 40% of the approximately 70,000 Jews who live in the Las Vegas Valley reside in Henderson, according to the most recent demographic survey by Jewish Nevada, the representative organization for the Jewish federation. A steady trickle of newly arriving families every summer has propelled what was a sleepy suburb to an emerging hub of Orthodox Jewish life in the desert.

In the shadow of Sin City sits a haven for Jews who, with few exceptions, all made the move from somewhere else.

Henderson has peeled off Jews from New York and California, who are drawn to the low housing costs, abundance of parks and trails, and lack of snow. But it’s the well-developed infrastructure of observant Jewish life that’s the real draw: the thriving minyans, supermarkets with kosher sections, summer camps, kosher restaurants, religious schools, a kosher butcher, mikvahs and a Jewish cemetery. A religious boundary known as an eruv is bursting at its seams, and an expansion effort is underway.

“We love it,” gushes Simon Lader, a corporate headhunter who relocated from England seven years ago. “Coming from Manchester we love the weather, the landscape, the dry heat and blue skies. We also love how warm and close the community is. It has grown exponentially since we first arrived. However, it has retained the ‘village’ culture where everyone still looks out for each other.”

The city does not yet have everything that some community members want — but even when people move on, the village culture persists. The community was rocked this year when Bashi Rand, a 37-year-old former resident who had just moved with her family to New Jersey, in part to seek a larger Orthodox high school for her daughter, died of COVID-19 complications.

Rand’s death sent many in Henderson into mourning. Her funeral was viewed virtually in Henderson by longtime friends. An online fundraising campaign launched on behalf of the family has raised more than $760,000. While it helped provide closure, it didn’t relieve the pain.

“It was very tragic,” said Sy Ader, a retired engineer who arrived in Henderson in 1996 before much of the city had been built. Ader remembered Rand not only as someone who was always there for others, but as “a very funny girl with a subtle sense of humor.”

“Aside from her loss, it really hit home to everyone because this was the first loss in our community,” he said. “It was a reality check on how precious life is.”

Rand’s family represented a relatively rare occurrence. While Henderson has four synagogues – mainstream Orthodox, Chabad, Conservative and Reform – running the gamut of contemporary American Jewish life, it’s the local Orthodox community that has seen the most dramatic growth from its beginnings a quarter-century ago with a Chabad emissary.

Henderson, which was incorporated in 1953, saw its population expand rapidly beginning in the 1990s, quintupling over the past 30 years to its current 320,000-plus. The first Chabad emissary had arrived in the mid-’90s. The Orthodox presence grew further with the arrival of Rabbi Yehoshua Fromowitz in the summer of 2008 to form a kollel (yeshiva for married men). Three years later he founded the Ahavas Torah Center, an Orthodox synagogue.

Unlike in some other expanding Orthodox-dominated suburbs, such as Lakewood, New Jersey, the Jews of Henderson don’t necessarily see their proximity to a big city as an advantage. Being a stone’s throw from the legendary Vegas Strip “definitely created some challenges in terms of spiritual growth,” Fromowitz said.

“But for the most part,” he added, “the community remains isolated from the entertainment capital of the world — or so we hope.”

Rabbi Bradley Tecktiel of Midbar Kodesh Temple, a Conservative congregation, considers Henderson unique in that “you can live here and avoid the common vices normally associated with Las Vegas.”

“The Strip and all that it offers is there for those who want to take advantage of it,” he said. “However, you can live in Henderson and not even know it exists. As a master-planned community there is a park within a mile walk of any home.”

For some in the community, having Las Vegas nearby offers something of a beacon when it comes to maintaining Orthodox values in Henderson.

“Every city has its places to go and places to avoid, but they are all interlaced and it’s hard to know where to steer clear of,” Lader said. “With Vegas only a few miles away, we know that all the tumah [impurity] is concentrated in one specific area, and it’s lit up and visible for miles around, so it’s very obvious where to avoid.”

Others say the Strip allows for employment opportunities, even if the content is not totally palatable for Orthodox workers.

“Look, you grin and bear it,” said one Orthodox local who had worked at the Egypt-themed Luxor resort on the Strip and asked not to be named for fear of societal pressure. “Earning a living for one’s family is a righteous endeavor, and bottom line we’re still in golus [exile]. You make the best of things.”

Many have made that determination. The Yeshiva Day School of Las Vegas is now located in Henderson and has 200 students, enough to have outgrown the school’s physical space — it leases additional space from the local Reform congregation, Ner Tamid. And preliminary plans are in motion to expand the city’s eruv eastward to encompass more apartment communities. Consultation with rabbinic experts is already underway.

“People in Henderson, Jews and gentiles alike, are generally nice,” said Howard Perlman, president and founder of Perlman Architects. His firm designed developments in the city that cater to observant Jews, including housing units that surround the three synagogues and a local assisted living facility with a kosher kitchen.

“I have found over the years that the gentile community we’re integrated with accepts and likes us,” Perlman said. “Even the city government went out of its way to help us with our eruv and traffic control on Shabbat and holidays.”

Like many Jewish communities, Henderson is reeling from the effects of the COVID-19 pandemic.

“COVID had a huge impact on our community,” said Ahavas Torah Center’s Rabbi Zecharia Rubin, who relocated with his family from Jerusalem. “Many people have been home and stayed away from shul and other gatherings, even with social distancing in effect. I am confident it will get back to normal, but it will take time.”

When the pandemic struck, the community, like so many others, had to pivot to virtual events. Shuls shut down for months, then moved outdoors, adopted all regulations such as providing face masks and hand sanitizers, and socially distancing, suspended the weekly kiddush (the repast following Shabbat services) and curtailed all social events.

“The strong base that we have created allows for people to move here and seamlessly integrate into the Jewish community,” he said.

Locals await the addition of fresh-made food items for takeout or even on-premise consumption by the newly arrived kosher butcher Prime Nosh, which opened in 2018. The charitable organization founded by the Wolfs shortly after they arrived, Aishel Avraham — similar to one theyah’d operated back in New York — now delivers free Shabbat food bundles to 80 financially stressed families across the area, and its scope is growing.

Rubin said the pandemic had made Henderson attractive to even more potential Jewish residents than before.

“Jews in big cities are looking to get out,” Rubin said, “and when they see Henderson they find the perfect place to come to. … There simply aren’t enough homes available within the eruv to accommodate the families interested in moving here.”

Henderson, Nev., has a growing Jewish population. Here’s what locals love about living Jewishly in the desert.