In Yemen, antisemitism is rampant even though few Jews actually live there 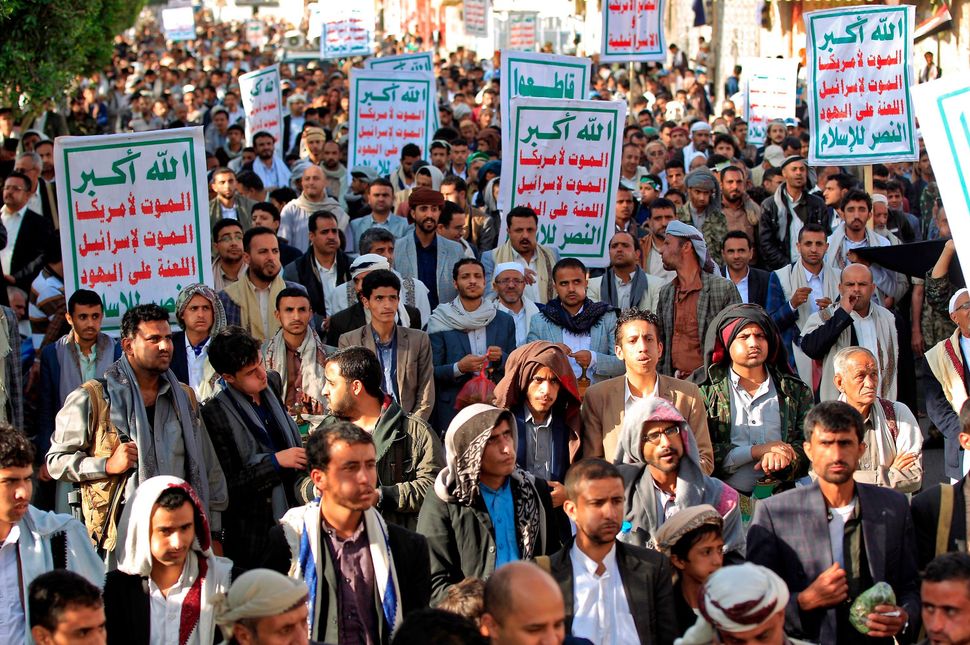 “Death to America. Death to Israel. A curse upon the Jews. Victory to Islam,” reads the banner of the Ansar Allah — the Partisans of God — more commonly known as Yemen’s Houthi militia.

The Iranian-backed force, which has been embroiled in a six-year civil war for the control of Yemen, has often taken it upon themselves to be that curse.

Last month, the Houthis succeeded in expelling nearly all of the last remaining Jews in Yemen.

At the demand of the group, 13 Jews – all members of a single family – were exiled from Yemen and relocated to Egypt. It’s far from the only such story; earlier this year two other Yemeni Jewish families were transferred from the country to the United Arab Emirates. Only six elderly Jewish men are estimated to remain in the country.

The Houthis’ actions have all but put an end to more than 2,000 years of Jewish history in the region. However, whatever Jewish life did remain in Yemen before the rise of Houthis is an epilogue to the storied Jewish community that once numbered more than 50,000.

Most of those Jews were airlifted to Israel in the 1950s as part of Operation Magic Carpet, and today nearly half a million Israelis are of Yemeni descent.

So why has the Houthi movement had such an obsession with persecuting the last handful of Yemen’s Jews, when most of the country has been devoid of Jews for decades?

According to Mohammed Al Samawi, a Yemeni national and interfaith activist who had to flee the country after the Houthi takeover of his native city of Sanaa, antisemitism is nothing new in Yemen – but the Houthis have taken it to a new level.

The history of the Houthis

Educated in Iran, al-Houthi started agitating against Yemeni Jewish communities long before the breakout of the civil war in 2015. Hussein al-Houthi was killed in 2004. Since then, the group has been led by his brother, Abdul-Malik, but Hussein’s teachings are still a big part of their ideology.

According to a report released by the U.S. Embassy of the Republic of Yemen, who remain the internationally recognized government of the war-torn nation, hatred of Jews is an essential facet of the Houthis’ ideology. The report states that al-Houthi’s teachings make clear one message: that Jews are the enemies of Yemen.

“Arab countries and all Islamic countries will not be safe from Jews except through their eradication and the elimination of their entity,” al-Houthi wrote in one of his publications.

Al Samawi believes Jews were simply used as a pawn by Yemen. When the Jews fleeing Sa’dah arrived in Sanaa, Yemen’s president at the time, Ali Abdullah Saleh, appealed to the U.S. for funding to help keep them safe – and then pocketed the money. All the while, Yemeni Jews were generally barred from government jobs and enrolling at universities.

“The Jews had their own battle, and the government was happy with that. They never wanted Muslim Yemenis to interface with Jews,” Al Samawi said. “They never wanted them to be part of Yemeni society. When the Houthis came, it wasn’t a new message – just a more extreme one.”

That message is clear not just in al-Houthi’s speeches, but also in the curriculum under which school children are educated in Houthi controlled regions.

“Jews are subject to such a disproportionate focus, as unique enemies of Yemen, the people of Yemen and of Islam,” explained Marcus Sheff, CEO of the Institute for Monitoring Peace and Cultural Tolerance in School Education, which studies the Houthis’ curriculum. “It’s persistent, there’s no apology for it.”

The irony is that the chance the average Yemeni child would ever actually meet a Jew is incredibly slim.

“At the end of the day, you have this movement whose antisemitism is genocidal, in a place where practically no Jews exist any more and neither Jews nor the Jewish state have any influence,” Sheff said. “Yet, you have this outsized obsessional hatred toward them.”

In Yemen, antisemitism is rampant even though few Jews actually live there