What does peyote have to do with pandemic minyans? 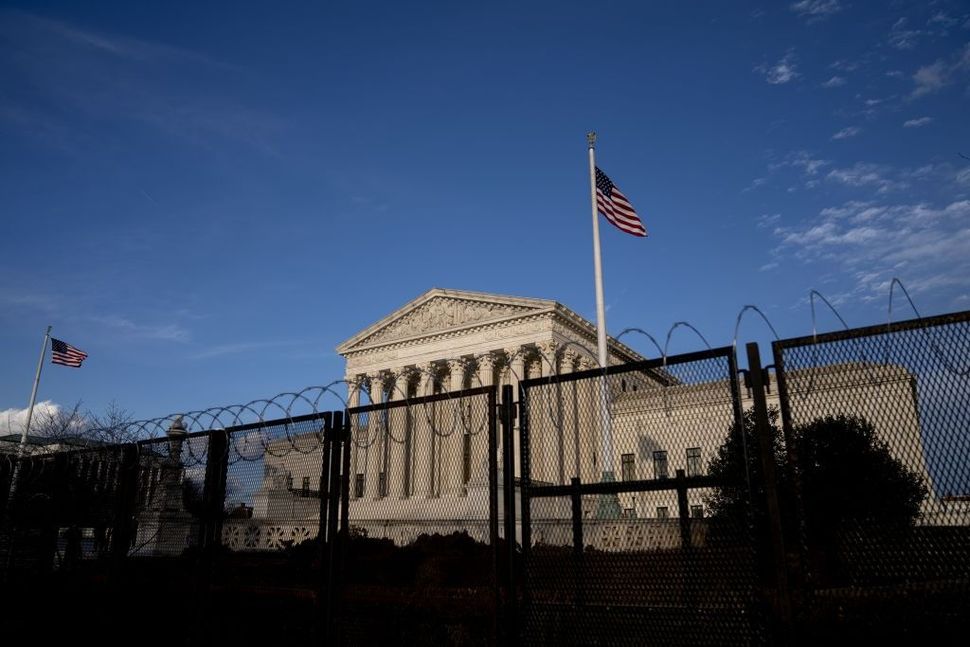 The Supreme Court of the United States. Courtesy of Getty Images

When I lived in Boston, much of my Jewish life took place in people’s living rooms and kitchens; though I also had a synagogue I loved, most of the young, engaged Jews of Somerville orbited through various monthly gatherings of egalitarian minyans and niggun singing and Shabbat meals. The coronavirus has decimated this aspect of Jewish community. But now, according to a new Supreme Court ruling, these gatherings can legally start up again. And the whole argument hinges on a court case about peyote — yes, the hallucinogenic drug.

The case was brought in California, where in-home gatherings of any variety were limited to three households due to the pandemic. Rev. Jeremy Wong and Karen Busch of Santa Clara County brought the case, arguing that the limits infringed on their religious liberty. The case proceeded through the court system, with the limits upheld by a federal judge and a divided panel in the Ninth Circuit, until it arrived at the Supreme Court.

There, the tides turned, and on Friday, a 5-4 court ruled in favor of Wong and Busch, with an unsigned majority opinion. Chief Justice Roberts joined the three liberal justices — Elena Kagan, Sonia Sotomayor and Stephen G. Breyer — in dissenting.

The Supreme Court has batted around the question of whether the government can place limits on religious gatherings several times already since the pandemic began. The crux of the issue is whether religion merits special exemptions — or whether it is subject to the same laws as similar groups.

‘A neutral law of general applicability’

The precedent for this question was set two decades ago, when the Supreme Court ruled that religion did not deserve an exemption from laws that were generally applicable. This means that as long as a law does not treat religious activities more harshly than secular ones, it is upheld, even if it restricts the religious activity.

The case in question came about when two employees at a drug rehab facility were fired after they used peyote, and were denied unemployment benefits due to “misconduct.” They contested the ruling because they consumed the hallucinogen during a Native American religious ceremony in which peyote is traditional. The court did not grant a religious exemption because the law classifying peyote as an illegal drug was not drafted with the intention of targeting Native American religious observance.

This set the precedent of general applicability for government limits on religious activities. As long as the law that limits religious observance is broad, religion does not merit “strict scrutiny” or exemption — meaning, during the pandemic, general limits on gatherings 10 and over would be legal even if they happened to also restrict minyans.

In May and July, before Ruth Bader Ginsburg died, the Supreme Court took on two cases about the government’s right to restrict attendance at churches in California and Nevada respectively. Then, the court’s liberal wing was composed of four justices including Ginsburg; Chief Justice Roberts cast the deciding vote, affirming the government’s right to limit religious gatherings under the First Amendment.

The ruling argued that an equal or greater limit was also applied to secular activities such as salons and retail stores, so the law was generally applicable. Though there were exemptions allowing some secular businesses to continue to operate, the majority opinion stated that the exemptions — grocery stores and banks, for example — could be treated as a separate category.

However, this logic was rejected in November, after Justice Amy Coney Barrett replaced Ginsburg and shifted the court’s balance, strengthening its conservative majority. In this more recent case, brought by the Roman Catholic Diocese of Brooklyn and by two Orthodox synagogues after Governor Andrew Cuomo tightened restrictions in response to an uptick in COVID cases, the restrictions were shot down. Though the situation was similar to that in California in that secular businesses were also similarly limited, the court ruled that Cuomo’s limits violated the First Amendment’s protection of religion. 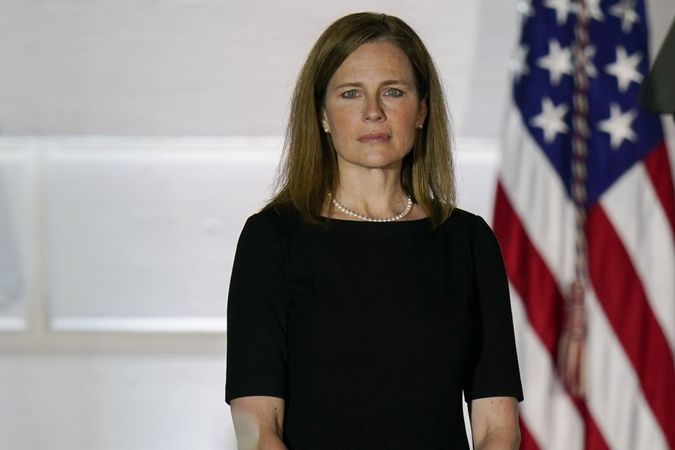 The California law limits gatherings of more than three households in private homes for any reason — birthday parties are just as forbidden as prayer circles or minyans. Indoor worship at churches and synagogues was limited to 25% capacity in high infection areas and 50% in lower ones. Singing and chanting, activities that spread more infectious aerosol droplets, were restricted.

Like many states, California is also allowing various secular, commercial activities such as hair salons and restaurants to open and perform their services, albeit with capacity limits and mask mandates, but without the three-household limit imposed on gatherings in private residences. The case contesting California’s limits argued that if commercial activities can carry on, why not religious — why should haircuts be favored over prayer?

The dissent, written by Kagan in favor of the government’s restrictions, argued that comparing hair salons and retail stores to private in-home gatherings was like comparing “apples and watermelons” because of the differences in behavior and social-distancing in commercial and private spaces.

But the majority opinion struck down the restrictions, arguing that “comparable secular activities” were treated “more favorably than at-home religious exercise.”

The ruling states:“Where the government permits other activities to proceed with precautions, it must show that the religious exercise at issue is more dangerous than those activities even when the same precautions are applied.” This means that commercial public activities can be compared to private religious gatherings, and must be treated equally.

As Evan Gerstmann observed in Forbes, this sets the precedent that strict scrutiny must be applied in the case of any exemptions, nearly always resulting in restrictions being struck down. Because there will always be exemptions to COVID restrictions — think hospitals and grocery stores — it will be difficult to restrict religious gathering.

This does not mean that in-home minyans or other religious gatherings are allowed to proceed as they did before, without masks and social distancing; theoretically, they are still subject to the same limits as businesses such as restaurants or stores, but these restrictions are nearly impossible to enforce in private homes.

This ruling also did not lift restrictions on other, secular gatherings in private homes, meaning that courts are now in the position of deciding what does and does not count as religious observance — birthday parties are not a constitutionally-protected right. But while some religious gatherings, such as minyans, are clearly protected under this ruling, other gatherings are murkier. What about weddings with a religiously-affiliated officiant and traditional ceremony? What about yoga?

As for the guys who took peyote? They’d be protected today.

What does peyote have to do with pandemic minyans?