Is Pudu Pudu Nazi pudding? How Dr. Oetker came to terms with its past 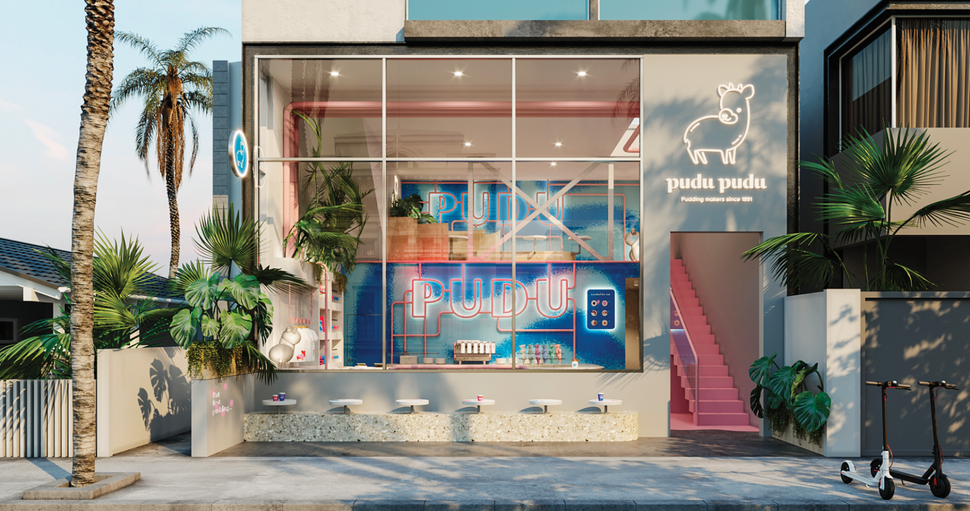 “In this neighborhood, you see signs on bars and restaurants that brag, ‘Since 2011,’” Goldblatt, a seven-year Silverlake resident, said. “It made me wonder, how is it possible that I’ve never heard of this hundred-year-old pudding company?”

To solve the mystery, Goldblatt hopped on the Pudu Pudu website, a slick and bubbly number featuring photos of elaborate bowls of pudding with elements such as edible fresh flowers and blue spirulina. Instead of vanilla and chocolate they offered, “Giggle in the Dark” and “Wow in the Wild.” Clicking on the About section, Goldblatt learned that the name of Pudu Pudu’s parent company was Dr. Oetker. And from there, it was a quick trip to Wikipedia where he was taken aback by information about the German corporation’s Nazi roots. Not only were two presidents of Dr. Oetker very active in the Nazi party, but the company also supplied Nazi troops with munitions, baking powder — and pudding mix.

Goldblatt saw that Pudu Pudu was setting up more locations on Abbot Kinney Boulevard in Venice and in Century City. He wondered: Was Nazi pudding coming to L.A.?

Any German can tell you that the Oetker Group is a megacorporation that produces frozen cheese pizzas, Black Forest cake mix, and scores of other prepared foods sold across the globe. Think of it as the Bavarian Pillsbury. 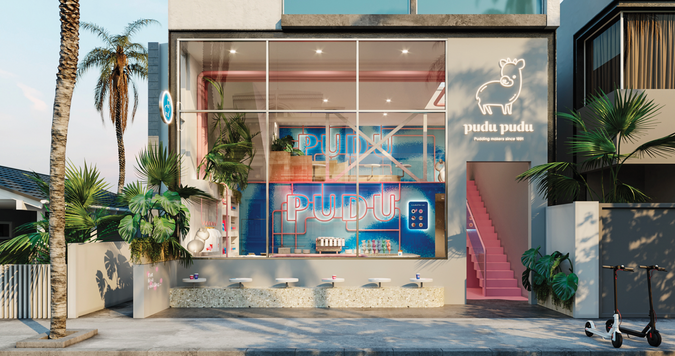 In 2008, the Oetker Group itself commissioned historian Andreas Wirsching and his team at the University of Augsburg to investigate and write a history of the corporation’s World War II record. The Oetker spokesperson who oversaw the project, Jörg Schillinger, told the Forward that with public speculation growing, the family took action as soon as its patriarch, Rudolf August Oetker, passed away.

Schillinger said the family gave the scholars “complete freedom and independence for their research, and whatever they would find out would be accepted by the family, even if it would be painful, and it was, indeed.” 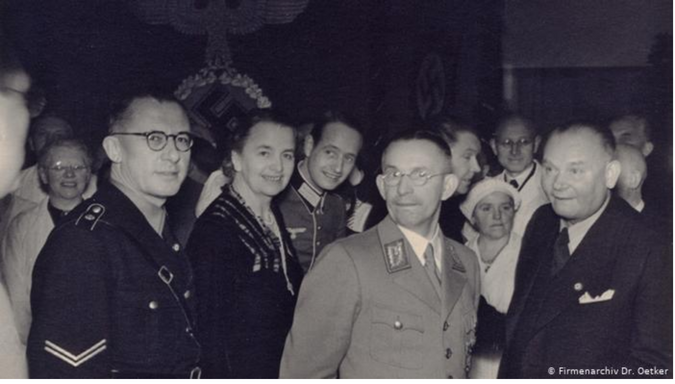 Once the 624-page document was completed in 2013, the company made it public.

The history is fraught. Dr. Oetker was founded in 1894 in the German city of Bielefield by a pharmacist named August Oetker, who is said to have been the first in Germany to sell longlasting baking powder and to package it, as well as pudding mix, into individual servings.

While he did not join the Nazi party, his successor did. Richard Kaselowsky was the stepfather of Oetker’s grandchildren, whose father had died in the battle of Verdun. As Kaselowsky helped grow and diversify the company, he joined the Nazi Party around the time Adolph Hitler became chancellor of Germany in 1933.

Subsequently, Kaselowsky became a member of Freundeskreis Reichsfuehrer SS, an association of businessmen and Nazi officials convened by Heinrich Himmler, who ran the Nazi’s paramilitary group (the SS) and was central to the organization of the Holocaust.

Kaselowsky made large donations to Himmler and, during World War II, supplied Nazi troops with Dr. Oetker’s powdered food products as well as grenades and machine gun parts from a Dr. Oetker subsidiary that exploited the labor of enslaved people.

In the meantime, the grandson of August Oetker, Rudolf August Oetker, was drafted into Hitler’s army and, in 1941, volunteered for the Waffen-SS, the military branch of the SS that patrolled concentration camps, participated in most major military campaigns, and perpetrated extensive war crimes.

Rudolf August trained for an administrative role in the SS at the immediate vicinity of the Dachau concentration camp. Historian Sven Keller, a co-author of the Oetker study, called Rudolf August’s choice an “ideological decision” when he spoke to the Irish Times in 2014. “You didn’t sign up for the Waffen-SS if you weren’t convinced that Nazism was the right thing.”

Rudolf August never came into active SS service because, at 28-years-old, he was called home in 1944 to run Dr. Oetker when his stepfather, Kaselowsky, his mother, and two stepsisters died in their home during an Allied bombing.

A year later, British forces arrested Rudolf August and held him in a prisoner camp until the denazification hearings. He was permitted, in 1947, to return to the family business.

Under his leadership, the company boomed into a multibillion dollar conglomerate. Not until 1981 did his eldest son, August Oetker, take over as general partner of the executive board. The patriarch, Rudolf August, remained head of the advisory board until his death in 2007. 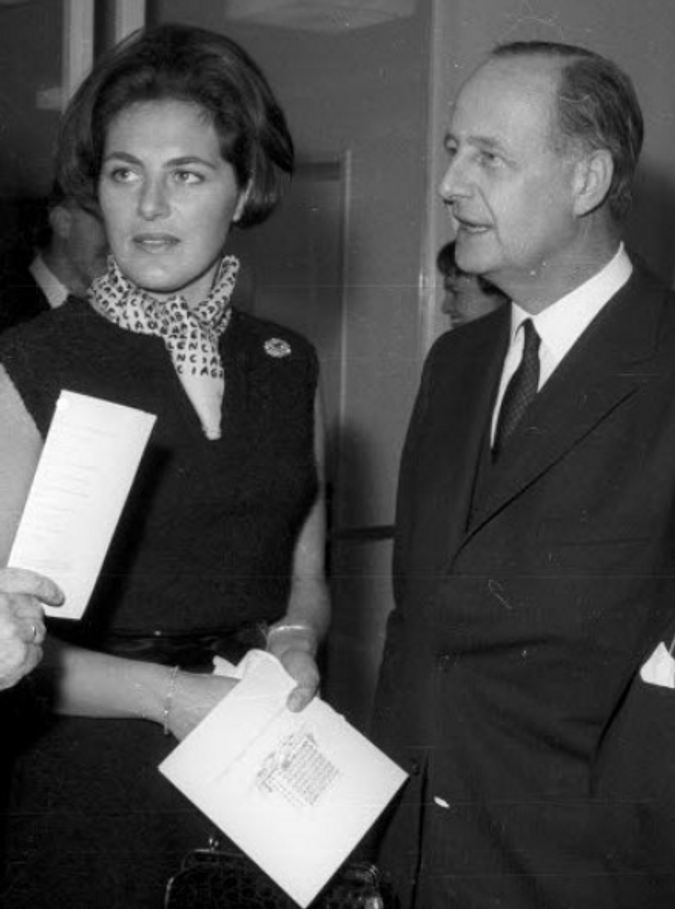 Rudolf-August and Maja Oetker in 1966 Image by wikimedia

“The paradox of the Holocaust is that the innocent feel guilty and the guilty feel innocent,” said Michael Berenbaum, the scholar who oversaw the creation of the United States Holocaust Memorial Museum in D.C. and now runs the Sigi Ziering Institute, which explores the ethical and religious implications of the Holocaust, at American Jewish University.

The “perpetrating generation” felt innocent, said Berenbaum, and the generation now in charge is the one that feels responsible. “Some of the most important work in coming to terms with the Holocaust has been done by them. They have confronted their past in a way that is powerful and honorable.”

Volkswagen and Daimler-Benz are two other famous German companies that have commissioned extensive historical reports into their roles in the Third Reich. In 2019, after a magazine expose, the Reimanns, who own Krispy Kreme, Panera, a majority stake in Intelligensia coffee, and so much more, pledged $5.5 million to Holocaust survivors and $5 million more to the people forced to work for their company during World War II.

But 19 years ahead of the Reimann family’s monetary reparations, the Dr. Oetker company gave an undisclosed sum to the EVZ Foundation established by the German government to benefit forced laborers.

In 2015, the Oetker family also decided to audit its extensive art collection for pieces Rudolf August procured unethically, an undertaking more commonly initiated by art institutions. Schillinger said that the project is still underway, and that so far 10 artworks have been identified and settled with the heirs of prior owners, through restitution or compensation.

“If the Oetker report is like the Volkswagen report, which I have read, which was first-rate, and by honorable historians — and if the family has donated funds — and if they have also given back art — then kol hakavod,” historian Berenbaum said, using the Hebrew phrase for high praise. “We can’t ask any more.”

Berenbaum said he wasn’t sure how Dr. Oetker could best convey the complicated truth about its past to customers while it expands its presence in distant L.A. Best practices for such a scenario don’t seem to have been established yet.

“We don’t know how this company will integrate themselves into the Los Angeles community,” Berenbaum said. “But we need companies like this as models for precisely what we should do with ill-gotten gains, whether from the Holocaust, or American slavery, or another atrocity. If this company commissioned an honest history, I would welcome them. I would buy from them.”

Is Pudu Pudu Nazi pudding? How Dr. Oetker came to terms with its past