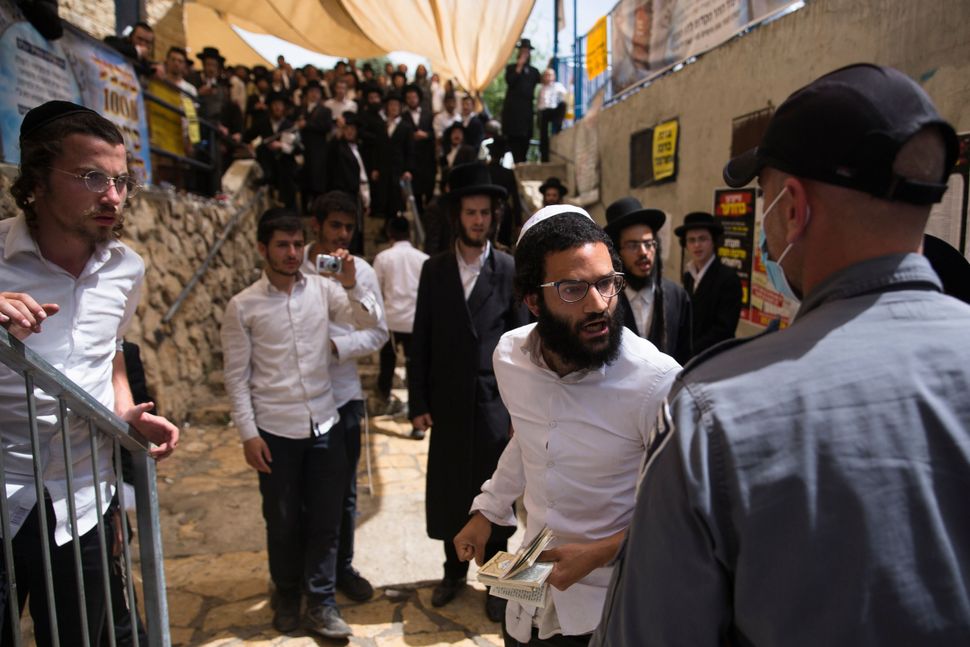 Orthodox Jews clash with a police officer after dozens were killed in crush at a religious festival in Mount Meron on April 30, 2021 in Meron, Israel. At least 44 people were crushed to death and over 150 more injured in a stampede, as tens of thousands of ultra-Orthodox Jews gathered to celebrate the Lag B’omer event, late Thursday. Photo by Getty Images

The Mount Hermon tragedy Thursday, in which at least 45 people were killed during a Lag Ba’Omer celebration in Israel, is an unusual event in modern Jewish history. While large crowds and religious fervor often make for a dangerous combination, the lack of many organized pilgrimages in Judaism means that Jews have rarely been caught in the kind of deadly stampedes that have plagued the Muslim Hajj in Saudi Arabia and Hindu festivals in India. That said, the Mount Meron gathering led to tragedy in one previous incident over a century ago. Here is a brief overview of some religious stampedes in the 20th and 21st centuries.

A crowd of more than 3,000 had gathered in a Birmingham, Ala., church on September 19 to hear a speech by Booker T. Washington as part of the Baptist Convention. After Washington spoke, a fight broke out and shouts of “fight” and “quiet” were mistook for “fire,” leading to a rush for the exits that killed 115 people.

In pre-state Palestine, a Lag B’Omer celebration of 10,000 people at Mount Meron ended in a tragedy similar to Thursdays. The collapse of a roof railing led to 100 people falling over 20 feet onto a crowd gathered below. Eleven people died.

The Kumbh Mela is a Hindu pilgrimage festival celebrated every 12 years at four sites across India. The February 3 pilgrimage was the first following Indian independence but turned into a tragedy when nearly 800 people were trampled or drowned in a river at the Prayag site.

Three people were killed on July 10 and other injured as tens of thousands of people rushed to a soccer stadium that Pope John II was visiting in Brazil. According to the Washington Post, “generally chaotic conditions and poor planning on the part of Brazilian authorities” led to a dangerous atmosphere during the 10-day visit to the world’s most populous Catholic nation.

A new year’s celebration in the Beijing suburbs ended with the deaths of 37 people in a stampede on Feb. 6. The incident occurred in a park at the end of the national Spring Festival, where revelers gathered to release lanterns.

Nearly 1,000 Iraqis were killed on Sept. 1, during a Shiite pilgrimage over a bridge in Baghdad after rumors spread that a suicide bomber was in the crowd. At least 950 were either crushed in the crowd or died after falling off the bridge. The event marked the largest single-day loss of life since the U.S. invasion began two years earlier, according to the New York Times.

While many of the most dangerous stampedes have occurred at events during the Hajj in Mecca, Saudi Arabia, the Mina stampede on Sept. 24 was the largest. The tragedy took place as two groups of pilgrims collided on their way to participate in a ritual called “the stoning of the devil.” Thousands in attendance were crushed and while the Saudi Arabian authorities never released an accurate death toll, media estimates put the total at around 2,400.