Israel ambassador likely to be named this week, with shortlist narrowed to two 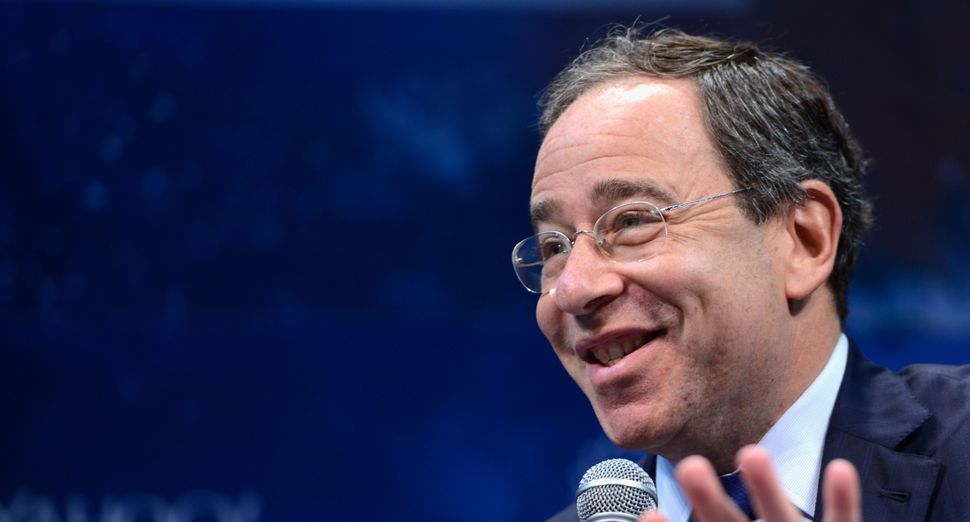 President Joe Biden has narrowed down his list of candidates for ambassador to Israel to two candidates who have strong ties to the pro-Israel community. Tom Nides, a former official in the Clinton and Obama administrations; and Robert Wexler, a former congressman from Florida, are both on the short list for one of the high-profile diplomatic posts of the administration, sources close to the White House said.

The appointment could come as soon as this week, with Nides emerging as the likely pick. Sources said Steve Ricchetti, a counselor to the president, is pushing for Nides’ appointment.

A White House spokesperson told the Forward they have “nothing to share on personnel matters.”

But Michael Adler, a Miami-based real estate developer who has a close relationship with Biden and was originally seen as the frontrunner has accepted an offer to serve as U.S. Ambassador to Belgium. The Washington Post first reported last week that Nides was the new frontrunner.

Wexler, 60, declined to comment whether or not he’s expecting a call from the White House soon.

During the Obama administration, Wexler was courted to be ambassador to Israel in the wake of his surprise resignation from Congress in 2009 after seven terms to become president of the S. Daniel Abraham Center for Middle East Peace. His retirement was seen as a move to serve in an outside role as a channel to the Israeli public on behalf of the Obama administration.

Nides, 60, brings both political and diplomatic experience to the job, and has been characterized as “charming” by people who have worked with him in the past.

Born and raised in Duluth, Minnesota, Nides made his first foray into politics in 1979 when he helped to arrange the appearance of then-Vice President Walter Mondale at his Duluth East High School commencement ceremony. After graduating with a major in political science from the University of Minnesota, he and Amy Klobuchar both interned for Mondale. He went on to work for Mondale’s presidential campaign in 1984 as Minnesota’s field director. He later worked for Rep. Tony Coelho from California, who was House Majority Whip and as chief of staff to House Speaker Thomas Foley before going to the Trade Office under President Bill Clinton.

After a short time in the private sector – first at Fannie Mae and then as CEO at Morgan Stanley – Nides replaced Jack Lew as deputy secretary of state for management and resources in 2011 and also served as former Secretary of State Hillary Clinton’s liaison to Congress. He rejoined Morgan Stanley as vice chairman in 2013, and in the 2016 election he was the favorite to serve as Clinton’s White House chief of staff had she been elected.

Jarrod Bernstein, who served as Obama’s White House liaison to the Jewish community, said Nides would be a “phenomenal choice” if nominated. “He’s a traditional pro-Israel Democrat,” said Bernstein. “He knows the U.S. government bureaucracy, but he has a very finely tuned political instinct both in the U.S. and Israel.”

A history with Joe Lieberman

Nides also served as campaign director for Sen. Joe Lieberman in his 2000 vice presidential campaign. Nides, who is Jewish, sought to assuage concerns that Lieberman’s religious observance would raise eyebrows or complicate campaign scheduling. He insisted that the vice presidential nominee could only gain respect. During the campaign, Lieberman took time off from the campaign trail during Shabbat and the High Holy Days.

“If you asked the average voter, ‘What would you rather have: the candidate for vice president going to another bean feed or doing another political rally, or spending the day with his family in a house of worship?’ I’d think most voters would rather he be in a house of worship,” Nides was quoted as saying.

“I’m very excited that he is being considered apparently as the frontrunner for ambassador to Israel,” Lieberman told the Forward in a recent phone interview. “He will be as loyal to President Biden as he was to me and the 2000 campaign. He will have Israel’s security and well-being at heart.”

Lieberman described Nides as a “very likable person with a great sense of humor.”

The former senator from Connecticut said that he had heard from Israeli officials that at the time Nides served in the State Department “they felt he listened to them and he was helpful to Israel.”

In a recent interview, Wexler told the Forward that the Abraham Accords, the normalization agreements signed between Israel and the United Arab Emirates and Bahrain, and the kingmaker role Knesset Member Mansur Abbas from the United Arab List is playing in Israeli politics is a “tremendous opportunity” for the Biden administration’s envoy to play to a role. “These are fundamental game-changers that will change the dynamic of Israel for generations,” he said. “These are the pressing opportunities that America has, if you care about the U.S.-Israel relationship, if you care about furthering Israel’s normalization and incorporation into the region, and if you care about improving conditions for Palestinians.”

“That’s a once in a generation opportunity,” Wexler added.

Ileana Ros Lehtinen, a former Republican Congresswoman from Florida, called Nides a perfect fit to serve the president given his experience at the State Department.

Ros Lehtinen chaired the House Foreign Affairs Committee from 2011–2013 when Nides, along with deputy secretary of state William Burns, testified on the findings of a report on the September 11, 2012, attack on the U.S. Consulate in Benghazi, Libya. She told the Forward that she wanted Nides to testify because he was close to Clinton and had ties to the Susan Rice team at the National Security Council.

“Nides was previously involved in Secretary Clinton’s decision to ram through the hold that I had placed on funding to the West Bank and Gaza unless reforms were made,” Ros Lehtinen recalled. “I had released funds for Area C, security assistance and some humanitarian funding but kept the hold for all else, and Clinton sent a long letter explaining her decision to lift my hold.”

Lieberman and Bernstein noted that Nides’ private sector experience and international relationships are a bonus, as the administration pledged to build upon the economic opportunities created by the Abraham Accords.

Appointing someone with government and diplomatic experience is crucial, said Aaron David Miller, a senior fellow at the Carnegie Endowment for International Peace and a former U.S. peace negotiator. He noted that out of the last 13 ambassadors to Israel since the mid 1970s, 10 of them were career Foreign Service officers. “Even though the Biden administration has clearly demonstrated that Israel-related issues, including Iran, are not top priorities for this administration, I think the Israel issue is complicated enough and potentially consequential to the Biden foreign policy agenda that they want to make an appointment that is viewed as competent professional,” Miller explained.

Without drawing a direct comparison with Trump’s ambassador to Israel, David Friedman, who was seen as more partisan and affiliated with the right-wing in Israel, Lieberman suggested that with Nides as the administration’s envoy nobody would doubt that he’s representing the U.S. Lieberman currently serves as a senior counsel at the Kasowitz Benson Torres law firm in New York, where Friedman was a partner before he left for Israel.

“Some ambassadors end up being so close to the country they’re in, that they sometimes seem like they’re more the ambassador from that country to the U.S.,” he said. “But I think Tom will never have any confusion. He will be the American ambassador to Israel but he will be a very honest communicator not only for America to the leadership of Israel, but also for the leaders of Israel to the Biden administration.”

“The people in the Biden White House will always take Tom Nides’ calls, and that’s a good thing for Israel,” Lieberman said.

Ros Lehtinen said that given Biden’s recent decision to restore funding for Palestinians living in West Bank and Gaza and for the United Nations Relief and Works Agency (UNWRA), “Tom seems to be a good fit for the president’s views. He espouses President Biden’s stance on issues relevant to the U.S.-Israel relationship, as Ambassador Friedman did with President Trump.”

Jack Seiler, a retired retail jeweler in Duluth, who knew Nides’ parents and siblings very well, said he remembers Nides growing up being a sharp and down-to-earth person. “He has got a great personality and a good sense of humor,” Seiler said in an interview on Sunday. “He will do wonderful for Israel and will be a wonderful envoy for the United States.”

Israel ambassador likely to be named this week, with shortlist narrowed to two