Arab physiotherapist heals more than the physical for her Jewish patients 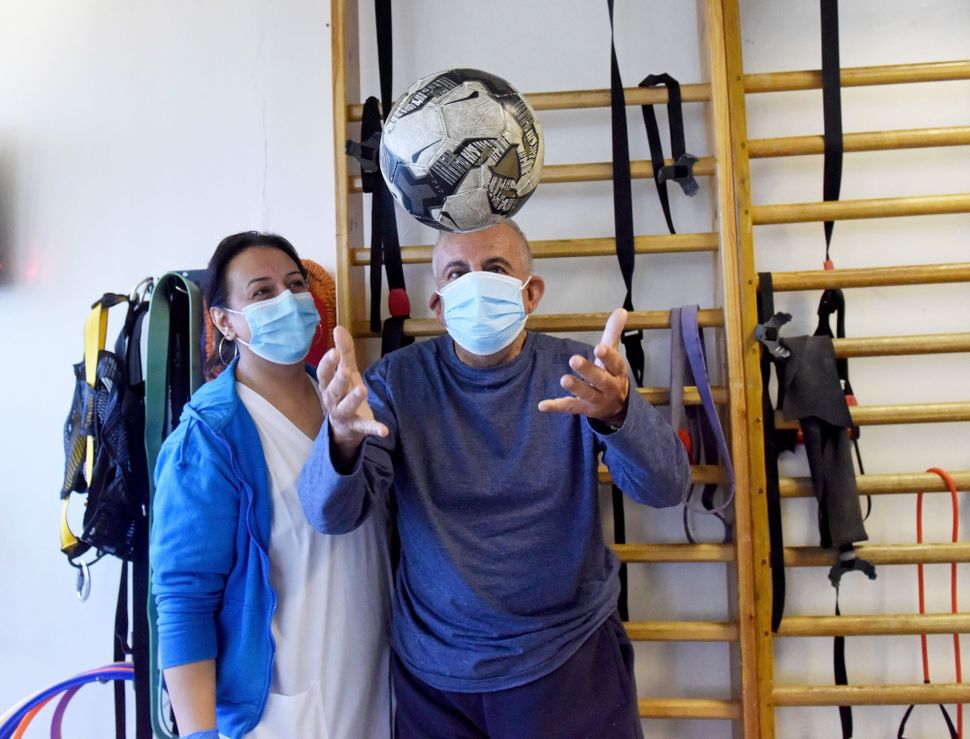 Rasha Ghaith, a physiotherapist, hands a soccer ball to her patient, a 70-year-old retired lawyer Uri whose muscles have been ravaged by an autoimmune illness leaving him mostly wheelchair-bound. With her help, he’s standing, supporting him with a hand at the small of his back.

“Go ahead,” she tells him, “Throw it.” His face, pulled into a tight frown, seems to loosen as he tosses the ball to Mohammed, his health aide. They toss it back and forth. He’s smiling now, even laughing out loud.

“Way to go. Excellent!” cheers on Ghaith, 41, whose 20 years in the profession have been spent here, in the warren of rooms that comprise the rehabilitation center at Hadassah Hospital Mount Scopus, located on a mountain ridge overlooking Jerusalem.

“The thing is, you are really helping support me,” Uri, who preferred only to share his first name, tells Ghaith whose brown hair is pulled back into a ponytail and wears a turquoise hooded sweatshirt over her scrubs with the words Hadassah Rehabilitation Department written on the back.

“Alone I could never do this, without you next to me.”

She grew up in Shuafat, an Arab neighborhood in East Jerusalem, and now lives in an Arab village in the foothills of the city. Many of her patients, including Uri, are Jewish. But the rehabilitation center is not a place where people spend much time contemplating national identity. They have come to repair broken bodies. Her patients are reminders of how fragile our bodies are, cautionary tales of accidents, strokes and illness. She and her colleagues have also helped rehabilitate Jewish and Palestinian survivors of terror attacks, soldiers recovering from combat injuries and more recently, former COVID patients who have had to relearn how to use their bodies and to walk again after months on life support.

At the center there’s an indoor hydrotherapeutic pool where patients can be lowered into the water by electric lift. There are some fancy treadmills, too. One is a zero-gravity treadmill designed originally for NASA astronauts, another uses sensors and motorized engines to help paralyzed people learn to use their legs again.

Most of the work is done in a network of rooms with physiotherapy beds for getting medical massages and doing exercises. There are also stacks of yoga mats, shelves of brightly colored exercise balls, hand weights and mini trampolines. Through the windows one hears the sounds of hammering and the construction of what will be, in about a year, a new, more spacious and modern rehabilitation department. 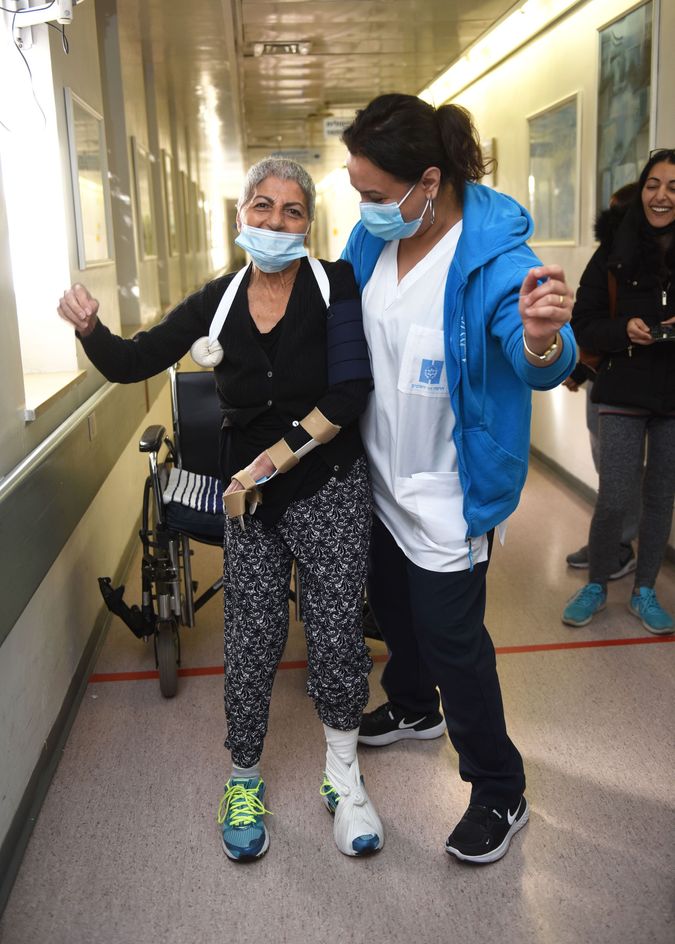 “I’m not treating a hand or a leg,” said Rasha Ghaith. “We’re dealing with a human being who also has feelings.” Photo by Debbie Hill

Ghaith has a strong bond with her patients. She seems to know exactly how to gently encourage them when the painstaking exercises and frustration being able to execute them become overwhelming.

“Yalla, kadima,” she urges them on as she tries to get them to move sore and stiff limbs — a mix of Arabic and Hebrew words that both mean the same thing: “Let’s go.”

She’s developed an expertise in pelvic floor rehabilitation and has learned how to navigate culturally delicate conversations with her religious Jewish and Muslim women patients.

The physiotherapists like Ghaith say working with such a diverse population has made them into better, more sensitive practitioners. They have also learned that to motivate a patient, it’s key to find out what activities they most want to return to. For their religious patients, it often has to do with ritual and prayer.

For a devout Muslim, that often means helping them relearn how to physically be able to safely get on the floor, kneel and bow for prayers and then be able to get up again afterwards. Or helping them use their hands and fingers again well enough to use the misbahah, Islamic prayer beads.

For a religious Jewish man who is Kohen, a member of the priestly caste, that can mean helping them rehabilitate their arms so they can wrap themselves in a prayer shawl and raise them in the air for the “Birkat Kohanim,” the traditional priestly blessing. For Orthodox Jewish women, it can mean helping them to be able to get down the stairs of a pool so they can immerse themselves in a mikvah, a ritual bath.

Ghaith is part psychologist, part cheerleader, part master of human anatomy. She has a seemingly bottomless bag of tricks, knowledge and warmth.

“I’m not treating a hand or a leg,” she says. “We’re dealing with a human being who also has feelings so it’s not only just working physically with the patient.”

Rachel, 71, one of her current patients who is recovering from a stroke, says of Ghaith: “She pushes me forward … for me, she’s like magic.”

Arab physiotherapist heals more than the physical for her Jewish patients