Equestrian events are the only Olympic sport where both men and women compete together. ‘And they don’t discriminate against the horse’s sex either,’ Goldstein said. Courtesy of Ifat Zohar Photography

Danielle Goldstein Waldman attracts attention wherever she goes, even when she isn’t riding the horse on which she hopes to compete in the 2020 Olympics, which will be held in Tokyo this summer. The thousands of colored feathers the championship-winning show jumper wears woven into her hair have earned her the social media hashtag #FlyingFeathers for the way they flow behind her when she’s riding.

While Israel’s equestrian team has not yet announced the four athletes who will represent it in Tokyo, barring injury, Waldman – known as Dani – is certain to be on it, sources say. It will be the champion rider’s first Olympics and the first Olympics in which Israel has qualified to compete in equestrian events. Which it did partly thanks to Waldman’s performance in the qualifiers.

Born and raised on Manhattan’s Upper East Side by parents who were world-ranked squash champions, Waldman now lives in Putten, the Netherlands, about an hour southeast of Amsterdam with her husband, Alan Waldman. They own Waldman Horses, on which they keep 600 equines, breeding about 100 each year, said Waldman in a video interview from her plant-filled home. “I found the only other American Jew in Holland doing horses to marry,” she quipped. 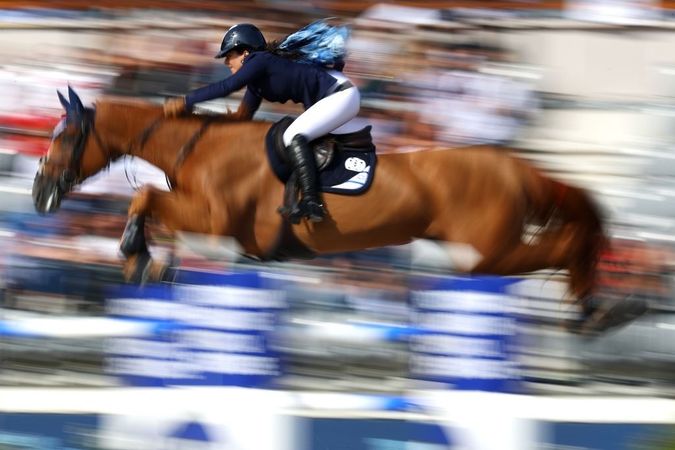 She was 8 years old when she first got on a horse, invited by a friend she was visiting on Long Island to take a riding lesson with her. She began competing in horseback immediately and that summer won the Hampton Classic in her age group. It didn’t surprise her. “I was a really competitive person my whole life,” said Waldman, who also competed in tennis tournaments even at that young age.

Before long, she was playing tennis less and riding horses more. After 5th grade she transferred from the Dalton School to the Professional Children’s School, an independent Manhattan institution catering to child athletes, dancers, actors and musicians who need to combine their education with their career.

She attended Hebrew school at the Upper East Side’s Temple Shaaray Tefilla, and celebrated her bat mitzvah in Israel, “at sundown at the foot of the Dead Sea,” Waldman recalled. She attended college at Duke University, earning a Bachelor’s Degree in Global Economies and Development. She was away most weekends competing, she said, so didn’t have much chance to be a part of Duke’s Hillel. 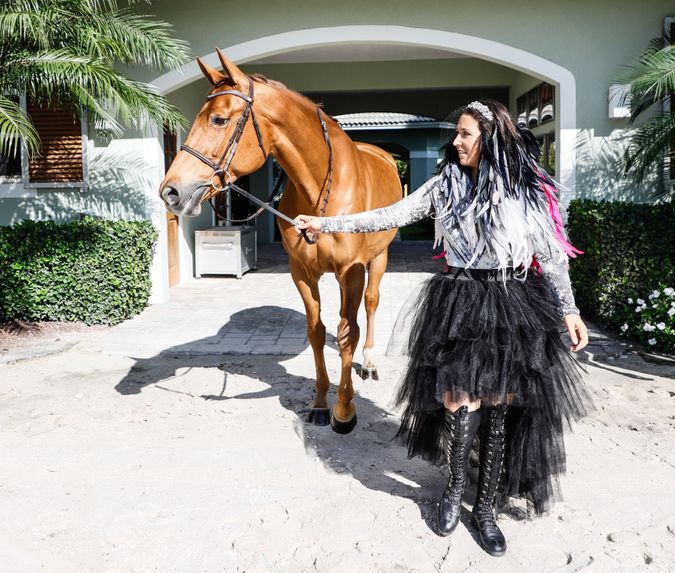 A native New Yorker, Danielle Goldstein Waldman has been competing since she was 8 years old. Courtesy of Jose Woldring

Becoming an Israeli citizen in 2010 re-connected Waldman to Judaism, she said. “I got more into it culturally. All of my education from when I was younger came back and I realized how much a part of me Judaism is. I also got really into cooking and would host seders with my friends.”

While her family life was “very Reform” and after her bat mitzvah she went to synagogue only on the High Holidays, “I built new memories as an adult.”

In a typical year, Waldman spends a month or two in Israel, training at equestrian centers near Tel Aviv, Haifa and Caesarea, and a similar amount of time in the U.S., seeing family in New York and Florida. 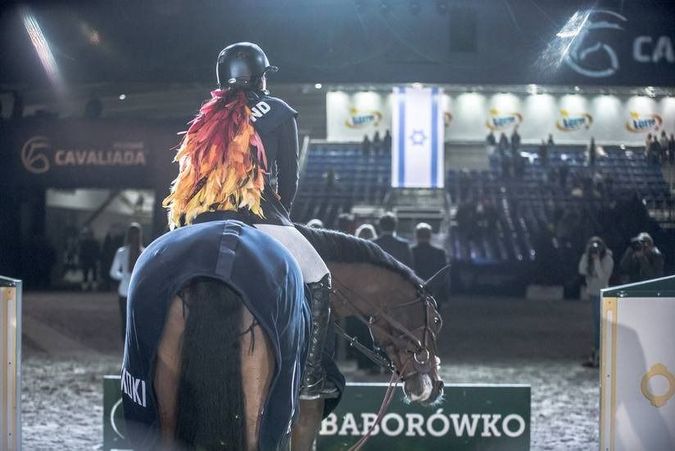 Including Goldstein, there are around a dozen show jumpers who represent Israel on the professional circuit. Courtesy of Cavaliada

What Waldman is planning is to keep riding – and riding in her inimitable style.

So far she has competed in four European championships and two World Games, and has won six 5th degree Grand Prix, the highest level possible. The most recent was the Palm Beach Masters in March 2020, which was the last to be held before the world shut down due to COVID-19.

Creating her own style

Unlike in other sports, elite riders can continue competing into their 60s, Waldman said. Which means that her best years may still lie ahead. Riding is also “the only Olympic discipline where men and women compete against each other,” she said. “It’s non-discriminatory. And as a woman, I do love kicking the men’s asses. It still feels really good.”

Waldman’s unique style isn’t just about the feather extensions in her hair, which she makes herself, hand-dying feathers from 10 different bird breeds, from guinea fowl to rooster and ostrich – which she tries to ensure are sustainably sourced. She gets them sewn in at a hairdresser, and changes them every three months. “I’m inspired by someone I saw on the street who looked amazing, by fashion, or the season or my mood,” she said. “I had neon ones inspired by a Valentino show,” said the equestrienne. She once sported flame-colored feathers and said it made her feel “like it was an internal phoenix.” 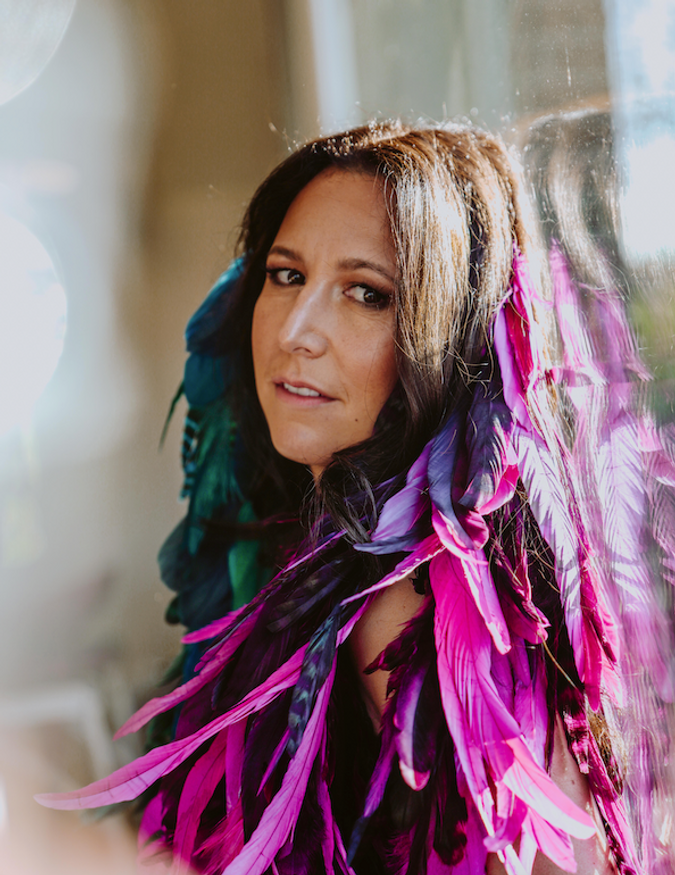 ‘They ask me to take the feathers out and I say no,’ said Danielle Goldstein Waldman. ‘Someone literally said that I’m offending my horse.’ Courtesy of Jose Woldring

In daily life the waist-length feather extensions “are super annoying,” she admits, but when she’s riding, she gathers them into a ponytail behind her riding helmet.

She started changing her hair color as a young girl, and began adding feathers in her hair after she met her husband. “I was working my way up to the very top of the sport, and felt everybody looked the same and was bored with it. I wanted to do something that was more me,” said Waldman. “It’s a traditional sport, and to differentiate yourself was so shunned.”

She doesn’t wear typical riding clothes, even in competition. Instead of jodhpurs, she wears yoga pants. “I refuse to wear any kind of pants with hardware,” she said. “It’s stupid to wear hard closures when we bend over on the horse.” Rather than a formal shirt, she wears a crop top underneath her jacket which, outside of the Olympics, can be any color. Waldman says she switches it up between the royal blue, bright teal and aubergine-colored blazers in her riding wardrobe. She designed a capsule collection of yoga-inspired riding clothes for an equestrian apparel brand, and more recently modeled on social media a beautiful purple suit with waist cut-outs, which she designed.

Her fashion sense does not please everyone in the riding world. “Once I wore a white jacket and got a lot of sh*t for it. It was non-traditional and somehow offensive. I have gotten phone calls from the president of the international governing body telling me that people are saying I’m not elegant enough for the sport. They think that I’m ruining the sport of show jumping somehow,” Waldman shared. “They ask me to take the feathers out and I say no. I’m within the rules, so there’s nothing they can really say. People are insanely mean. Someone literally said that I’m offending my horse. You can’t imagine the dumb things people say just to be mean.”

And while individuals say and write nasty things about what Waldman is wearing while she rides, “The Israeli equestrian federation and the Olympic committee have always been behind me. Flair helps get more eyeballs on this sport, so they’re all for it. They’re happy that a rider is not a sheep.”

She is also one of five women on the Israel Olympic Committee’s Female Empowerment Within Sports Council, helping promote individuality and strength among women athletes.

Being criticized for her appearance hurts, Waldman admits, “but it’s certainly not going to make me stop what I’m doing.”

Waldman started a concept she calls “Own YouR IDEntity,” pointing out that the word RIDE is within it. “Anybody who wants to be a little different in our sport feels empowered to do it,” she said. “I started the idea to be playful, and then it took on a life of its own.”

She hopes one day to start a foundation or kids summer camp based on the idea.

Because Waldman knows just how powerful it is not only to clear a six-bar hurdle on the back of her horse Queensland, but also what it means to feel great about herself. “When I look in the mirror and think I look like hot sh*t, if I feel good about myself. It doesn’t matter what other people say.”