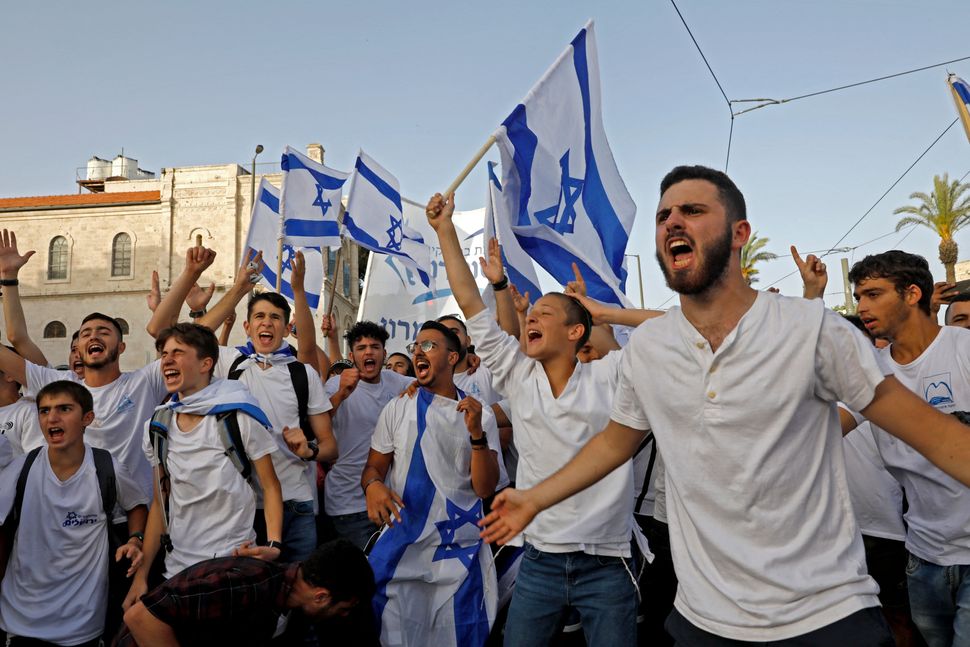 Israelis take part in the annual “Jerusalem Day” march to mark the reunification of Jerusalem after Israel captured the eastern part of the city from Jordan in the 1967 Six-Day War. Photo by GIL COHEN-MAGEN/AFP/Getty Images

The controversial annual flag march by Jews in Jerusalem’s Old City was canceled by the police and then reinstated against the backdrop of heightened tensions in the city between Jews and Palestinians that culminated late in the afternoon Monday with rocket fire from the Gaza Strip, directed at the Jerusalem area by Hamas.

At one point in the day, the police decided to break up the Jerusalem Day flag march, which generally attracts large number of religious Jewish young people, moments after it began, following a day of violent clashes in the Old City on Monday. But late in the afternoon, the police announced that the Jerusalem district commander of the police decided that the march would be allowed to proceed after all, but not through the Damascus Gate.

Speaking to Channel 12 News Monday evening, Israel Police Commissioner Kobi Shabtai said the police had been too restrained in their response to the violence. “I assume that at the moment, we’re at the stage of taking off the kid gloves of sensitivity that had prevailed,” he said.

Clashes on the Temple Mount compound on Monday morning left more than 300 Palestinians wounded, according to the Palestinian Red Crescent, prompting an Israeli decision to bar Jews from entering the holy site.

Despite the hundreds of Palestinian casualties, Shabtai said police “showed too much restraint.”

The Damascus Gate is a main entryway into the Muslim Quarter and a flashpoint in its own right last month over an earlier decision by the police to place crowd barriers in the plaza in front of the gate. The march is timed for Jerusalem Day, which this year falls on Monday, marking the city’s reunification following the 1967 Six-Day War.

The march, which the organizers view as a celebration of the return of the Jewish people to the Old City of Jerusalem after Jews were excluded from the area by the 1949 armistice line, is seen as a provocation by many Palestinians, particularly as the route traditionally includes the Muslim Quarter of the Old City.

Over the past several days, tensions in Jerusalem have centered on clashes between Muslims and Israeli police on the Temple Mount in the closing days of the Muslim holy month of Ramadan and in the Sheikh Jarrah neighborhood of East Jerusalem, where a pending court case pitted Jews against Palestinian residents of the neighborhood in a dispute over homes that had been owned by Jews in the 19th century and where the Jordanian government settled Palestinians in the 1950s.

Netanyahu’s office had been inundated with messages from prominent figures abroad urging Israel to put a halt to the violence in Jerusalem and to change the route of the Jerusalem Day march, a Palestinian source said. “It’s in Netanyahu’s hands. It’s up to him to stop the violence spreading to the West Bank,” the source said.

Rocket alert sirens warning of incoming rockets from Gaza sounded Monday in the Jerusalem area moments after a 6 P.M. ultimatum issued by Hamas for Israel to remove its forces from Jerusalem’s Temple Mount. A spokesman for the Hamas militant group said the leadership of a joint command of armed movements in the Gaza Strip had given Israel “an ultimatum until 6 P.M.” to withdraw its security forces from the Temple Mount compound and the city’s Sheikh Jarrah neighborhood.

Hamas, the Islamist movement that controls the Gaza Strip, is closely watching all of the developments in Jerusalem, its leaders have said. “The resistance is ready for any incident, and will not sit idly by if Israel does not curb aggression and stop all plots against the Palestinian people and against the Al-Aqsa mosque,” the leader of Hamas’ political wing, Ismail Haniyeh, said.

The U.N. Security Council held emergency consultations Monday on the escalating violence in east Jerusalem and was considering a proposed statement calling on Israel to cease evictions and calling for “restraint” and respect for “the historic status quo at the holy sites.”

Council diplomats said all 15 members expressed concern at the clashes and rising violence but the United States, Israel’s closest ally, said a statement might not be useful at this time. Nonetheless, the U.S. agreed to have council experts discuss the statement.