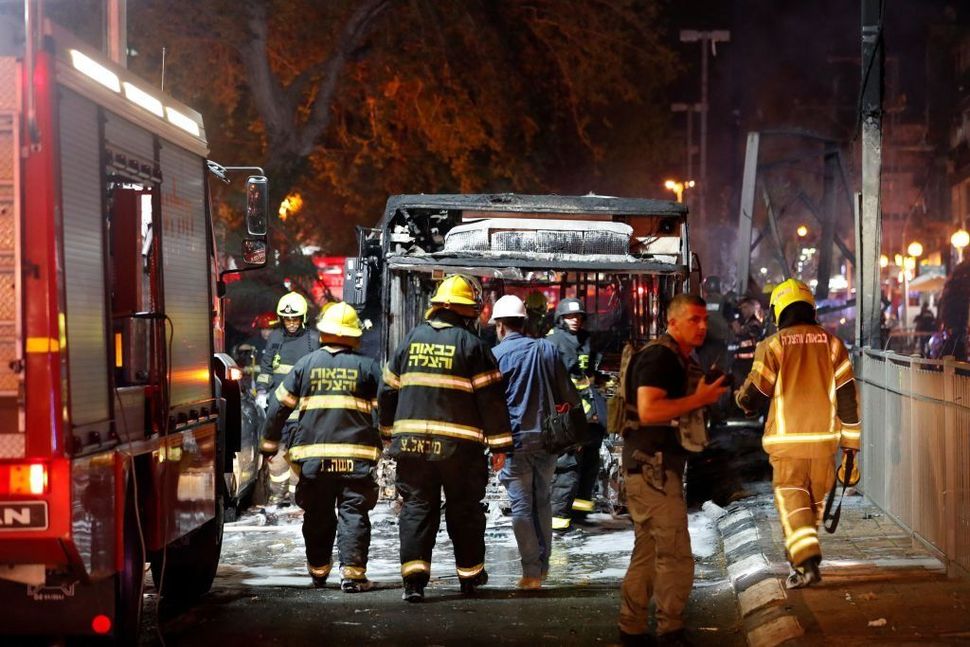 Israeli firefighters check out a burnt bus in the Israeli town of Holon near Tel Aviv, on May 11, 2021, after rockets are launched towards Israel from the Gaza Strip. Photo by AHMAD GHARABLI/AFP/Getty Images

Hundreds gathered on Tuesday for the funeral of an Israeli Arab man who was shot dead the night before in clashes in the central city of Lod, amid high tensions throughout the country and renewed demonstrations by the Arab community against Israel’s latest actions in Jerusalem and the Gaza Strip.

Clashes between police and some protesters broke out around the funeral site in the mixed Jewish-Arab city, as protesters hurled stones at police officers, who were trying to block their route, and set police vehicles on fire as well as a bus and other objects. Police forces responded with stun grenades and sponge-tipped bullets.

Alongside the clashes in Lod, police have reported on several other demonstrations in the country. Some 200 protesters demonstrated in Jaffa, where, according to the police, two officers were wounded and three protesters were detained.

An 18-year-old Jewish man suffered moderate to severe wounds when he was stabbed in the chest on Tuesday in Be’er Sheva not far from clashes between demonstrators and the police in the vicinity of Ben Gurion University of the Negev. Investigators are examining a possible link between the stabbing and the confrontations nearby.

Arab and left-wing Jewish protesters claimed that right-wing demonstrators threw stones and bottled at them. The police intervened to separate the two sides and confined the Arab demonstrators to the grounds of a university dorm.

In another development, police said they spotted a man trying to stab another man on Ben-Gurion Blvd. in Be’er Sheva. The assailant attempted to flee into the Soroka Medical Center but was apprehended. The case is being investigated.

Musa Hasuna, 32, was shot overnight Monday. Hasuna and another Lod resident, 20, were wounded during a riot in which local Israeli Arabs threw stones at Jewish homes, ripped up road signs and set two Jewish educational institutions alight. Three Jewish residents of Lod were arrested for being involved in the shooting; their weapons were collected to see which was responsible for the fatal shots.

A source familiar with the investigation said that all the suspects have weapons permits and claimed under questioning that they were forced to defend themselves after young men attempted to throw stones and firebombs at them. The shots were fired from a distance of several dozen meters.

The Higher Arab Monitoring Committee of Arab citizens of Israel called on the Arab public to attend Hasuna’s funeral, so that there would be “a mass cry of anger.” The committee met in emergency session in Nazareth, and called to continue holding demonstrations and local rallies in all Arab communities starting at 9:30 P.M.

The initial investigation showed that the events began after midnight, when several dozen young Israeli Arabs from Lod started rioting near the city’s Hashmonaim Square. Residents of nearby streets, some of them carrying Israeli flags, came out of their homes in response and a direct confrontation ensued. According to one of the Jewish residents of Lod, at least four people were involved in the shooting. In videos posted online one can several people, one of them carrying a firebomb, running toward a car, after which several shots are heard.

Hasuna worked as a truck driver and leaves a wife and three young children. His father, Malek, told Haaretz that his son had not been demonstrating but had simply passed through the area on his way home from visiting his brother-in-law. “May the prime minister feel the pain I’m feeling now,” he said. “This is my son, my right hand.”

Some 200 masked men have demonstrated Monday night near City Hall in Lod, where they burned trash receptacles and threw stones and firecrackers at police. Demonstrators also set a car alight and tried to set fire to the police station in the city. Policemen responded with tear gas and stun grenades and used batons to disperse the crowd.

In nearby Ramle, meanwhile, Jews stoned the home of an Arab family and several dozen demonstrators burned trash cans and tires Monday night, threw stones at buses and vandalized gates at roadwork sites.

Part of the new cemetery in Ramle was torched and several synagogues in the city were hit with stones. Bialik street in the downtown area was blocked to traffic because of fires on the road. The police responded with stun grenades.

In Jaffa some 200 residents, among them women and children, demonstrated Monday afternoon in the Ajami neighborhood and clashed with police who stopped them from blocking the road. At one point a demonstrator threw a stone at a riot police vehicle, and the police responded by firing stun grenades and sending in mounted police.

President Reuven Rivlin on Tuesday spoke with the chairman of the Committee of Arab Council heads, Mudar Yunis, and asked the Arab leadership to issue a “clear and determined call against the uncontrolled violence, against harming synagogues and against this wild behavior.” According to Rivlin, the actions and scenes from Monday and overnight, “Must concern the Arab leadership no less that the Jewish leadership.”

The president added that if the leaders of the Arab public “Do not issue a clear cry against doing damage to what’s holy to Jews and to the fabric of life together, the harm can become irreversible. We cannot let these sights repeat themselves. We cannot be prisoners of murderous terrorists who Hamas and Jihad who fire on Israeli civilians indiscriminately.”

Prime Minister Benjamin Netanyahu said Tuesday, following a situational assessment at Southern Command headquarters, “There were wild riots yesterday by hot-headed youths that we cannot accept. Our directive is to do everything to maintain law and order. I expect all public leaders, first and foremost the leaders of the Arab public, to come forward and condemn these riots and do everything to restore quiet.”