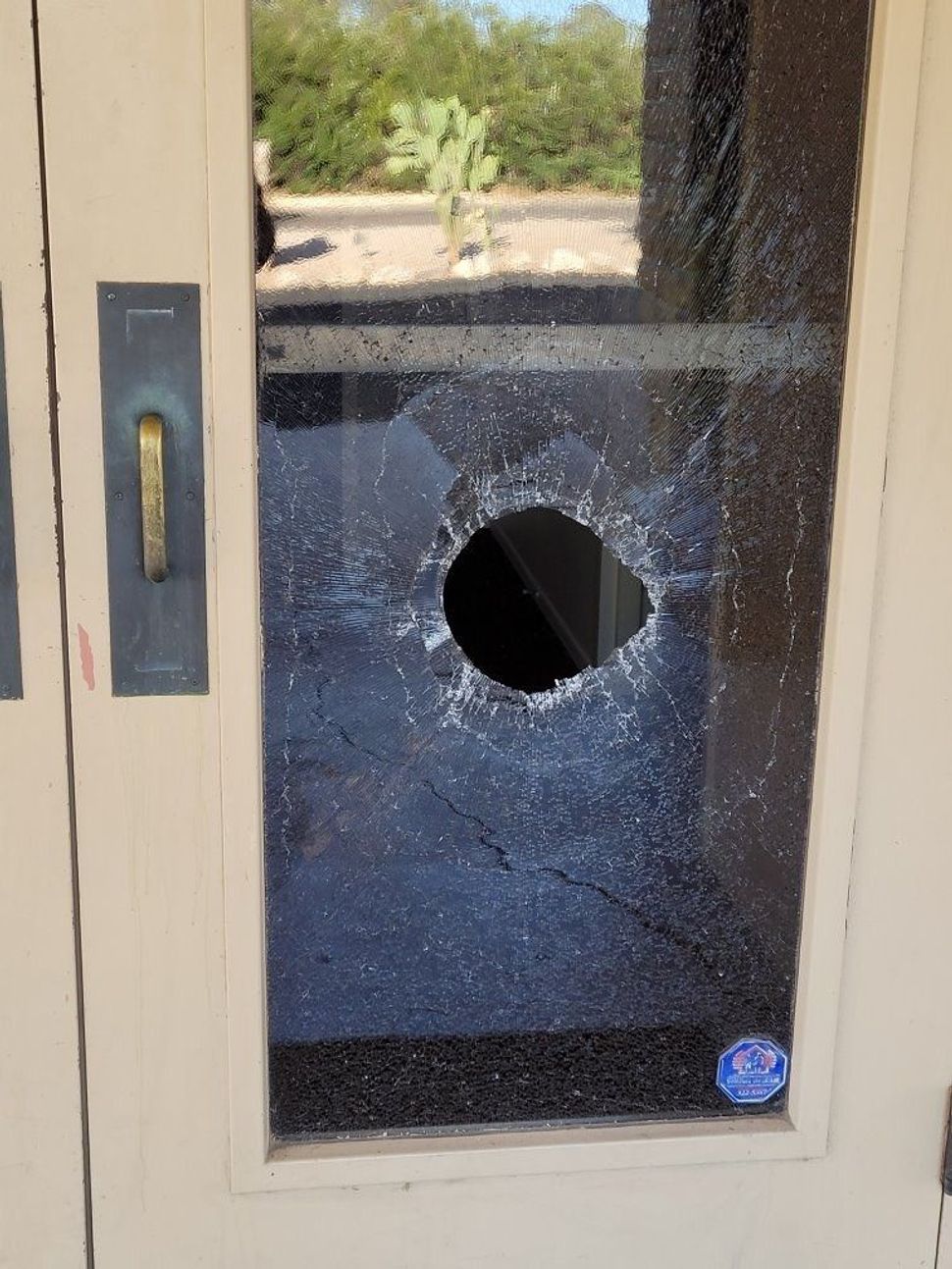 The front door of Congregation Chaverim in Tucson was smashed Tuesday night. Courtesy of Alma Hernandez/Twitter

Even as Israel and Hamas agreed to a cease fire Thursday afternoon, a spate of violent antisemitic incidents across the United States, that began when the conflict broke out, has set American Jews on edge.

This post tracked incidents reported in news accounts and on social media. It was updated to reflect the latest information through May 21. The Forward has attempted in each case to independently verify the incident.

Know something we should add? Click here to send us an email.

Robert Lewin was celebrating his 21st birthday with friends at the upscale New York restaurant Marea Thursday night when a group of eight to 10 people carrying Palestinian flags approached, making a ruckus, he said in an interview. “I sort of wanted to hide because I’m Jewish, and not get in any trouble or anything,” Lewin told the Forward. But one of the noisemakers saw Lewin’s friend was wearing a star of David necklace. The group surrounded them, swept their water glasses off the table and spilled their wine. “They said, ‘F— Zionists, Israel is worse than the Nazis and there should be another Holocaust,’” Lewin recalled. The whole incident was over in less than a minute.

A spokesperson for Marea did not return a request for comment.

Lewin and his friends were not the only ones to report antisemitic violence in New York Thursday. In the Diamond District, pro-Palestinian protesters threw fireworks from a car at Jewish people, injuring one, according to JTA.

The glass front door of Congregation Chaverim, a Reform synagogue in Tucson, Arizona, was smashed late Tuesday night when a large rock was thrown through it.

It is the third time the synagogue has had its glass broken during the pandemic. Rather than publicize the previous incidents, the synagogue, which has not convened for in person services since last March, decided to make the repairs quietly and try to move on.

“This is what compelled us to say, Enough is enough,” said Rabbi Stephanie Aaron, adding, “When you have three shatterings of glass in your shul, it’s hard not to think of Kristallnacht.”

Congresswoman Gabrielle Giffords, a member of the synagogue, condemned the vandalism in a tweet.

Yesterday, my synagogue in Tucson was vandalized. It’s heartbreaking to see such a disgusting act in a place where so many are meant to feel safest. Despite these actions, we will not be shaken. Hate has no place in Arizona.

A group of men wearing all black attacked Jewish diners at a sushi restaurant near West Hollywood on Tuesday.

An eyewitness to the attack, Natalie Schneider, who was dining at the restaurant told the Forward, “Those people know who lives in this area, that there is a big Jewish community, that’s why they arrived here, they were looking for Jews to attack. They were demanding to know who is Jewish and were very aggressive. I’m still shaken by what had happened.”

On Monday, an Orthodox man was chased by a caravan of people. A security video showed the man being pursued by a few cars with Palestinian flags. He was able to escape to a nearby synagogue.

Another antisemitic attack in L.A. last night making headlines. An Orthodox man was chased by a caravan of cars near Rosewood and La Brea avenues. He escaped and was not hurt. pic.twitter.com/igXNWx20AB

A New Jersey man said his family was harassed while on vacation in Bal Harbour, Fla.

While Eric Organ and his family were going for a walk, four people in an SUV driving by shouted antisemitic insults and hurled garbage at them, Organ told ABC 7 New York.

“Four males, probably in their early 20s starting to scream at us through the window — you know ‘free Palestine, f*** the Jews — die Jew’,” Organ said.