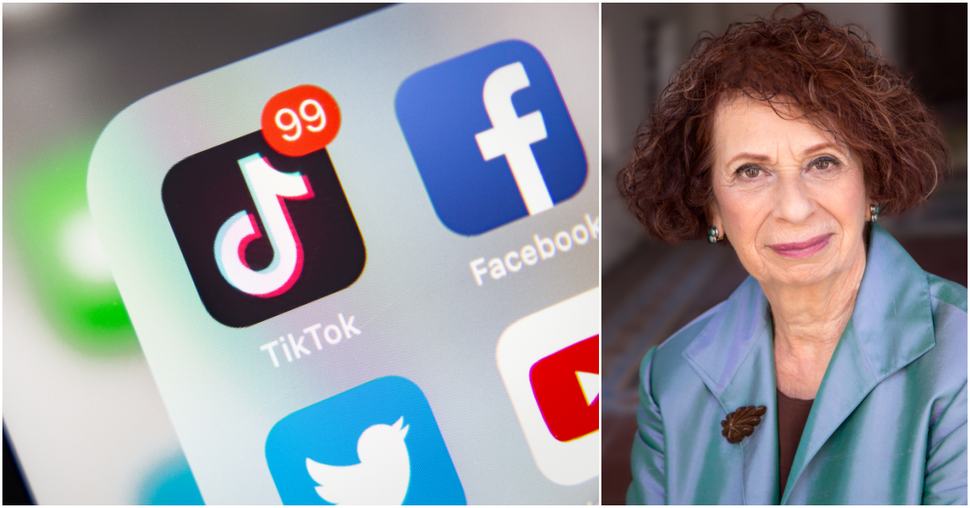 ‘I always thought my audience was middle-aged and older Jewish women, that turns out not to be the case,’ actress Annie Korzen said of her TikTok fan base.

Most people will recognize actor Annie Korzen from her four “Seinfeld” appearances, three as Doris Klumpus and one as an obnoxious airline passenger. But the octogenarian has been acting since 1975, in small roles ranging from “Tootsie” to “Black Monday,” and is now making her mark on an even smaller screen as one of TikTok’s ascendant superstars.

Korzen has more than a million likes and about seven million views and climbing. (Jewish geography note: my father knew Korzen when they were kids but they’d lost touch decades ago; while Googling ‘Jewish comedy,’ he found out she was in L.A. and insisted that we connect.)

In short video bursts on the social platform, Korzen –- also the author of “Bargain Junkie: Living the Good Life on the Cheap” and a humor commentator whose work has appeared in NPR, the New York Times, the Los Angeles Times, and on the Moth Mainstage –- shares snippets of the wisdom and stories she’s accumulated over the course of her career as an actor, writer and storyteller.

We caught up with the 82-year-old Korzen to chat about her newfound fame.

Reading your IMDb profile, I saw that you played a Gladys, which was my grandmother’s name, and an Esther. And you played Estelles four times.

You are crazy nuts. I had no idea. But clearly, I’m hired to play rather stereotypical Jewish women. I hope I can bring some humanity to it and give them a little charm and a little fun.

When did you start acting and storytelling?

I was a piano teacher, and a young mom, and Benni [Korzen, an artist, film producer and her husband] gave me a couple of lines in a movie of his. Miraculously, my acting career right now is the one I wish I had had in my 40s and 50s. It’s taken me a long time to catch up to the women who started way before me, and to get better at it. I was lucky that “Seinfeld” happened and I got to repeat it. Now all the casting people know me, and I get a certain amount of respect, even though I’m still a bit player basically. I have to live now to be 100. Maybe at 100 I’ll have the career that I should have had in my sixties.

On TikTok you self-identify as “the cranky New Yorker.” What does that mean to you?

Complaining in New York is a competitive sport. I can complain about my country. I love my country, I complain about my husband, I love my husband. It’s just our idea of a good time … when I’m with my friends, I like to release some pressure by sharing complaints. There are people in the world who say, “Everything’s nice. Don’t rock the boat.” And I’m not one of those people.

Perhaps “New York” is an ethnicity unto itself?

I like that idea. On auditions they ask you to write your ethnicity. I always feel strange putting Caucasian because that doesn’t really explain who I am: an ethnic-looking character actress. If there is a casting call for an attractive, older woman, I’ve been told many times, I’m too Jewish-looking and Hollywood doesn’t think of that as attractive. So it’s amazing to me that on TikTok people are telling me that I’m beautiful. I never heard that in my life, ever, until now.

So what do you think your followers are responding to?

I talk about vintage, and about ‘more is more’… I like my heavy, ethnic jewelry. But I’m not really sure where that comes from that they think I’m beautiful. Maybe it means that younger people are open to seeing beauty as not the conventional idea of beauty that I grew up with. And that’s encouraging, isn’t it?

How did you even find TikTok?

I helped organize a storytelling event for a friend’s church at a board and care institute, where [I met] Mackenzie Morrison, the daughter of the church lady who organized this and we became friends based on vintage fashion. She said “you should be on TikTok.” I said, TikTok is about young girls twerking; why would anyone be interested in me? But I have a background in storytelling. I like talking to people. And I can talk about myself, not just reporting my life, but trying to understand my life for other people and inspire other people. I’ve always said that people would respond to me, but I never could find that large audience. And suddenly I have it and it’s a miracle. We are the world’s oddest couple. And we are total soulmates.

We film about 30 in a few hours, then post two a day. Mackenzie does all the producing, she builds it, she edits it, she adds music…I could never do this. I can barely take a selfie. I do not script, edit or do retakes. I’m doing three minutes of a story that in performance would probably be 10 to 12 minutes, so the compression is a real challenge. But I’ve been saying a lot of this stuff all my life. I’ve done three solo shows, there’s a lot of material there and I’ve always yearned for a larger audience. Now I have fans all over the world: “Greetings from South Africa.” “Greetings from Iceland.” “We love you in Scotland.” This is a new world, with an audience that is not particularly Jewish, I always thought my audience was middle-aged and older Jewish women — that turns out not to be the case.

How do you deal with criticism of your TikTok posts?

I do read every comment, I shouldn’t because it’s an addiction. I want everyone in the world to love me, I get upset when somebody doesn’t. But no one is going to like everything I have to say. That’s the price I will pay for trying to be honest and open about my thoughts. I have to force myself to accept that, as we all do. It’s very easy to be liked if you have nothing provocative to say. I am trying to learn to be careful about not stimulating any kind of hate or ugliness. I want to do the opposite, to bring people together.

They say less is more, I say more and more

What was the pandemic like for you? Have you returned to acting?

There was one day in particular where we were in total lockdown. There were riots and vandalism nearby after the death of George Floyd, and fires had made the air in LA toxic. My neighbors and I agreed, this was the worst day of our lives. We didn’t see any light at the end of the tunnel: the plague, the violence, the toxic air, the isolation. Just after COVID, I got a really interesting TV job for a show that has not aired yet. I don’t think I can say its name yet for legal reasons. But I played the mother of one of my favorite actors, and it was great fun. As a freelance creative person, every job is a miracle, and every job is fun. Going to a TV set on a show like that, it was just like being paid to go to a party. It is a great gift.

What does the future hold for Annie Korzen?

I would like to write and sell more books, more significant roles on television and it would be nice to do some magazine writing. I love teaching storytelling and the craft of the personal essay. I’ll have more classes coming up with The Braid (formerly Jewish Women’s Theatre), and the LA parks department wants me to do a two-hour storytelling seminar. I would like to continue to speak my own words. I don’t know what the future is going to be. I know one thing: I’m working, I’ve been working on a book about religion with my friend, Danny Maseng, tentatively titled “A Believer and a Skeptic Walk Into a Bar.” I’d like to be like Andy Rooney, who once a week at the end of “60 Minutes,” he had a little five-minute rant. Really, I would like my life as it is, but more of it. I try to count my blessings. I tend towards depression, worry and anxiety, so I have to remind myself of how good I have it, how lucky I am.

A believer & a skeptic walk into a bar ##newbook ##letsallbefriends