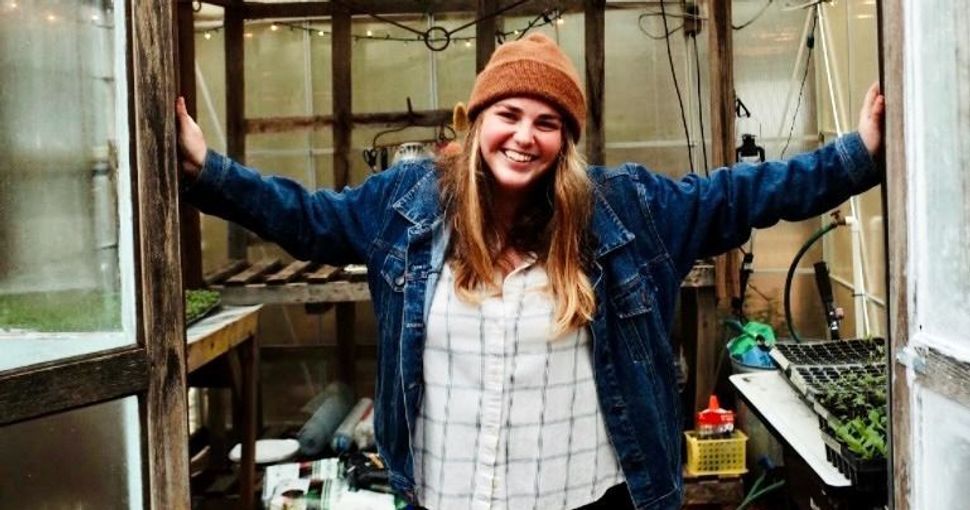 Shana Frankel at her farm in Georgia.

Ever dream of just getting away from it all? Shana Frankel, has done just that by starting a farm in rural Georgia, where she lives all by herself.

“Yes. I am out there all alone,” said the 28-year-old. “I do have visitors and family who come, but on a day-to-day basis it is just me working in the fields.”

The industrious Frankel is renting 20 acres in LaGrange, Ga. – – about 80 minutes from her home in Sandy Springs, a suburb of Atlanta – and is farming on about a quarter of it.

“I moved onto this land in December and right away I started preparing for the season, which in Georgia starts in April,” she said. “All my crops are now in – kale, different greens like Swiss chard, lettuce, green onions, radishes, basil, dill, cilantro, cucumbers, green beans, peppers, eggplant, tomatoes, okra – along with lots of different flowers,” she said. “This is my third season as a farmer – my first with my own farm.”

The rest of the property is wooded and there is two acres of pasture lands on which she cares for a variety of animals kept as pets “for my mental health” – two donkeys, two lambs, four ducks and two hens, one of which lays an egg each day that she eats for breakfast or gives to neighbors.

“I have the capacity for more, but I don’t want to bite off more than I can chew because I’m already way over my head,” she confessed.

“I had seven lambs, but two months ago five were killed by a predator when they were just three weeks old. That was a very rough introduction to having farm animals.”

She said she believes they were killed by dogs. “In the country, apparently people let out their dogs and they become wild,” she said. “They look like pet dogs. I’m assuming the dogs mauled one of the baby sheep and then chased the others into the pond and they drowned. Donkeys are supposed to be protectors of sheep. Right after this happened, the donkeys went to protect the two who are still alive.”

Providing for her Jewish community

Frankel was raised in a Sabbath-observant community where her family attends Congregation Beth Tefillah. She calls her farm MaRabu, a Hebrew word from a Psalm that praises God for the greatness of the natural wonders in the world.

She said that while growing up she noticed most of the farmers’ markets where organic farmers sold their produce were on Saturdays and only a few were on Sunday.

“I saw this [farm] as a way for me to be able to grow local, small-scale food for the community that helped raise me,” she said. “And so I am doing what is called community-supported agriculture and I have 18 families that have committed to paying me a certain amount every week. In return, I will produce for them a certain amount of flowers and produce.”

“I loved social work but I got into farming because I thought I would do social work through farming. I had studied community organizing and I wanted to do community development through growing food and plants. But once I started working as a farmer, I realized it came naturally to me and that I really loved it.”

Toiling in the fields

With help from a tractor and the owner of the property, Frankel said they dug 28 rows of pits each about 50 feet long into which they planted the vegetables. They also laid drip tape that have emitters that release the water and that are connected to a water line that Frankel said she turns on manually.

“I use Israel’s invention, drip irrigation,” she explained. “It’s a good way to conserve water. For a small farm like mine, it seems to work the best. I spent my gap year at a seminary in Israel after graduating high school and I saw drip irrigation there.”

“I finish by noon or 1 because of the Georgia heat. I have lunch, sleep and do the business side of the farm work before going back out around 6 and working until whenever I am done for the day, usually around 8:30. I feed the animals when I get up and before I go in for the night.”

She has Wi-Fi through her cell phone and joined the Jewish Farmer Network, which connects more than 2,000 Jewish farmers and growers worldwide.

“It is good to connect to Jews of all different backgrounds who are farmers. I have met farmers in Israel and Australia through their page.”

She is also on Facebook. And just last week she connected her TV to different streaming services. “I resisted it for a long time,” Frankel confessed.

Asked if she envisions making this her life’s work, Frankel replied: “My mom literally just asked me that the other day. I would like to make a life out of this. But I’m very isolated and it is very hard. If I ever want to meet someone and have the semblance of the Jewish lifestyle I was raised with, I think it would take finding someone very niche and special to join me. I’m not as observant as I once was, but I want a Jewish guy. There are dating apps. Most go by location and I’m pretty remote.”

For now, she’s looking forward to the years ahead. “I’m now thinking about my future. I don’t own the land and I expect to be renting for a few years. Farming is where I found my happiness, work ethic and my drive.”