How an upstart L.A. group crushed the Jewish internet 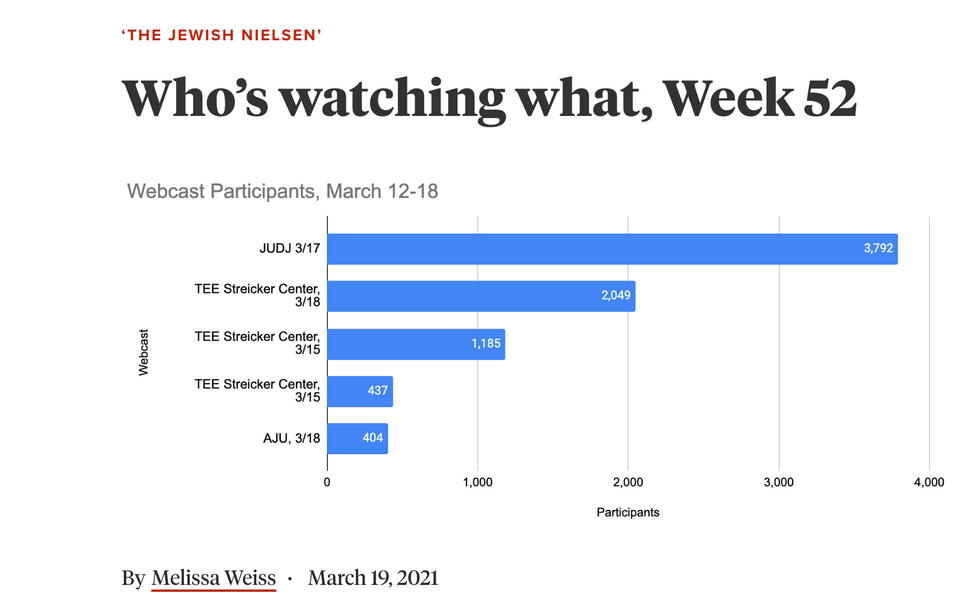 It’s only four years old, run by four volunteers, and its entire annual budget is $50,000.

But the Los Angeles-based Jews United for Democracy and Justice has managed over the past year to draw 200,000 live views to its free virtual events with some of the world’s most prominent public speakers.

Under the banner “America at a Crossroads,” the group has hosted, among others, Fareed Zakaria on the post-pandemic future, former Secretary of Defense William Cohen on foreign policy in a hyper-partisan time and columnists Jennifer Rubin, Max Boot and David Brooks. 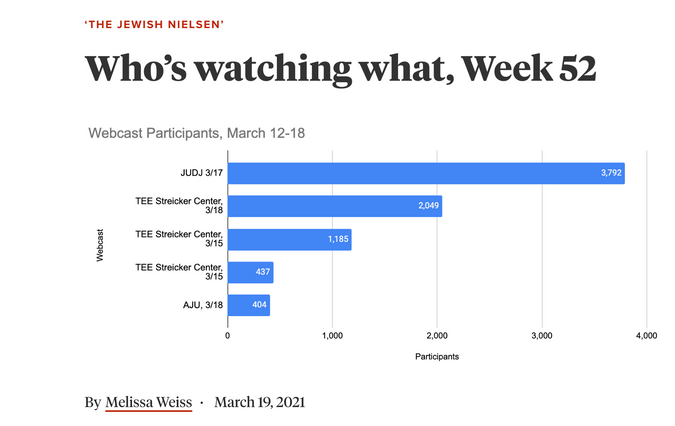 A conversation on May 5 between former U.S. Sen. Al Franken and journalist Howard Fineman, broke a little news —- Franken said he was “open to running for office again” — and broke audience records. With more than 6,000 virtual attendees, the Jews United bested the next largest Jewish organization’s turnout by several thousand, according to Jewish Insider.

“The America at a Crossroads series out of LA,” Fineman tweeted afterwards, “has rapidly become the web-based 92nd Street Y of the West.”

My conversation with @alfranken in the America at a Crossroads series out of LA, which has rapidly become the web-based 92nd Street Y of the West. Al said he was open to running for office again, and that politics CAN be serious, smart, humane—and funny.https://t.co/ddsNiPNrML

Janice Kamenir-Reznik, one of the group’s founders, said that when she saw Fineman’s tweet, she thought, “‘Uh oh, we’re becoming a Jewish organization.’”

The veteran of American Jewish communal life, who co-founded the L.A.-based Jewish World Watch, said that when Jews United started, shortly after President Donald Trump’s inauguration and ban on immigration from certain Muslim counties, the intention was not to simply join the alphabet soup of nonprofit groups connecting, educating and rallying American Jews to a cause. It was, you know, to save democracy.

I was at the January 2017 meeting of concerned Los Angeles Jews that led to the creation of the group. I was then the editor and publisher of the Jewish Journal of Los Angeles, and one of dozens who jammed the Pico-Robertson living room of the academic power couple David N. Myers and Nomi Stolzenberg, cramming into the couches and chairs, sitting on the floor and standing two-deep along the walls.

People at the meeting expressed their fear that the Muslim ban was the harbinger of more draconian measures, and their frustration that the organized Jewish community had no forceful, public response.

But the meeting ended with no firm plan.

“Nobody knew what to do,” Kamenir-Reznik recalled.

Afterward, Mel Levine, a former U.S. representative, and Zev Yaroslavsky, a former L.A. County Supervisor, joined a local Muslim-Jewish dialogue and arranged to work with churches and community groups opposing the ban. Important work, but not equal to the urgency they all felt the moment demanded.

“If we had a community that was more outspoken and engaged and had relations with more ethnic groups, I don’t know that we would have felt the need,” said co-founder David Lehrer. “Other than Jonathan Greenblatt at ADL, who was forceful and unambiguous about Trump?”

So Lehrer, Kamenir-Reznik, Levine and Yaroslavsky decided the best way to broadcast their concern to Trump administration policies as Jews was to… broadcast it. They began to host public events with powerful speakers that would make clear what was at stake.

Bret Stephens, the New York Times columnist, gave the group’s first speech that June at Stephen S. Wise Temple, saying that as a conservative he was upset with Trump.

“For Trump, truth is anything he can get away with,” Stephens said.

Over the next few years, Jews United continued to host about one in-person event per quarter at synagogues and the Skirball Cultural Center, with headliners like attorney Roberta Kaplan and former ambassador Dennis Ross.

The pandemic forced the cancellation of its March 11, 2020 event, but after four weeks, the organizers, like those of so many other Jewish and non-Jewish groups, decided to try Zoom.

It was a winning decision. People were home 24/7, including the most sought-after speakers and moderators. The website Jewish Insider, whose “Jewish Nielsen” tracks the live viewership of what had become the main, if virtual, venue for Jewish communal life, regularly listed the small organization’s events at the top.

As the pandemic wore on, more Jewish organizations picked up their Zoom game. Temple Emanu-El’s Streicker Center drew over 10,000 viewers for an event on the TV show “Shtisel,” American Jewish Committee, ADL and American Jewish University, also in L.A., would sometimes draw a bigger audience. But these are decades-old organizations with far bigger budgets. Jews United’s consistent success was yet another example of how online technologies have lowered the barriers to entry for organizations, giving the smallest groups the opportunity to reach big audiences.

You could argue that the group’s formula — matching up well-known talking heads to hot-button issues — is not exactly ground-breaking: cable networks fill hours doing the same. But people’s clickview habits aren’t a slam dunk. Last year Quibi bet it could draw millions of eyeballs to 10 minute webisodes and blew through $1.5 billion before folding, while Jews United stuck to its formula of wonkish hour-long interviews on a shoestring budget.

Each event includes a soft pitch to viewers, whose individual donations fund the series. Speakers receive a greatly reduced honorarium, if any, and without travel, venue rental and other in-person expenses, the cost of production remains low.

Lehrer, whose Community Advocates, Inc. provided some start-up funds for the talks — it now just helps get the word out — sees the conversations as a pure form of activism.

“If you’re in the community relations business, if you can help engender thinking on tough issues, you’ve accomplished your mission,” he explained.

In a highly polarized body politic, the group has made sure to host both conservative and liberal speakers.

“The only requirement is they abhor non-democratic norms,” said Kamenir-Reznik.

No Trump supporters have been featured.

Like most virtual events, the talks get a second life on YouTube, racking up 39,000 views total across dozens of programs. Judging by the comments, it seems that the YouTube audience is politically more diverse and less Jewish than those who Zoom in — which Lehrer sees as another win.

“The idea is to integrate the Jewish conversation into the national conversation,” he said.

So what happens now that live events are returning and Trump, so far, is in the rearview mirror?

Lehrer said that contrary to the organizers’ expectations, viewership has increased since the November election, from 4,500 average weekly registrants to just under 5,000.

More recent “America at the Crossroads” discussions have focused on voter suppression, ongoing civil rights struggles, the filibuster debate and how to reform the Republican Party. The next event, on June 9, will feature Prof. Deborah Lipstadt in conversation with Rabbi Ed Feinstein about the surge in antisemitism.

As of now, the group has no plans to return to in-person events. Its audience, once local, is now international, and viewer polls show that they prefer to just keep Zooming.

And just Zooming, it turns out, can get you a lot of notoriety.

Prior to his appearance on a Feb. 17 program, former Secretary of Defense Cohen told Lehrer and Kamenir-Reznik that when he went out to pick up his paper that morning in Chevy Chase, Maryland, he ran into a neighbor who said, “I’m looking forward to seeing you on TV tonight.”

Cohen couldn’t recall if he had been scheduled on CNN or MSNBC, so he asked, “Where are you seeing me?”

“On ‘America at a Crossroads,’” the neighbor said.

That, Cohen told his Jews United hosts, is reach.

How an upstart L.A. group crushed the Jewish internet