A Nazi concentration camp on British soil? A fuller history of Alderney comes to light 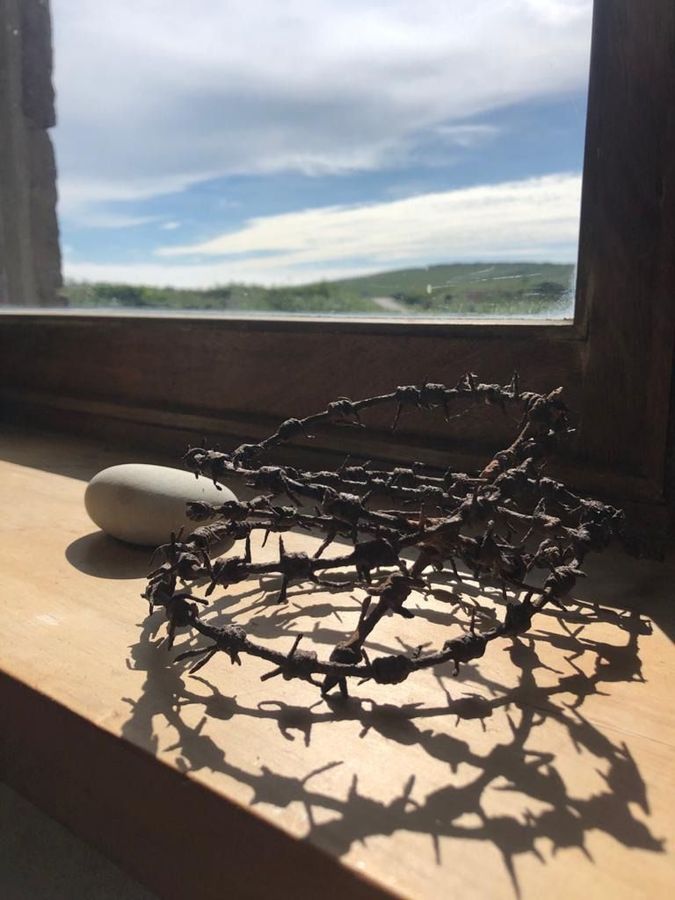 A piece of barbed wire that Matthew Diebel found as a boy still sits on the windowsill of his family house on the British island of Alderney.

It was the barbed wire that made me sense that something evil had happened. Thick, coiled and with fierce barbs every inch or so, I found it in some undergrowth on Alderney, a British island that lies just seven miles from the coast of France. You won’t find examples of it anymore, for in the 60 years or so since I found it, other remnants have rusted. I gave it to my father, who placed it on our window sill, where it still sits.

I was about six or seven, and our family had been going to the three-by-one mile island for three or four years.

Eventually, they bought a house there, which my brother, sister and I now own. My American family, like me, love Alderney and we visit every year. It is an idyllic place. Beautiful white-sand beaches. Dramatic cliffs. About a dozen Victorian-era forts, beautifully built with the local stone to guard against attacks from the French. A cute, French-looking town with cobbled streets and colorful houses.

And then there was the concrete. I didn’t realize its significance then, but our favorite beach was backed by a huge anti-tank wall, which was ugly but at least blocked the western breezes. A tall and hulking lookout tower that resembled a British cinema from the 1930s – hence its nickname, The Odeon – loomed over a quarry. And, along with hundreds of bunkers, anti-aircraft gun positions and tunnels, four huge gun emplacements sat near the highest cliffs.

Yes, Alderney, along with the other Channel Islands – Jersey and Guernsey are the main ones – had been occupied by the Germans from 1940 to 1945. But unlike the rest of the archipelago, Alderney’s residents had chosen to evacuate, leaving Hitler and his henchmen to do what they wanted without British witnesses. 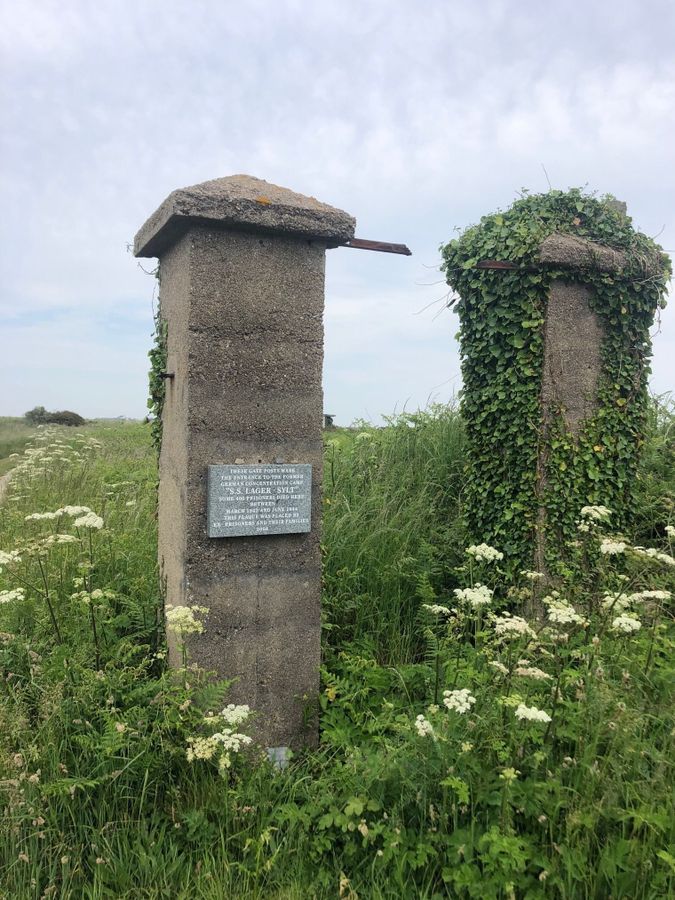 The gate posts that stood at the entrance of an S.S. concentration camp on the island of Alderney, one of the Channel Islands, during World War II. Courtesy of Matthew Diebel

What they did was enormous in scope. In the course of just over two years – from late 1941 to early 1944 – the Nazis turned the island into a stationary battleship, part of Hitler’s Atlantic Wall. Indeed, records show the Fuehrer personally ordered the Alderney fortifications. Look at a map and it’s easy to see why. Close to Normandy and a major French port, Cherbourg, it sits just a few miles from the shipping lanes of the English Channel. In fact, when the Allies launched the June 6, 1944, invasion of the Normandy beaches, the island’s guns pounded the armada, leading to battleships being sent to silence the Alderney guns.

Their work completed on Alderney in such a small amount of time was astounding. But it came at a cruel cost. Thousands of slave laborers were imported from Europe. Russians, Poles, Ukrainians, Spaniards on the wrong side of their civil war and others, all housed in wooden huts in three camps.

And then there were the Jews. Mainly from France, they made up about a fifth of the labor force. But unlike the other workers, they were kept separately in a fourth enclosure.

A concentration camp. Yes, on British soil was built Lager Sylt, which was taken over by the SS. A branch of the Neuengamme complex near Hamburg, its Auschwitz-like huts lay on the edge of the island’s airport. Hurriedly leveled to the ground by the Germans before their departure, its gateposts, however, still stand.

As a small child, I didn’t grasp their significance, but in time, prompted by my parents, I came to understand. 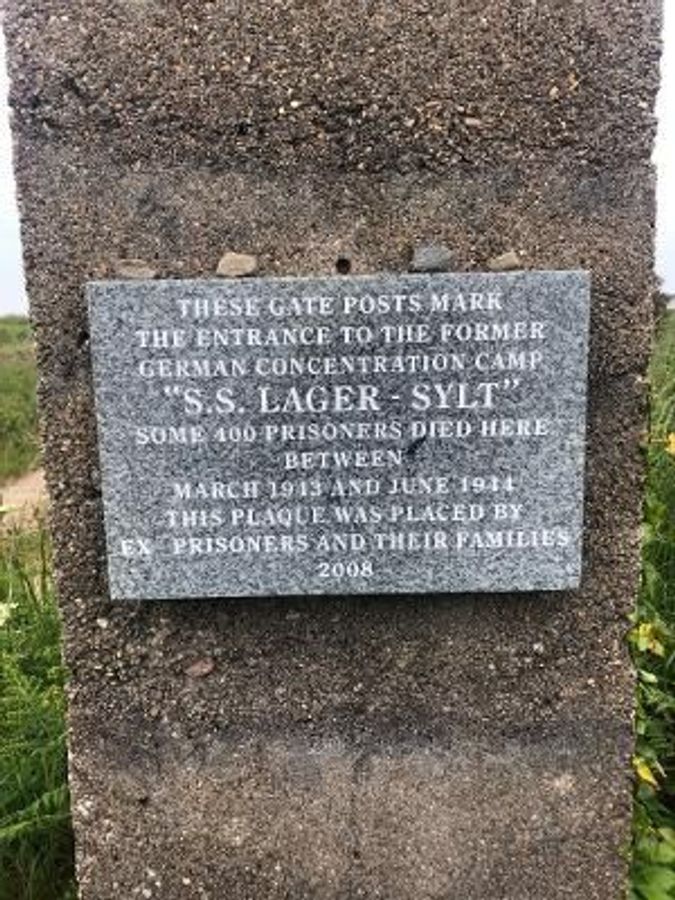 A plaque on the gate posts of the S.S. Lager-Sylt concentration camp, where thousands of slave laborers died on the island of Alderney during World War II. Courtesy of Matthew Diebel

On one of the posts is affixed a small granite plaque. It reads:

THESE GATE POSTS MARK THE ENTRANCE TO THE FORMER GERMAN CONCENTRATION CAMP “S.S. LAGER SYLT” SOME 400 PRISONERS DIED HERE BETWEEN MARCH 1943 AND JUNE 1944 THIS PLAQUE WAS PLACED BY EX-PRISONERS AND THEIR FAMILIES 2008

On top of the plaque are placed, in Jewish tradition, stones.

Now when I visit Alderney and approach the gate posts, or even think about them, my spine and scalp tighten.

It is hard for me to put out of my mind one survivor’s description of a fellow prisoner being tied to the gates and having cold water poured on him until he died, having been lashed by the island’s sometimes fierce winds. Or how dead and live inmates were hurled from the nearby cliffs.

There was another place about which, as a young child, I did not grasp the significance. It was a windswept patch of ground behind a beach called Longis Common. Once enclosed in a fence – and its rectangular shape is still easy to see — it had been a cemetery for the victims the Nazis had not thrown off the cliffs. In the early 1960s, the bodies interred there, some of them French Jews, were exhumed by the British authorities and sent to their homelands.

There were up to 400 buried and marked by the Germans, a figure that was reflected in a report made by the British military after the war that was ordered locked up in the central government archives for a century.

But, said historians and others who had read the survivor accounts, that number could not possibly be true. How could so much have been built in such a short time by workers who were systematically starved and ill-treated? Surely more must have died?

Without the government report with its interviews with hundreds of Germans and prisoners, an accurate answer was impossible, leading some to wildly speculate that as many as 40,000 had died on Alderney.

But in April this year, a copy of the document – called the Pantcheff Report after the British intelligence officer, Theodore “Bunny” Pantcheff, who led the investigation – was uncovered in the Russian State Archives in Moscow. Why did the Russians have it? Because most of the victims were from the then-Soviet Union and at the time the U.K. and the Soviets were still allies.

The sleuthing was done by Holocaust researcher Marcus Roberts, director of the Nation Anglo-Jewish Heritage Trail, who had taken a huge interest in Alderney and its wartime past.

His findings were astounding and chilling. First, it established that there had been a systematic policy of working the prisoners to death as well as encouragement of shootings, floggings and starvation. Second, it could not be possible that the 400 or so deaths counted by the British authorities were anything other than a gross undercount. Indeed, based on the evidence in the file, Roberts estimated that at least 4,000 had perished, confirming wartime reconnaissance photos that showed burials across a much wider area of Longis Common than the marked cemetery.

The reasons for the earlier undercount were several. In his report, despite it being obvious the death toll was much higher, Captain Pantcheff was working to produce evidence that could be used to prosecute the Germans who had been in charge of the island. That meant names of victims. Where they were buried. How they had died. After confirming a few hundred, he considered his work to have been done.

Then there was international politics. Relations with the Russians quickly soured, leading soon to the Cold War. At the same time, the Allies were grappling with the split-up of Germany and wanted to ingratiate themselves with the population of what would become West Germany. Hence, reports such as those of Captain Pantcheff were left to gather dust. And not a single person was prosecuted for what occurred on Alderney.

News of Roberts’ discovery soon exploded in U.K. media. There was a front-page story, continued onto two broadsheet pages inside, in the respected Sunday Times newspaper. This was followed by lengthy pieces in the Times of Israel, on British and Australian TV, as well as being featured in the more sensationalist Daily Mail.

The story also was highlighted on Twitter by Lord Pickles, a former British Member of Parliament who is now the U.K. Special Envoy for Post-Holocaust Issues and who has taken a keen interest in Alderney.

As I read and watched the accounts, I found myself thinking once again about my discoveries as a young boy. There was the barbed wire, of course, as well as the memories of the cemetery. Another thing that came to mind was my youthful discovery of narrow railroad tracks in a tunnel leading a small gun emplacement – and on them a still-intact carriage for transporting ammunition.

But most of all, I thought of the despicably-treated men who had dug the tunnels, poured the concrete and pounded in the ironwork. Those who died and those who survived.

How, I asked myself, could such evil have occurred in such a beautiful place, a place I love more than any other?

That, of course, is something we will never have an answer for.

A Nazi concentration camp on British soil? A fuller history of Alderney comes to light