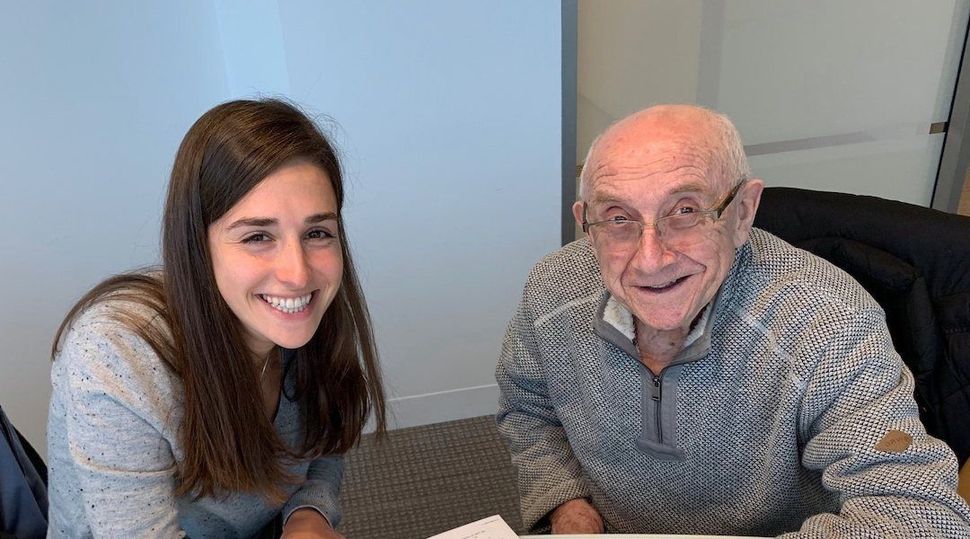 Jori Epstein with Holocaust survivor Max Glauben. Epstein wrote a book about his story after meeting at a Dallas synagogue.

(JTA) — As NFL beat writers go, Jori Epstein is likely among the more unique: Start with being a woman, she doesn’t work on Shabbat and she has penned a Holocaust survivor’s biography. The Dallas resident, who attended Jewish day schools and camps, is only 26, too.

Epstein, who attended Jewish day schools and camps, covers the Dallas Cowboys for USA Today. Her debut book, “The Upstander: How Surviving the Holocaust Sparked Max Glauben’s Mission to Dismantle Hate” (Post Hill Press) — about a fellow congregant at her Dallas synagogue — was published earlier this year.

She launched her sports journalism career with an internship at Sports Illustrated in New York while a student at the University of Texas. Epstein landed on the NFL beat when an editor at the Dallas Morning News, where she worked as a digital sports producer, suggested Saturday as her day off.

New sports writers often cover high school or college football, which would require work on the Sabbath as games typically take place on Friday night or Saturday. The NFL was a more practical option for her, since the games are mostly on Sundays.

Epstein acknowledges that she needed to bone up on football rules and proved to be a quick study. Covering the Cowboys hasn’t been a problem for her as a female reporter.

“I’m so blessed to work with management, coaches and players who respect me as a woman,” she said. “There will always be challenges for women in a male-dominated industry. I don’t think that is unique to sports.

“He looks you in the eye and is very sincere. The whole team is very respectful,” she said.

The players have shown interest in her being Jewish and the book. Wide receiver Amari Cooper asked her about Hebrew, she recalled.

The book took her about five years to write and was mostly concluded before the COVID outbreak, though she did some follow-up interviews in person with masks and socially distanced. Some were on the phone or on Zoom.

At 17, Epstein had heard Glauben, now 93, speak on a March of the Living trip in Poland nearly a decade ago. Both had attended Congregation Shearith Israel, where she occasionally was the Torah reader and he was at the bimah for a blessing next to her.

On the trip, Epstein had taken notes on what Glauben’s address to his teen audience — details in some cases that he had never disclosed. The book idea would stem from those notes, but it was only in 2016 when the two confirmed she would write the book.

Why did Glauben, who was 15 when he survived Majdanek and several other death camps, trust Epstein to write his story?

“It’s a good question,” said Epstein, who graduated from the Yavneh Academy of Dallas.

“He could see I was sincere and I cared. I think neither of us trusted each other 100% when we first started, but as we got to know each other better, we built a great trust.”

Epstein infuses the book with horror and humor, tears and laughter while taking an inside look at her steely subject. Glauben related details about a decapitated head that fell in his lap and being taken to a room by a Nazi where others have said they were sexually assaulted. His parents and brother were killed.

Despite these atrocities, Epstein said Glauben tries to let go of the hate and aims to educate. He has spoken at many colleges and other schools about his experiences. His audiences are mostly non-Jews.

“He can’t change that the Holocaust took place, but this is a way of creating purpose out of the past, by teaching his story to other generations,” Epstein said. “I think the first March of the Living empowered him as he saw he could take the worst chapter of his life and use it for good by educating people.”

The book doesn’t end with his liberation. Glauben went on to marry a woman named Frieda, who liked the way he danced — he once taught the tango at a dance studio. He had a number of jobs, including owning a garment supply firm.

Glauben is among a select group of survivors to take part in holographic technology that allows viewers at a Holocaust center in Dallas to ask “him” questions. A response is provided by one of his 1,146 prerecorded answers.

Epstein interviews all seven of Glauben’s grandchildren for the book. They consider him a hero – and wonder how he may have been different if not for his Holocaust experience.

“He’s committed to being an inspiration and motivation, not just a commemoration,” his granddaughter Sarah, 24, said in the book.

The post This Orthodox sports writer can’t write on Shabbat — so she covers the NFL appeared first on Jewish Telegraphic Agency.