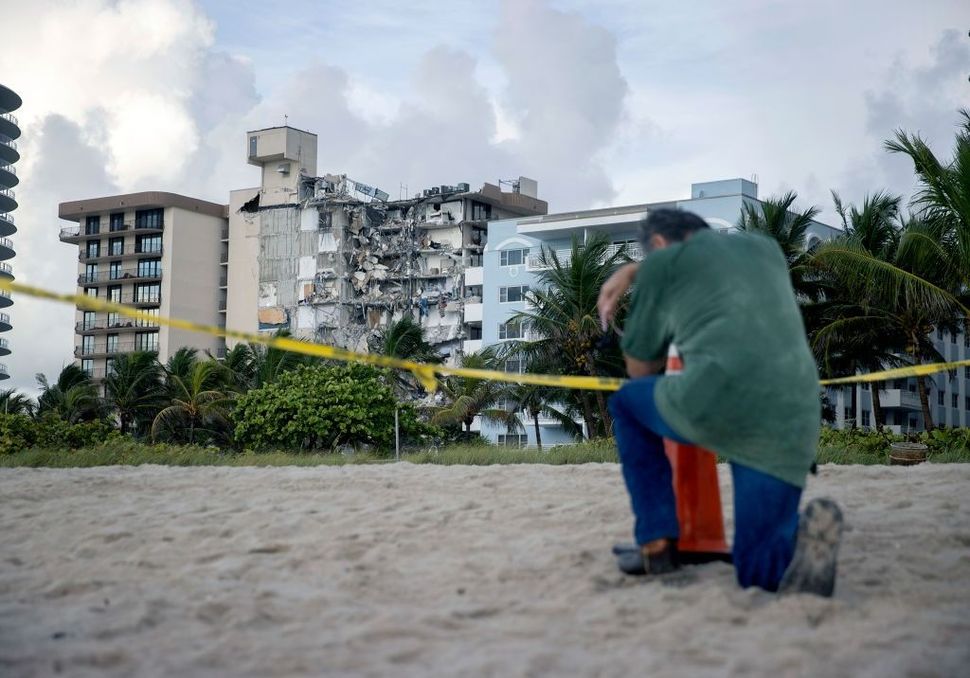 SURFSIDE, FLORIDA – JUNE 25: A man prays near where search and rescue operations continue at the site of the partially collapsed 12-story Champlain Towers South condo building on June 25, 2021 in Surfside, Florida. The man, overcome with emotion, said he had lost a relative in the collapse. Over one hundred people are reported as missing as the search-and-rescue effort continues with rescue crews from across Miami-Dade and Broward counties By Joe Raedle/Getty Images

Jacob Solomon has responded to hurricanes, terror attacks and Israeli wars — but nothing prepared him for the Champlain Towers South collapse.

The president and chief executive officer of the Greater Miami Jewish Federation was awakened early Thursday morning with news that huge swaths of a condominium just north of Miami Beach had fallen. He spent much of the day at the reunification center a few blocks from the disaster, where first responders and chaplains attended to those who had escaped the building and family members who did not yet know the fate of loved ones who lived in the 12-story building.

On Friday, Solomon took time to speak to the Forward about what unfolded after the towers fell, and how the Jewish and larger community is responding. This interview has been lightly edited for length and clarity.

You have a colleague who lived in the building. Is she OK? 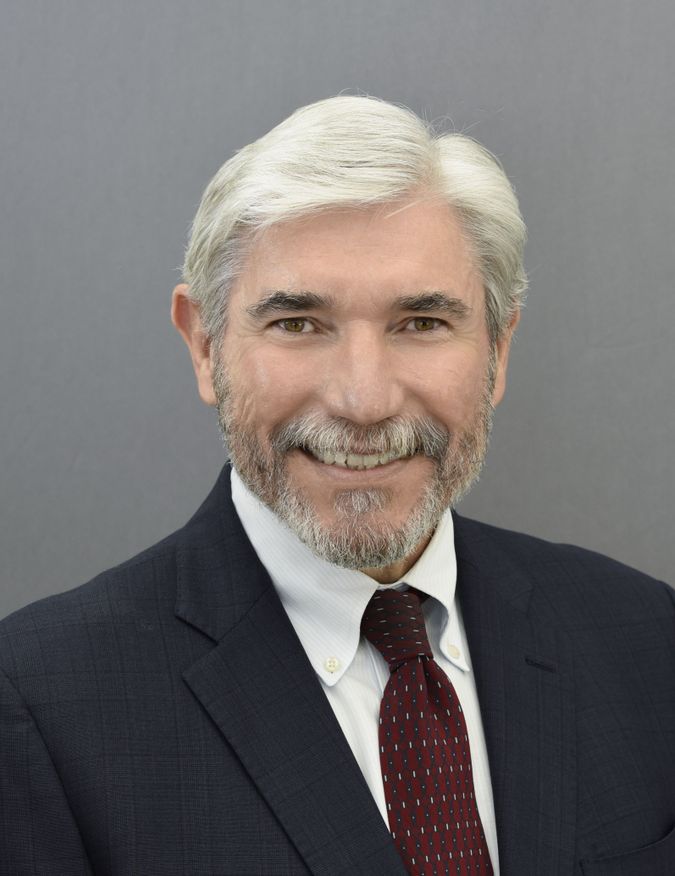 After I learned about the collapse one of my colleagues pointed out to me that Ofi Osin-Cohen, who is our women’s philanthropy director, lives in the building with her husband Barry. So there were some extraordinarily long and fraught moments before someone told me that they heard from Ofi and that she and her husband were OK. We didn’t know at the time how harrowing it had been for her to escape until we watched that clip of her on the “Today Show.” I can’t say how proud I was of her. And when I later reached her by phone — the sense of gratitude I felt and the powerful relief of hearing her voice — it was very moving.

What was it like at the reunification center, where people are waiting for what could be horrific news?

It was searingly painful. But in a sense it was also inspiring. You had people coming in from all over, just offering to help. There was a retired member of the Yonkers police department, wearing his Yonkers t-shirt. He lives here now and he said he worked 9/11 and he just wanted to help. Then there was a young man wearing a kippah carrying boxes of kosher pizza and offering everyone a slice. I saw lots of kippot but also so many people who were not identifiably Jewish. It was amazing to see this melting pot of a community working together.

You’ve been with the Miami Federation for 40 years. How is this crisis different from others?

I was the executive here during Hurricane Andrew. I know how to do hurricanes. I know how to respond to terror attacks, and wars in Israel. But this is a first for me. It’s really disturbing to me in a profound way. It feels different — its randomness, its magnitude. (Note: at the time of publication officials had counted four dead and 159 missing.) It’s a finite number but the pain and grief is so incredibly profound. We all read this story and we know that “but for fortune go I.” The ripples of the loss … it’s a communal wound we’re dealing with.

What about the government response?

The heroism of the first responders is just breathtaking. And it’s so popular to talk about the failures of government and the dysfunction of electoral politics but watching Miami-Dade County and the municipalities of Surfside and the neighboring communities working so beautifully together just made me feel proud as a citizen.

You received a call from new Israeli Foreign Minister Yair Lapid the day the condo fell. What did he say?

I got a call from him and also from the new minister for diaspora affairs, Nachman Shai, and their messages were just beautiful. So often with our relationship with Israel, it’s us reaching out to express solidarity with them. So to have them call us with love and support meant so much to me. I remember being in Israel at the time of 9/11, on a solidarity mission during the Second Intifada, and how moved I was by Israelis who embraced us. It reinforces for me that we’re just one big Jewish family. It’s just like hearing from a relative during difficult times. It’s comforting and empowering.

How can people help?

If they’re in Miami, we are mobilizing volunteers. But the synagogues are telling me that they’re overwhelmed by donations of goods. I don’t think they’re required at this point. I think the best way to help is to participate in the [Federation’s] fundraiser. We don’t yet know what the needs will be exactly but we know there will be requests for housing assistance and counseling. It chokes me up that one of the needs will be for funeral assistance.

How much has the fundraiser collected so far?

We sent out the announcement for the fund yesterday, sometime mid-afternoon, and 24 hours later we have something like 2,000 donations and have raised about $250,000. We don’t have a fundraising goal.

What do you want people to know about what’s happening in Surfside now?

The outpouring of love, support and kindness is coming from near and far, from the U.S., Israel and all over the world. My inbox is usually in pretty bad shape but now it’s filled with so much love and care. And I know my colleagues are experiencing the same thing. I’d just like people to know how grateful we are for this outpouring.