In time of tension, a cultural event brings Israelis and Palestinians together 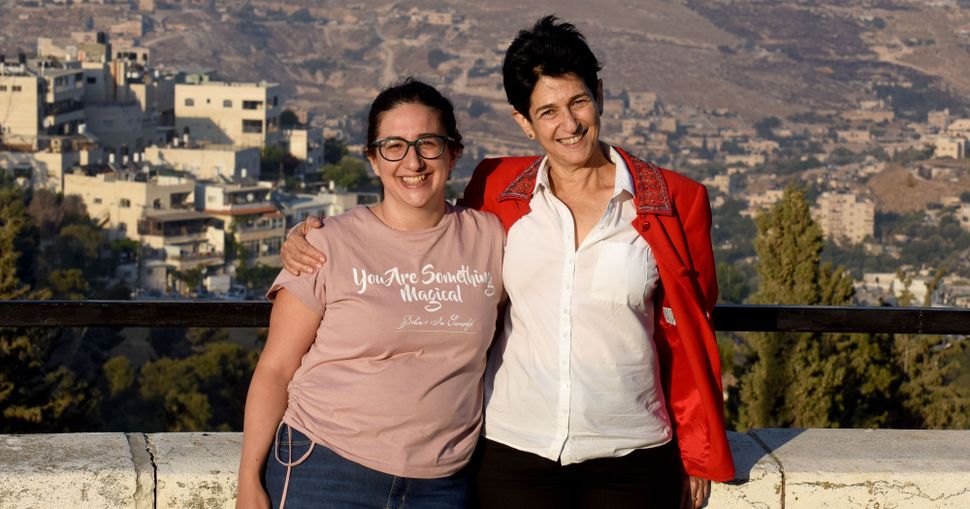 Left to right: Riman Barakat and Naomi Block-Fortis of Mekudeshet in Jerusalem. Photo by Debbie Hill

This article is adapted from The Branch, a monthly podcast exploring individual relationships between Jews and Arabs, Israelis and Palestinians. The Branch is produced by Hadassah and created by Dina Kraft, a journalist based in Tel Aviv. Check out the latest episode of The Branch on its website, or wherever you listen to podcasts.

Throughout the long months of the COVID pandemic, the staff at Mekudeshet, a Jerusalem cultural organization that creates original arts and music events around the city as a way to connect its people, could not wait until the health crisis passed in order to bring people those together — Israeli, Palestinian, religious and secular — for a summer of high-energy concerts, performances and art installations.

But by May, simmering tensions in Jerusalem had erupted into a new round of conflict with its cacophony of stun grenades, rage-filled chants, hurled rocks, rubber bullets and at its climax — a pair of rockets fired by Hamas from Gaza, 60 miles away, triggering the wail of air raid sirens. Eleven days of war followed and as the fighting raged, two women, Naomi Block-Fortis and Riman Barakat, who help lead Mekudeshet (Hebrew for “sacred”), were hard at work with their staff figuring out how to best regroup and reconfigure their plans in a way to use culture to help heal a city.

Block-Fortis, an Israeli and former dancer who led the Bat Sheva dance company for years, and Barakat, a Palestinian from East Jerusalem who was long involved in peacebuilding efforts, were keenly aware of how fragile relations are now — and how deep the sensitivities run.

The result of the organization’s planning was their first event after the fighting: a low-key evening held around sunset at Feel Beit, a combination bar, event space and terrace in the Abu Tor neighborhood. Abu Tor is located along what’s called the seam line between Jewish and Palestinian neighborhoods in the city and it had been the scene of fighting between Jewish and Palestinian youths during the unrest.

The building and its plaza, overlooking a valley that leads to the Old City, is clad in Jerusalem’s signature milky limestone. The name, Feel Beit, is a play on the word “home” in Arabic and Hebrew. Its name is the very goal of Block-Fortis and Barakat’s work: a place where everyone can feel at home.

On that recent evening, Block-Fortis strode through the smattering of tables on the plaza, as men and women chatted, sipping lemonades and drinking wine amid the sounds of the low electronic pulsing of a DJ processing the sounds of a musician next to him strumming the qanun, a traditional Middle Eastern stringed instrument. Musicians that play Eastern and Western instruments will be performing throughout the summer, with the hope that music can do the work to bring people together. As one staff member noted, words are failing right now. 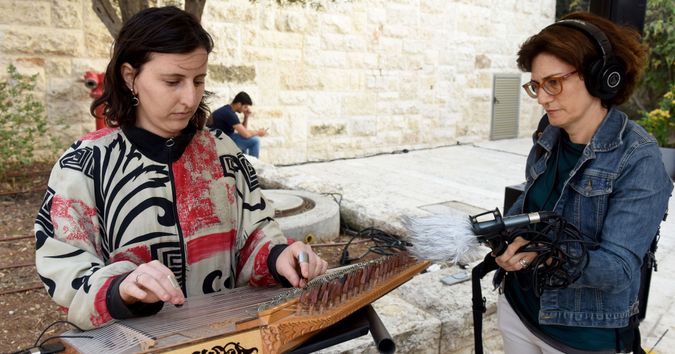 Dina Kraft (left), podcast host and author of this article, records musical sounds at the event in Jerusalem. Photo by Debbie Hill

“I think we managed to create the right atmosphere, which is very sensitive to the neighborhood and the situation and this moment,” said Block-Fortis, surveying the scene. In one corner of the venue, children were learning how to make a kite, and in the center of the plaza, an artist named Joanna Jones, wearing white, was braiding together palm tree fronds and fashioning them in a circle around burning frankincense, creating a makeshift altar of calm.

“We were imagining what could it be, that it shouldn’t be partying, that it should be sensitive to Palestinian content,” said Block-Fortis, who directs Mekudeshet.

It was important, she and Barakat said, to create a “healing atmosphere.”

“We wanted to allow people just to come here and feel they can be safe,” added Barakat whose job is reaching out to Palestinian audiences and artists from East Jerusalem to attend and take part in Mekudeshet’s concerts, performances and art shows.

It’s a challenge in a city where there is limited social mixing between Palestinians and Israelis, and especially after the recent violence, when residents actually fear one another.

Barakat tries to keep focused on the mission of connection through culture, even in the face of the boycott movement, which in the past has tried to shut down their events, and in the face of another cycle of conflict.

“You have to stand and let the storm pass….The craziness that goes on is not our responsibility,” said Barakat, adding that their responsibility is trying to lay the groundwork for ending conflict by providing an example of another way to peacefully coexist in Jerusalem.

In time of tension, a cultural event brings Israelis and Palestinians together