Meet the Jewish trio who just raised $1.35 million for Surfside

The website for the Surfside Tragedy Central Emergency Fund

The three 30-somethings met just a few weeks ago at a Marriott hotel pool party one of them threw to welcome himself to Surfside, Fla. They lamented that the community lacked a young Jewish professionals’ group, and decided to start one. The first event they organized was a Shabbat dinner at their synagogue, the Shul at Bar Harbour, that drew about 85 people.

Then, around 1:44 a.m. last Thursday, their nascent WhatsApp group lit up with news of the collapse of Champlain Towers South. By 3 a.m., they had launched a GoFundMe to support the survivors and families of the victims, setting a goal of raising $5,000.

“We couldn’t go on the scene, we’re not EMTs, we’re not physicians,” explained Efraim Stefansky, 35, the consultant who moved to Surfside from New York in April. “The only thing we can do at this point is raise money.”

His partners in the venture are Svia Bension, 32, who works in finance, and Zushie Litkowski, who is 35 and works in real estate. They call themselves a “tripod” and their group EZS Events — EZS for Efraim, Zushie and Svia. Its fundraising campaign has been endorsed by the Shul and the local chapter of Hatzalah, the Orthodox emergency-medical services group, and is now hosted by the Chesed Fund, a crowdfunding site.

The trio started by sending the GoFundMe link to the WhatsApp group, which had about 200 members — and everyone else they know. Their canny, relentless marketing and an international community eager to support the survivors and families of Surfside made it an astonishing success. 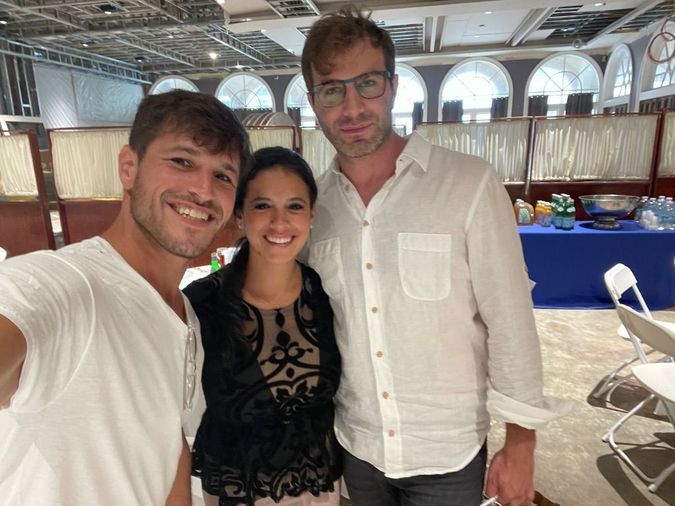 The fast friends who formed a Jewish young professionals group only a few weeks ago have now raised over $1.3 million for Surfside victims. From left to right: Zushie Litkowski, Svia Bension, and Efraim Stefansky. Courtesy of Efraim Stefansky

“When something happens like this, you don’t think about it,” said Litkowski, who is also 35, and has lived in the area for six years. “Everyone is just, your brother, you know what I mean? If someone is stuck, you have to help them.”

There are some large individual gifts listed on the campaign site, like $18,000 from someone named Jordan Kavana. There are also fundraising teams — one from the travel website DansDeals.com, and several from chapters of AEPi, the predominantly Jewish fraternity, and area synagogues.

All three have full-time jobs, which has made sleep a precious commodity since the tragedy. Litkowski said he has been getting only two hours a night — this may have to do with him keeping his phone set to notify him every time a donation comes in.

They said they planned to distribute the money to all families affected by the disaster, not just Jewish ones, and would rely on the Shul and the Hatzalah chapter for guidance.

Beyond that, the details are still being worked out. All three said they would not take any pay for organizing the campaign, though Litkowski joked that he might reimburse himself $22 for what he spent to start the EZS website.

In addition to the online fundraiser, EZS helped spark the thousands donations of clothing, household items and basic supplies that poured into the Shul in the days after the condo collapse. The “tripod” then used its network to get help from all over town sorting, boxing and stacking the loot in the synagogue’s social hall.

Still, Bension noted, “I wish we didn’t have to do this.”

“Every good deed that comes out of this, it doesn’t make me feel better,” she said. “It should be under better circumstances — people will always be in need. It’s kind of a lesson not to wait for this.”

Meet the Jewish trio who just raised $1.35 million for Surfside