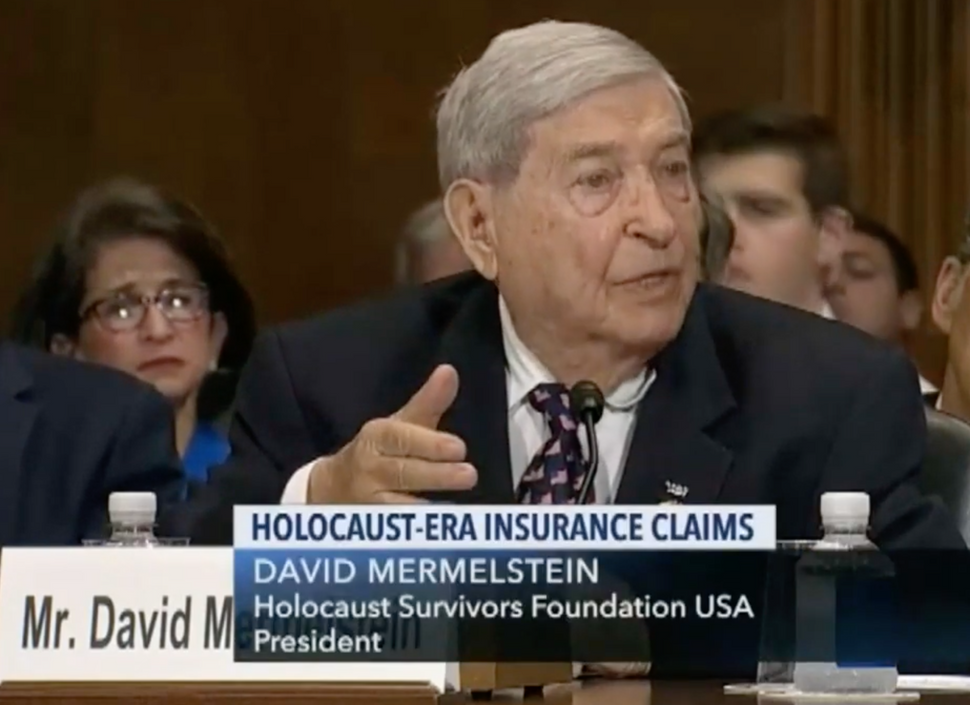 David Mermelstein, a survivor of Auschwitz who devoted much of his life to helping fellow survivors and educating children about the Holocaust, died July 6 in Miami at the age of 92.

Mermelstein regularly spoke to elementary, middle and high school students in Miami-Dade County. In addition, he participated in special mentor programs at Miami-Dade College and the University of Miami.

Mermelstein was born in Kevjazd, Czechoslovakia in 1928. His father, Martin, owned a business selling beer, wine, liquor and cigarettes. In 1944, he, his parents, four brothers, sister and grandparents were all deported to the Beregsatz Ghetto and then sent to Auschwitz. He was the only member of his family to survive.

After the war, he spent two years in a displaced persons camp and came to the United States in 1948. He met his wife, Irene, another survivor, in New York, and after a honeymoon in Miami they decided to settle there. Along with other survivors, he formed a group called the New American Jewish Club, which held parties and raised funds for the State of Israel. In the 1990s, the group raised funds to help fellow survivors cope with aging, illness and poverty and to help with the burial of survivors who died without money for a proper funeral.

More recently, he had urged Germany to pay the full cost of all survivors’ medical, mental health and long-term care needs.

“David’s legacy includes decades of personal education of thousands of people of all ages through the schools, community groups, churches and synagogues, the Holocaust Memorial, the March of the Living, and on and on, who were mesmerized by his and Irene’s telling of their experiences,” recalled Sam Dubbin, the attorney for the Holocaust Survivors Foundation. 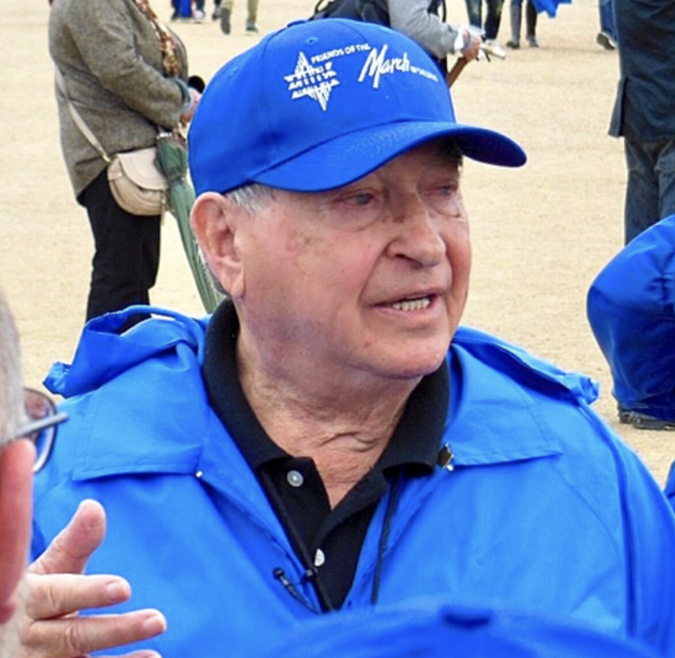 David Mermelstein on March of the Living in Poland.

Mermelstein owned and operated dry cleaning businesses in Miami, and from his leadership position in several Holocaust survivor organizations he advocated on behalf of fellow survivors. He was also involved in the Greater Miami Jewish Federation, the Holocaust Documentation and Education Center, the Holocaust Memorial Miami Beach and Friends of the March of the Living.

In 2010, Mermelstein, as an officer of the Holocaust Survivors Foundation, criticized the Conference on Material Claims Against Germany for giving $50,000 to make possible a concert by the National Opera Orchestra that chronicled the defiance and resistance of Jewish prisoners at Terezin, a transit ghetto-camp that was used as a way-station for those being sent to other camps to the east and as a camp for prominent individuals whose disappearance might be widely reported.

“It doesn’t make sense spending money on anything now other than needy survivors – and there are plenty of them,” Mermelstein said.

The Claims Conference said the money was part of the $18 million it had set aside each year for education, research and documentation of the Holocaust.

Three years earlier, Mermelstein, then president of the Miami Holocaust Survivors, said he believed the $18 million annual education allocation should either be eliminated or cut in half to provide more money for needy survivors.

“The needs get worse as we get older,” he said. “Until now we didn’t have to worry about wheelchairs. But today, I helped a man get a wheelchair” who could not get to the synagogue without it.

If just $1 million of the $18 million were allocated for the care of survivors, Mermelstein added, “we could add to the hours of homecare” and other services survivors receive.”

Mermelstein was also outspoken in his efforts to convince members of Congress to pass legislation that would allow survivors to sue insurance companies that failed to pay beneficiaries of life insurance policies sold to Jews during the 1930s and 1940s.

He maintained that survivors were simply “attempting to restore our rights and dignity” in seeking to collect on those policies. But federal courts, including the U.S. Supreme Court, claimed that an international Holocaust claims commission formed in 1998 was the only way to resolve survivors’ outstanding insurance policy disputes.

In a letter to family friends and teenagers who wanted to learn more about his life, he recalled seeing a “plaque on our house that said, `This property insured by Generali.’ Other survivors remember similar signs, or remember the agents coming around to collect premiums every two weeks and being told by our parents that this was for our protection in case something happened to the family. But after the war, the companies refused to pay the policy proceeds that survivors were entitled to and desperately needed.”

In September 2019, Mermelstein testified before the Senate Judiciary Committee as president of the Holocaust Survivors of Miami-Dade and said he had trusted the International Holocaust Claims Commission to fairly resolve survivors’ claims. But after he applied to the commission, he said he was told it was not able to find his father’s name and then received a $1,000 check as a “humanitarian payment,” one of 34,000 such checks it sent to survivors and heirs.

“Survivors deeply resent the idea of a `humanitarian payment’ instead of the funds we know our parents set aside in case of a disaster,” he testified. “The whole thing was an insult to survivors, and it still is. … Without action by Congress, the insurance companies will be the heirs of the victims of the Holocaust.”

Mermelstein is survived by his wife of 70 years, Irene, daughters Helene and Debbi, son Michael and three grandchildren and one great-grandson.