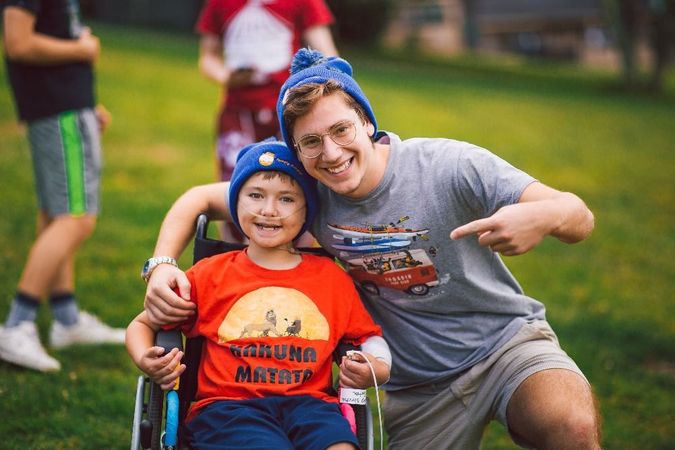 As the pandemic subsides, Jewish camps across the nation are taking precautions against COVID-19, and have opened for a mostly normal summer. But camps that serve children with chronic diseases and disabilities, who may be particularly vulnerable to COVID, have had to be extraordinarily careful to protect their campers — even if it means postponing opening another year.

Camp Simcha, which typically operates a sleepaway camp for boys and girls with cancer on 125 acres in the Catskill Mountains in Glen Spey, N.Y., will shift this summer to day camp form in seven cities in the U.S. and Israel to keep campers safe. The camp will offer four overnight sessions at the Glen Spey campus for children and teens with disabilities and chronic illnesses. In total, more than 1,000 children are expected to take part in Simcha programming this summer.

“We have pivoted during COVID to continue to meet the needs of our children and their families,” said Matt Yaniv, chief marketing officer for Chai Lifeline, which funds Camp Simcha.

Camp Simcha first launched the day camps to temporarily replace the sleepaway camp experience last year in response to the pandemic. Called Camp Simcha Without Borders, it opened on June 28 in Miami this year and will open later in the summer in Chicago, Baltimore, Lakewood, N.J., Los Angeles, Israel and Deal, N.J. for both children with cancer and those with chronic illness or disabilities. There will be two one-week sessions in each location — one week for girls and one week for boys.

Although Camp Simcha canceled its boys’ sleepaway camp, an abbreviated sleepaway camp for girls with cancer will still be held. Instead of running for two weeks, it will be held over an extended August weekend for about 30 girls. A full medical team will be on site with a sophisticated medical facility and an oncology team, and each girl will be assigned her own counselor.

Camps for children with cancer and other health challenges offer the chance to to fit in and have fun in ways they couldn’t elsewhere. Rivka Buchbinder, 23, a three-times cancer survivor from Minnesota who attended Camp Simcha as a camper for 10 years, recalled bonding with other campers as soon as she arrived.

“During the rest of the year I remember explaining to people what it is like to lose our hair from chemo — running your hand through your hair and having it come out in chunks…I remember getting off the bus and seeing kids who didn’t have hair and who looked like me,” said Buchbinder.

“And when I told them that just thinking about a particular food made me nauseous, they said they had the same thing,” she continued. “We may have had a different diagnosis, but we all knew what it was like to have our childhood ripped away from us.”

“Our number one priority is the health and safety of our campers,” said Rabbi Simcha Scholar, CEO of Chai Lifeline, which funds the camps. All its programs follow CDC and local health guidelines, staff are vaccinated, every child is required to take a [COVID] test before entering camp and more cleaning and maintenance staff have been hired to keep the grounds as sanitary as possible, he said. 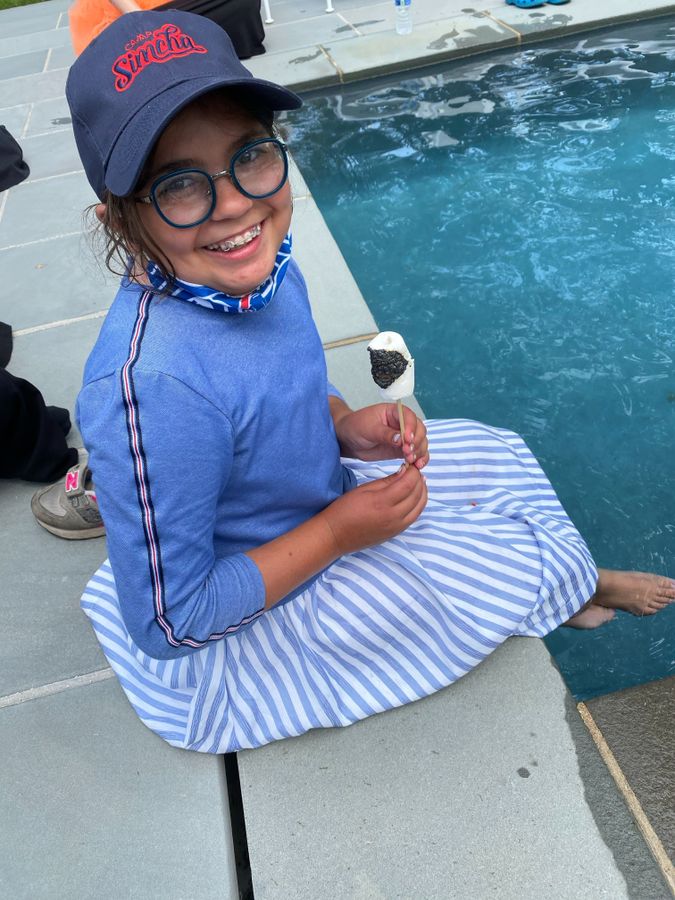 A few parents have decided not to send their children to camp because of COVID, but most say their kids badly need camp this summer, Scholar said. “They want a break from isolation, which they are sadly all too familiar with, and are yearning to reconnect with their friends and Camp Simcha family.”

Another camp group, SUNRISE ASSOCIATION DAY CAMPS for children with cancer ages 3 ½ to 16 and their siblings, has already opened as scheduled in Baltimore, Atlanta, three sites in Israel and at three sites in New York. Like Camp Simcha, they are tuition-free and are taking extra precautions to protect campers and staff from COVID.

Everyone will wear a mask at all times when indoors, said Arnie Preminger, president and CEO of the Sunrise Association, which expects 2,000 children to take part in Sunrise camps this summer — the vast majority of whom had enrolled in 2019.

The camps have mandated COVID vaccinations for all adult staff 18 and older and are encouraging junior counselors 16 and 17 to get vaccinated. “We are not mandating it because they are minors and we feel it is more their parents’ responsibility to make that decision. Most have chosen to vaccinate,” he said.

More buses will be added this year so that children can sit in every other seat to ensure they have three to six feet of separation. The camp has also requested that all bus drivers be vaccinated. Bus windows must be open and everyone on the bus must be masked.

And instead of freely mingling with other campers, children will be assigned to pods or small groups of no more than 15 to minimize COVID contagion. Campers will also be encouraged to wash their hands frequently and distance themselves from anyone with a cold. And once campers leave a site, a cleaning crew will come in with disinfectant wipes to clean the whole area.

In addition to following CDC guidelines, the camp assembled a medical task force comprised of a pediatric oncologist and infectious disease specialists who helped develop guidelines for reopening.

“We didn’t want to make these decisions on our own,” said Preminger. “We wanted to follow the medicine and the science.”

Camp Sunrise is a nonsectarian camp founded in 2006 as part of the Friedberg JCC in Oceanside, Long Island. It welcomes children of all backgrounds, including Arab Israeli children in Israel. “Cancer doesn’t discriminate,” said Preminger.

Camp families who don’t feel comfortable attending camp in person this year have another option. “We are not pushing people to come,” Preminger stressed. A virtual program will enroll as many as 150 campers from all states.

Sunrise also runs a camp program for children in hospitals which relies on a paid staffer and volunteers. Before COVID, Sunrise had sent volunteers to 36 hospitals in the United States and Israel with as many as 120 volunteers. Now they are back in nine hospitals and expect to return to all 36 by the end of the year as they rebuild their volunteer base. 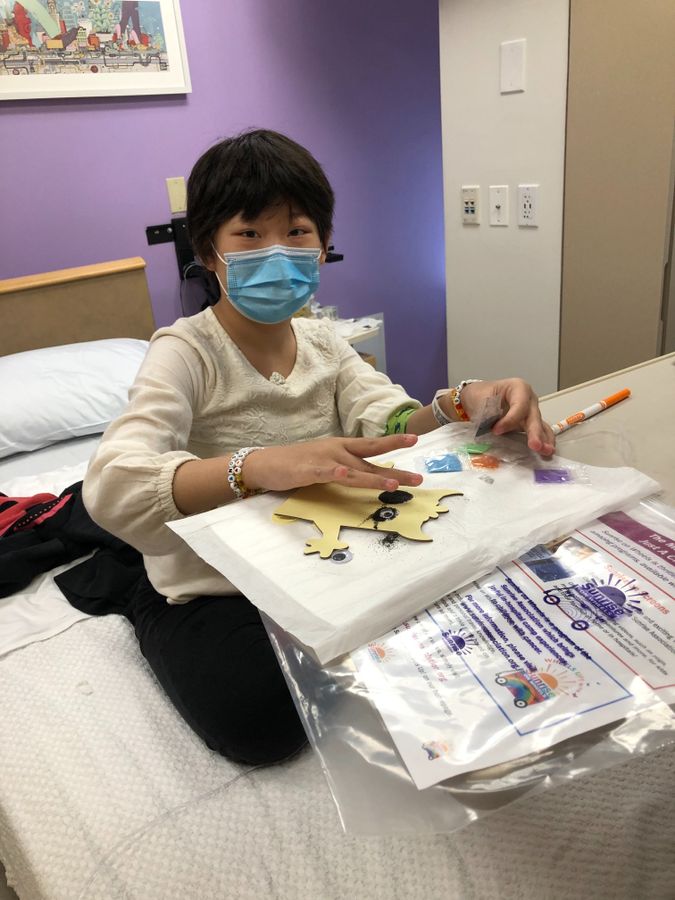 A girl working on an art project provided by the Long Island-based Sunrise Association, which runs camps for kids with cancer and other health challenges and also brings “camp” to kids in hospitals. Courtesy of SUNRISE ASSOCIATION

“We bring camp to the hospitals, particularly the outpatient areas where kids get chemotherapy,” Preminger explained.

“Instead of them being afraid in the waiting room, we distract them with toys – from card games to computers and board games,” he said. “We bring in a new craft project every week so the children get totally engaged while waiting for chemo. In some hospitals, we sit with the children while they get chemo and we play games with them.”